The project is 30 kilometres west of Chillagoe near the Mungana, Red Dome and King Vol mining operations with Cairns being the closest major city in relatively close proximity.

The principal target type in the area is Intrusion Related Gold (IRG) deposits, and there are several such bodies known in this area that display features typical of the nearby Red Dome and Mungana IRG deposits.

A total of 466 shallow soil samples were collected across eight selected targets in October/November 2020, however, two of the original targets were inaccessible.

The prospects that were tested featured a mix of extensive untested historic workings, multiple rock chips with anomalous gold, copper, silver and base metals, and magnetic anomalies suggestive of pipe-like buried intrusions with no recorded previous mineral exploration activities.

The prospects were selected from many occurrences across a 25 kilometre by 20 kilometre area.

They were drilled to solid basement and an end-of-hole sample collected.

The average depth across all 466 samples was 1.2 metres, which was shallower than expected and indicates limited dispersion of anomalies.

The following graphic shows the various areas targeted, along with the tenor of mineralisation identified. 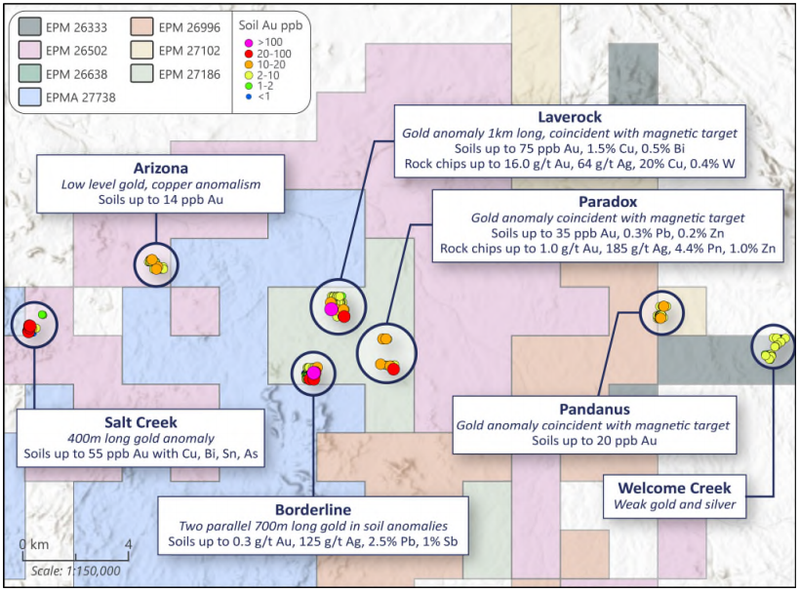 Scanning results from the various areas, one of the standouts was Laverock where Thomson identified a 1 kilometre long magnetic anomaly in the southern part of the area and four lines of auger sampling took place across it.

At the end of one of the lines was a shallow old pit which had visible copper mineralisation, and this rock chip assayed 16.0 g/t gold, 64 g/t silver and 20% copper.

The borderline prospect also delivered promising results with trenches where historical exploration had been conducted revealing a highly prospective zone where rock chips were gathered.

Salt Creek appears promising - is this a buying opportunity

Salt Creek (EPM26502) is shaping up as an extremely promising copper-gold prospect.

A line of old shallow pits with two shafts at either end are spread out over a 200 metre long iron and quartz-rich altered lode zone in schist.

As indicated below, Thomson’s soil testing intersected gold anomalies on all three lines with up to 55 ppb gold, extending the anomaly to at least 400 metres, open along strike in all directions. 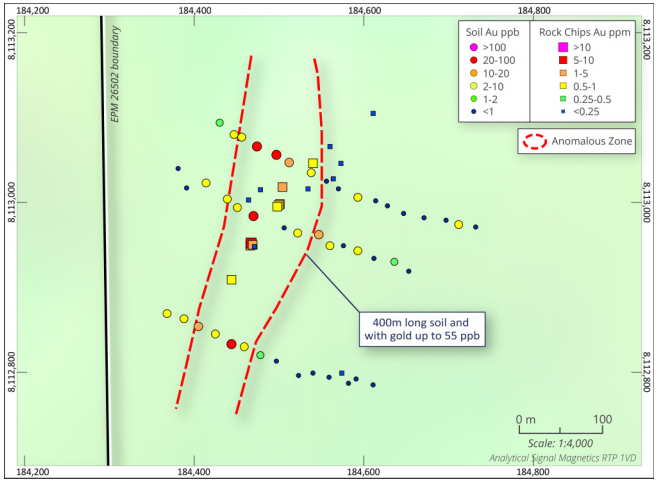 While they have retraced from this high in recent weeks, this can probably be attributed to profit-taking, and with further exploration results pending, this pause in momentum could represent a buying opportunity.