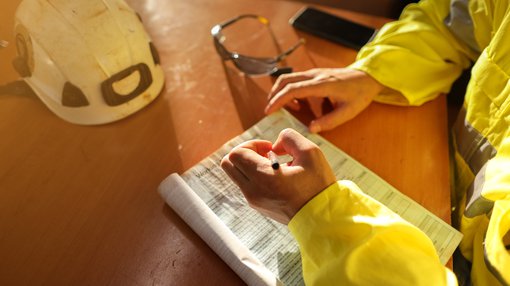 Thomson Resources (ASX:TMZ) has announced its entry into a Binding Terms Sheet which would expand its land package at the Harry Smith gold project by more than 70 square kilometres.

Along with this, TMZ has also lodged an Exploration Licence Application for ELA6181 (Bolaro), the land between the Barellan tenement and the Harry Smith gold project.

These two EL acquisitions when added to existing EL’s and ELA’s held by Thomson in the Lachlan Fold Belt will increase Thomson’s landholding to an aggregate of just over 2,360 square kilometres.

Importantly, management believes that its improved understanding of the broader area that has been enhanced by drilling at Harry Smith will assist in guiding the group's intended exploration initiatives across the new landholdings. 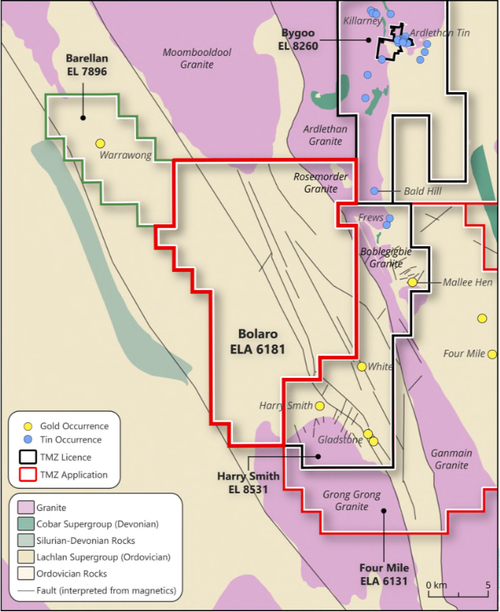 The Barellan target has similar host rocks to the Harry Smith gold project.

Recent phase 3 drilling confirmed that Harry Smith possesses a large gold system, enhancing Thomson’s understanding of the mineralisation and controls within that project which can be leveraged for future exploration activities at Barellan and Bolaro.

Within Barellan is the Warrawong Prospect; one which has been the focus of exploration by the vendors. It contains a one km long anomaly with subtle gold levels in the soil and basement interfaces.

The ‘discovery’ of the Warrawong Prospect dates back to the 1980’s.

The other indication of gold mineralisation in the immediate district is the small hand-excavated mine 600 metres to the north, which presumably produced a small quantity of gold and is now backfilled.

A channel rock chip sampling program and shallow auger drilling program was conducted by Carpentaria Resources in 2014. The survey defined a 200m x 30m plus 50 ppb bedrock gold (plus arsenic and antimony) anomaly open to the south-east.

At the centre of this anomaly is a contour drain that returned 60 metres at 1.5 g/t gold (including 10 metres at 4.5 g/t gold) in historical work that was resampled where possible and returned 32m at 0.5g/t gold.

A maximum result of 1 metre at 8.8 g/t gold in an area overlapping the historical high-grade result was returned confirming the presence of high-grade mineralisation. 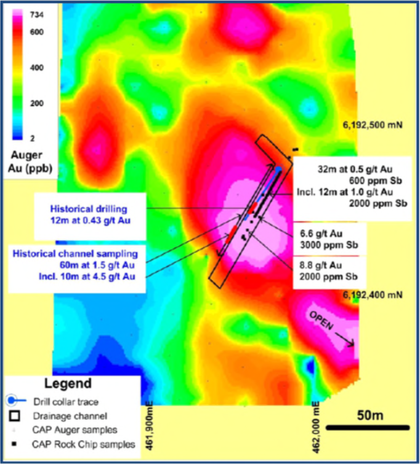 However, Thomson believes the tenement is still very much underexplored and intends to apply its learnings from exploration work on the Harry Smith Gold Project to better understand the opportunity here.

Details of the Transaction

Thomson will acquire 100% legal and beneficial interest in the Barellan tenement and the associated information and agreements from the Vendors.

Completion will be subject to a number of conditions precedent:

The conditions must be satisfied or waived on or before 30 June 2021, or such other date as the parties agree.

Given the successes of the recent results from the follow-up drilling at Harry Smith gold project and the Barellan acquisition agreement, Thomson has submitted an application for a new EL for ELA 6181 (Bolaro).

Management believes that the eastern bounding fault is probably the largest, running up the western margins of four known granite features.