It is worth noting that a revised PFS of Mt Carrington that was conducted last year pointed to the generation of pre-tax cash flows of $126 million over five years, just applying a ‘’gold first’’ production strategy.

Thomson provides arguably the best silver exposure of any microcap on the ASX and its key assets account for a resource of approximately 34 million ounce silver, situated in close proximity to the 23 million ounce Mt Carrington resource.

Given that cash generated from a potential early stage gold operation at Mt Carrington (based on 2020 PFS) would equate to three times Thomson’s enterprise value, it isn’t difficult to appreciate the company’s heavily discounted valuation.

Harking back to the term sheet, should a joint venture be formed the parties would then fund on a pro-rata basis, mine development and further exploration of the very prospective Mt Carrington leases for epithermal gold-silver (+base metals) mineralisation and conceptual large copper-gold targets.

Progression to DFS would add value and visibility

Importantly, the term sheet contemplates Thomson funding the advancement of the Mt Carrington gold and silver project through to Definitive Feasibility Study (DFS), completion and submission of the Environmental Impact Statement (EIS), concurrent with community consultation, achieving government Development Consent (Final Investment Decision – FID) and so placing the project and its partners in a position to then fund, build and commission the project under the Joint Venture Agreement.

The DFS completion would indeed be a value adding development as investors would be able to assess the financial metrics of the project.

Under the Term Sheet, Thomson has 60 days to complete its due diligence process of the Mt Carrington Project in order for the parties to finalise and execute a definitive agreement to replace the Term Sheet.

As indicated below, the Mt Carrington Project, along with the Thomson Resources-owned Webbs, Conrad and Hortons projects host significant silver-gold resources and have compelling precious metal exploration potential being clustered in the New England region of north-eastern NSW. 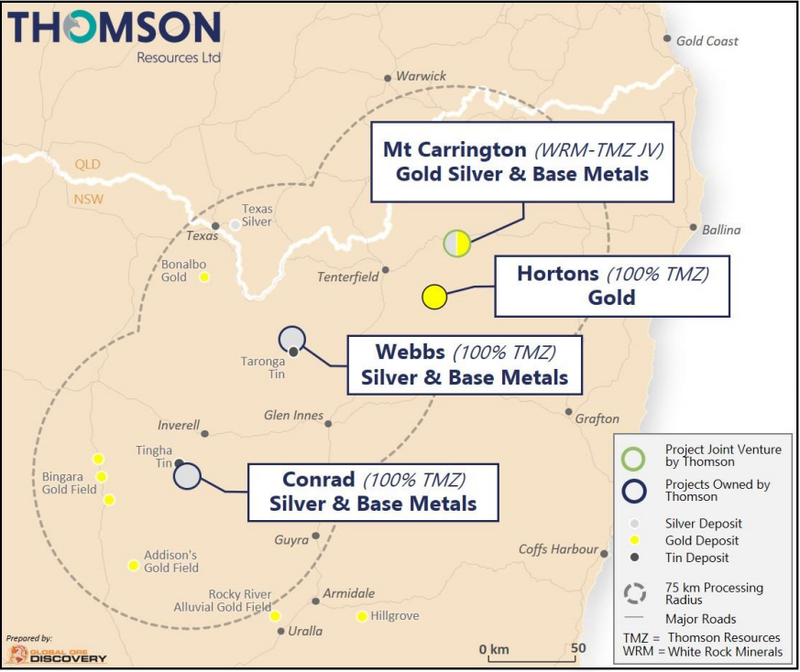 Consolidation of projects to add value

Despite their proximity to one another and attractive commodity mix, these projects have never before been consolidated under one company and so have to date remained undeveloped.

Thomson is aggressively pursuing a consolidation strategy in this region to bring these and other key resources together into an overarching project with a large precious metal (silver-gold), base and technology metal (zinc, lead, copper, tin) resource base that could be potentially developed and centrally processed under Thomson’s new "Hub and Spoke Strategy”.

Thomson intends to continue the consolidation process by adding to the current portfolio of other key resources and exploration opportunities in the northern New England and Southern Granite belt region that could support/fast track development via the company’s “Hub and Spoke” strategy.

On this note, executive chairman David Williams said, “Thomson is building momentum with its ongoing consolidation efforts focused on its new ‘Hub and Spoke’ silver-gold strategy.

"Mt Carrington is a high quality precious metals project that complements the company’s existing quality silver assets at Webbs and Conrad, and it adds value to Thomson’s nearby highly prospective Horton gold project.

"Mt Carrington is well advanced down the Feasibility Study path, and with due diligence completed at both Webbs and Conrad, there is an ability to bring together the different resources in these silver-gold deposits to significantly strengthen the economic viability of all the projects.’’

This rerating was also driven by the purchase of the Webbs and Conrad silver projects which have a combined resource of 34 million ounces based on the most recent studies.

Amalgamate this with Mt Carrington’s latest resource estimate of approximately 23 million ounces and this equates to an in-ground silver resource of 57 million ounces. 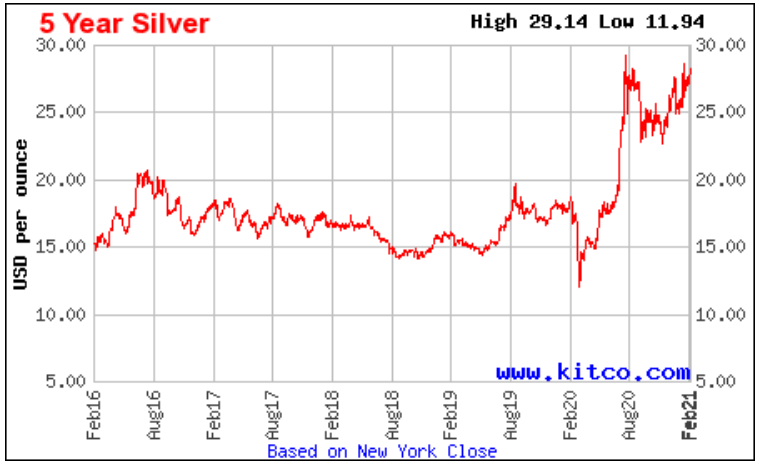 While studies are yet to prove the size and value of what could be deemed as a combined economically viable resource, gaining an appreciation of a big picture scenario is extremely important in the context of management’s consolidation strategy given the potential to economically mine ore that may not have been previously considered as commercially viable, or was yet to be the subject of the necessary feasibility studies.

Particularly given the existing infrastructure at Mt Carrington, establishing a high throughput blended ore operation that would extract optimum value from both low and high grade precious and base metals, as well as benefiting from cost saving by-product credits could potentially be a game changer for Thomson.

Further, Thomson would only have to realise 2% of the value of the in-ground silver resource to account for its enterprise value of just over $40 million, suggesting there may be more share price upside to come.

If Thomson’s market capitalisation of approximately $45 million was brought in line with SVL to reflect a similar resource-based valuation, the group would have a market cap of $87 million, implying a share price of 28 cents, representing upside of 75% relative to yesterday’s close of 16 cents.

Applying the same metrics based on IVR’s market capitalisation would see Thomson with a market cap of $190 million, representing a share price of 61 cents, implying upside of 280%.

Perhaps a realistic valuation lies around the mid-point of these implied market capitalisations (implied share price of 44 cents), but suffice to say it would appear that the value of Thomson’s assets are not captured in its share price, and the company is worth examining for investors targeting the silver sector.

Blending of ores and improved technologies to optimise returns

Management is evaluating whether the consolidated portfolio could provide the optionality to centrally process and blend ores for beneficiation purposes and the critical resource scale to justify the use of processing technologies to maximise recoveries of silver-gold, base and technology metals.

Importantly, these options have not been considered in the past, and given that they are not viewed as value drivers under currently proposed processing pathways for the individual projects, there is the prospect of a significant increase in Thomson’s underlying value if the see-through upside is acknowledged.

Thomson has engaged Brisbane-based metallurgical and process engineering consultants CORE Resources to evaluate the numerous metallurgical studies on these projects and other projects targeted for consolidation.

CORE will also confirm potential compatibility of ores and processing options, including the potential for its world-leading process technologies to optimise processing and recovery of precious, base and technology metals.

It is important to note that there is more to Mount Carrington than its silver-gold resource, and these "extras’’ would be particularly significant if Thomson embarks on its consolidation strategy.

The Mt Carrington Project includes a series of assets that could be beneficial for Thomson’s Hub and Spoke Strategy, including its JORC 2012 gold reserves and JORC 2012 and 2004 gold and silver resources.

The associated onsite infrastructure that includes a 1.5 million tonnes tailings dam, a 750ML freshwater dam, a reverse osmosis water treatment plant, access to the State power grid, previous processing plant foundations and a current environmental assurance bond of $968,000 make for highly valuable inclusions that could potentially be integral to a multi-project development.

As indicated below in the PFS completed by White Rock, the results from the review and updating of the 2017 PFS revealed a significant uplift in project economics, predominantly driven by the upgraded Australian dollar gold price assumption of $2300 per ounce compared with $1700 per ounce (2017 PFS). 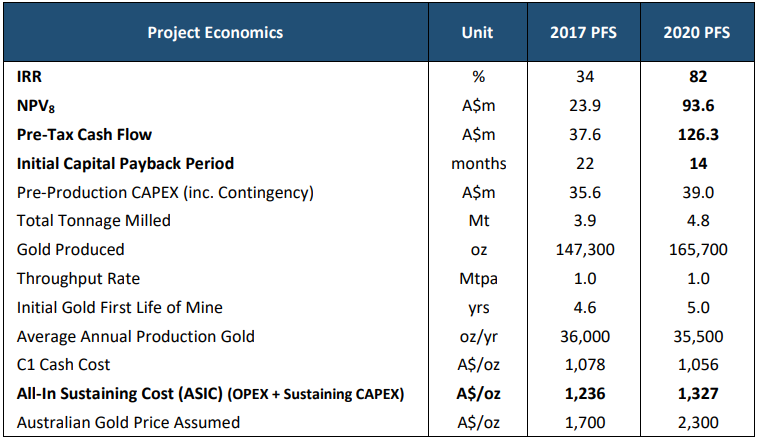 Note that the base case Australian dollar gold price of $2300 per ounce that was applied in the PFS is in line with the current spot price based on existing foreign exchange rates.

Given the group’s intention to consolidate the projects into a potentially larger development, it is worth noting that based on the revised PFS the project is forecast to generate pre-tax cash flow of $126 million during its first five years of operation. 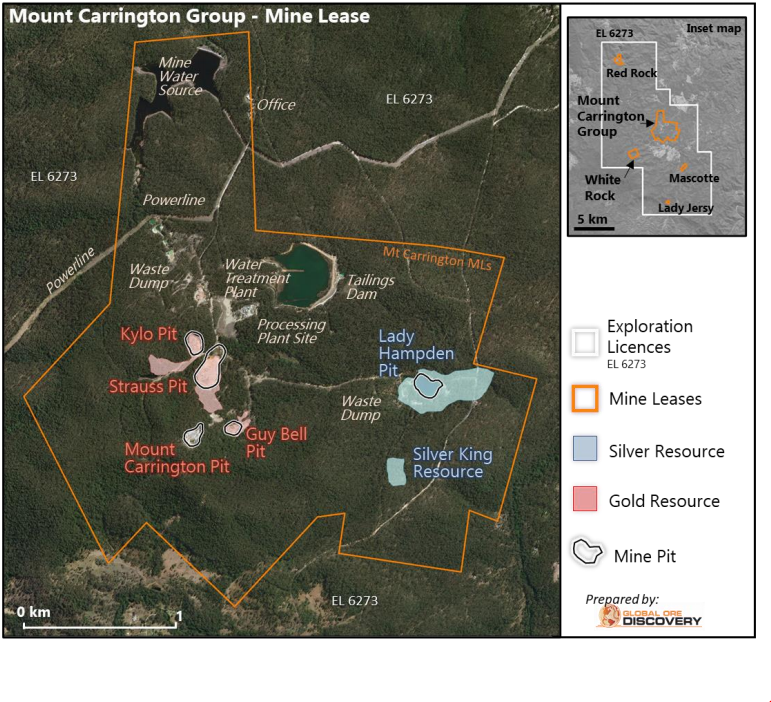 These additional resources offer the potential to extend the mine life with a possible “silver second” stage development at the project.

Thomson considers the Mt Carrington Project to be very prospective for the discovery of additional gold-silver and base metal (zinc-copper-lead) mineralisation.

Since 2010, White Rock has generated and refined an extensive exploration target pipeline for the project prospective for near resource step-out style targets through to district-scale targets, including the conceptual potential for large tonnage intrusion-related (porphyry) copper mineralisation.

Thomson and its geoscience consultants Global Ore Discovery have recently completed a two-day field review of the Mt Carrington Project and have initiated an integrated review of the extensive White Rock resource drilling and high-quality exploration data base as part of the proposed joint venture and due diligence process to identify and prioritise targets for future drill testing.