In another crucial step in executing on its Fold Belt (Queensland border and north-east New South Wales) Hub and Spoke Strategy, Thomson Resources (ASX:TMZ) has entered into an agreement to acquire the Silver Spur Mining Lease ML 5932 that is located within the Texas Silver Project.

The associated binding Terms Sheet is with private company Cubane Partners Pty Ltd, and the lease that is subject to acquisition is 3.5 kilometres south of the Twin Hills silver mine.

The staged cash and equity consideration appears very modest relative to the quality of the asset under acquisition, particularly taking into account its strategic significance.

Thomson recently entered into an agreement to acquire the Texas Silver Project, including the Twin Hills and Mt Gunyan silver and base metal resources and in-ground mining infrastructure, located in the highly prospective Silver Spur Basin of Southern Queensland.

Thomson has consistently built on its position through the Fold Belt Hub and Spoke Strategy, adding highly prospective territory and valuable infrastructure, as well as established resources.

As indicated below, Thomson’s assets comprise the 100% owned Texas, Webbs and Conrad projects and the Thomson – White Rock Resources Mt Carrington JV, has been added to with this acquisition. 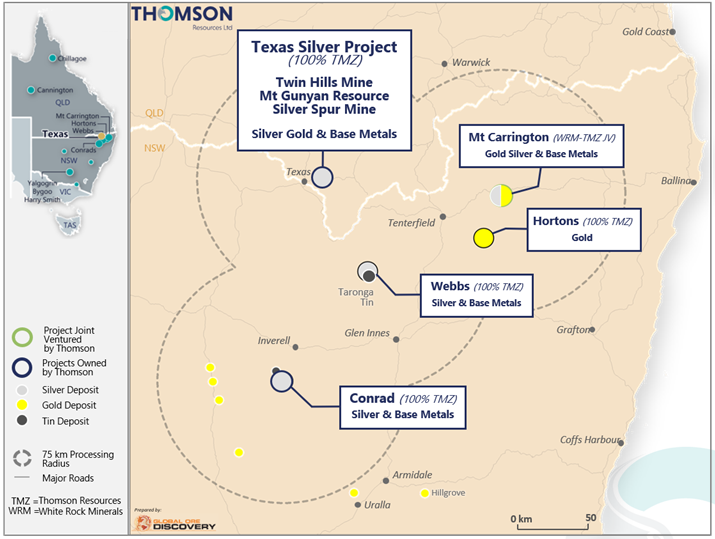 Silver Spur, Twin Hills and Mt Gunyan deposits are the core of the Texas Silver project being acquired by Thomson, but are recognised by the company as part of a larger silver (gold), zinc, lead, copper district hosted within a Permian age sedimentary basin known as the Silver Spur Basin.

Various forms of resource quantification for these projects have been announced by previous owners of the projects, and Thomson is reviewing historical data with a view to restating or defining new resources compliant with JORC 2012.

Underlining where Silver Spur fits into the company’s broader hub and spoke strategy and highlighting the extensive landholding now controlled by Thomson, managing director David Williams said, "This is a key strategic acquisition for the company with the Silver Spur ML representing delivery of an additional silver resource and prospective exploration targets.

"We now feel we have the ‘complete package’, controlling over 518 square kilometres of granted mining and exploration licences and new exploration licence applications covering and surrounding the prospective Texas Silver District, a cornerstone asset in the company’s Fold Belt Hub and Spoke Strategy.

"The Board of Thomson, with the assistance of its close advisors, continue to demonstrate the ability to move quickly and decisively to add value for Thomson’s shareholders.

"I would also like to thank Cubane Partners for the speed and commerciality in which they have acted on the negotiation of this transaction, along with their belief in Thomson’s central processing strategy that will make this transaction a win-win.”

Thomson offers one of the strongest exposures to silver on the ASX, positioning it ideally as the silver price sits less than 10% shy of February’s eight-year high of about US$30 per ounce.

Total produced metal was reported as approximately 2.2 million ounces of silver, along with material quantities of zinc, lead, copper and gold.

In that era, inefficient smelting resulted in a significant proportion of metal being lost.

However, as indicated below Thomson has a quality portfolio in terms of having established resources to mine, expand and explore. 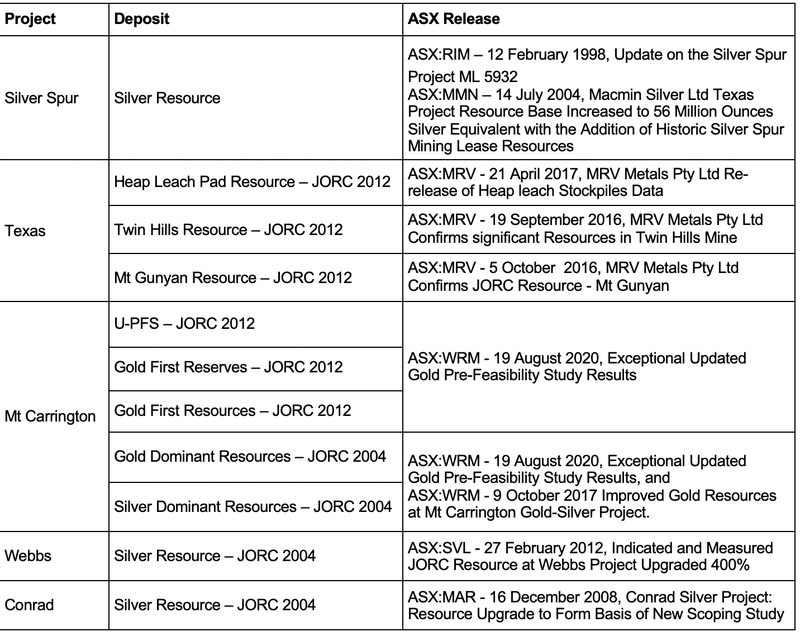 Multiple phases of exploration have been carried out at the Silver Spur Mine, the most recent being undertaken between 2002 and 2012 by Macmin Silver and Alcyone Resources who drilled 5,650 metres of diamond core, RC and percussion drilling in 84 holes.

As well as the Silver Spur mine, this included the nearby Silver Spur North prospect, reporting significant silver and base metal mineralisation starting in the near surface.

Importantly, the Macmin and Alcyone Resources exploration drill results have not been incorporated into an updated resource for Silver Spur, suggesting there could be substantial resource upside to the figures released by Macmin.

Thomson is compiling and validating historic exploration results that include compelling untested electromagnetic (EM) geophysical anomalies adjacent to the Silver Spur Mine that may represent concealed sulphide mineralisation.

Management will use these validated results as a basis for a new JORC sulphide resource for the Silver Spur Mine and to prioritise exploration targets for drill testing.