The final results from drill hole ZDDH00017 have more than tripled the downhole width of the previously reported drill intercept to 86.4 metres at 2.3 g/t gold, with a higher-grade zone returning 50.5 metres at 3.6 g/t gold.

Commenting on these latest results and their significance in terms of the group’s broader exploration program, managing director Zeff Reeves said, “The final assay results for ZDDH00017 further demonstrate the thick, high grade nature of the mineralisation at El Zorro.

‘’This is the fourth hole Tesoro has drilled at El Zorro which has returned a greater than 100g/m intercept which is phenomenal considering the stage the project is at.

‘’We are encouraged by the strong mineralisation well into the footwall sediments, which demonstrates that proximity to the wide controlling structures can provide the right ingredients for gold mineralisation regardless of rock type.

‘’We have used this information to continue to fine tune our exploration model and have identified further extensions that we intend to drill during the year and continue to expand the scale of El Zorro.”

The following table shows the full assay results that have been received for the lower, main mineralised zone.

Just the start of an aggressive drilling campaign

Drilling completed to date including a snapshot of ZDDH00017 (see yellow box to the north) and the location of the site the south-east where drilling is currently taking place is illustrated on the following map. 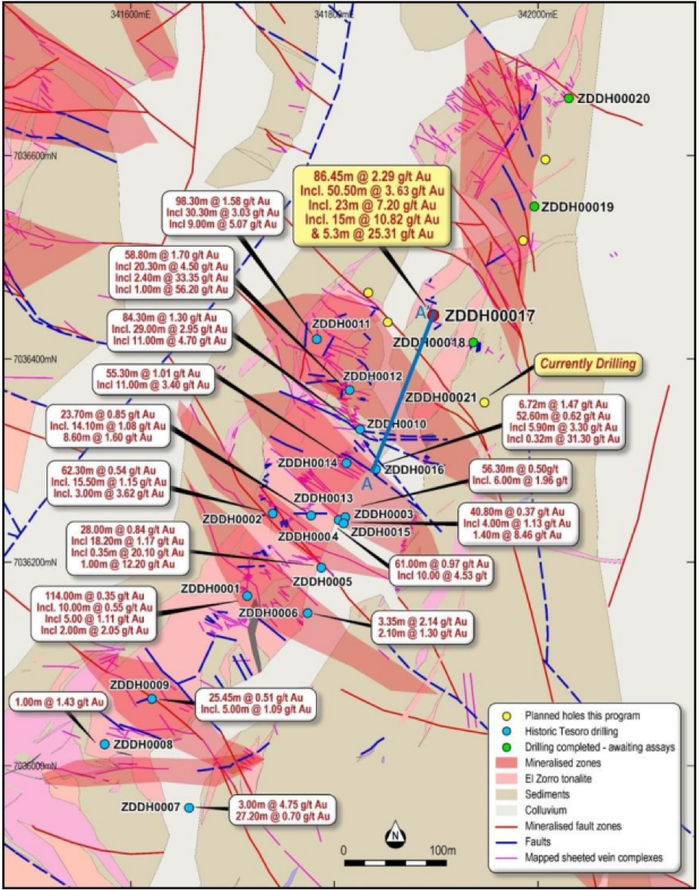 The current drilling program commenced on 7 February 2020, with an initial 10 diamond drill holes planned to extend the Coquetas drilled mineralised zone from 350 metres of strike to over 800 metres of strike and up to 300 metres depth.

Mineralisation at Coquetas has been identified at surface and to date has been drilled to a depth of 300 metres.

From a geological perspective, gold mineralisation is controlled by north west striking fault systems which intersect the main host rock (El Zorro Tonalite – EZT) which forms wide (identified to date up to 250 metres wide) sheeted vein complexes, that have been subsequently mineralised with gold bearing fluids.

Shares in Tesoro have increased three-fold in March on the back of strong exploration results.

Given that the current hole being drilled (ZDDH00021) is designed to intersect the southern extensions of mineralisation encountered in both the upper and lower zones of ZDDH00017, there could be further share price catalysts to come.