Eleven diamond drill holes, for just over 2000 metres, were successfully completed of the total 6,000 metre Phase 1 drilling program on the Elizabeth sector of the project.

As indicated below, the drilling was completed from mid-November to mid-December 2020 with the primary focus being infill and down-dip extension at the southern portion of the South-west (SW) Vein and a single drill-hole testing the extension of the West and Main veins. 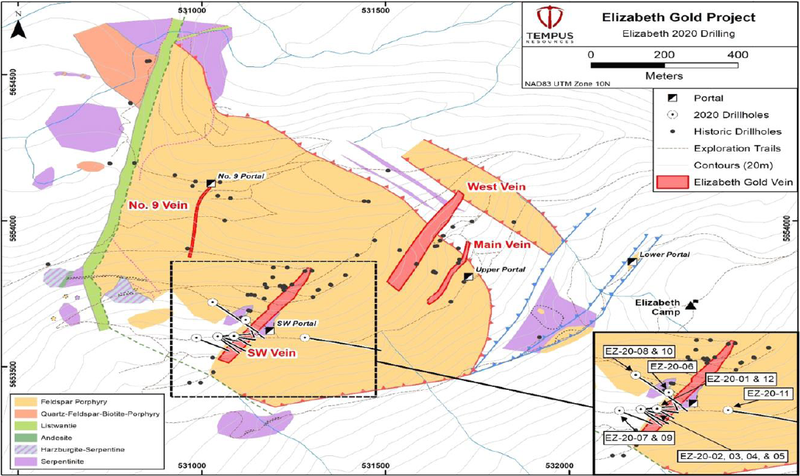 Both intersections contained bonanza style mineralisation of approximately 180 g/t gold in segments up to 1.5 metres.

Bonanza grades were a feature of this region during historical drilling, and Tempus President Jason Bahnsen pointed to this trend in saying, ‘’The Elizabeth Phase 1 high-grade intercepts are consistent with historic values previously reported, including 331 g/t gold over 95 centimetres (E07-43), and visible gold that was identified in drill hole EZ-20-06 as announced in December 2020 which returned values up to 186 g/t gold over 1.5 metres.

In commenting on the most recent results, Bahnsen said, “The Phase 1 drilling results confirm the high-grade potential of Elizabeth.

‘’We look forward to continuing with the drilling program there in the Canadian spring, leading to an updated NI43-101 resource estimate thereafter.”

4000 metres of drilling at Elizabeth Phase 1 followed by MRE

The timing couldn’t be better for Tempus with the gold price receiving strong support above US$1800 per ounce.

There is approximately 4,000 metres of drilling remaining in the Elizabeth Phase 1 drilling program, and Tempus expects to re-commence drilling and complete the remaining drilling in the Canadian spring.

Given this early success, it will be immediately followed by the preparation of an updated NI43-101 Mineral Resource Estimate, and an additional 7,500 metre Phase 2 program focused on delineation of additional resources at the Southwest, Main and West Veins, as well as untested soil geochemistry targets identified in previous years.

Management is very encouraged by the first tranche results as they have increased the confidence level of the geological model that will be utilised for resource estimation work over the coming year.

However, distant drill holes along trend indicate the SW Vein may extend along strike to the north-east an additional 400 metres for total strike of 800 metres. 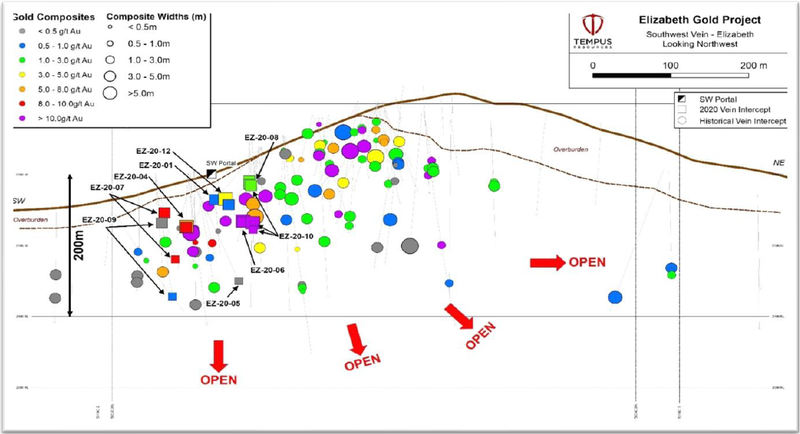 The Main and West Veins were explored by underground drifts in the 1940s and '50s and have only seen minimal exploration since.

The lack of exploration, particularly using modern methods suggests this area is very much an unknown quantity with the prospect of yielding a bonanza discovery.

EZ-20-11 is a significant step out to the south-west (300 metres) of the West and Main vein and was successful in intersecting both veins.

Although width and grade were low, the alteration and associated mineralisation indicate these to be a continuation of the West and Main vein.

Consequently, management believes these veins warrant follow up exploration with a view to confirming continuity of the veins over a greater strike length.