Tempus Resources Ltd (ASX:TMR) is poised to commence drilling at the Elizabeth sector of the Blackdome-Elizabeth Gold Project in south-western British Columbia, Canada.

It was in June that Tempus last flagged the start of a drilling campaign, and that news combined with the completion of a $4 million capital raising triggered a doubling in the company’s share price.

Such was the previously defined high-grade mineralisation surrounding the area being drilled that exploration success could have significantly transformed the company’s merits overnight, prompting investors to take a position before its share price ran.

At that stage the company was targeting extensions to known mineralisation at Elizabeth which is situated close to the prolific Bralorne Gold Camp that historically produced approximately 4.2 million high-grade ounces.

Harking back to the company’s current program, Tempus has now received the Permit of Work for the drilling program from the British Columbia Ministry of Energy, Mines and Petroleum Resources (EMPR), and it has the drill rig on site ready to commence the program in the coming days.

The permit received is a multi-year area-based (MYAB) approval, which authorises exploration activity including drilling for up to 5 years.

The backdrop is similar to the previous campaign in that the Elizabeth sector of the Blackdome-Elizabeth Project hosts an historic NI43-101 Inferred Mineral Resource of 522,843 tonnes grading 12.26 g/t gold, for 206,139 ounces of contained gold.

The drilling program will focus on verification and extension along strike and at depth to the historical NI43-101 Mineral Resources at Elizabeth as shown below. 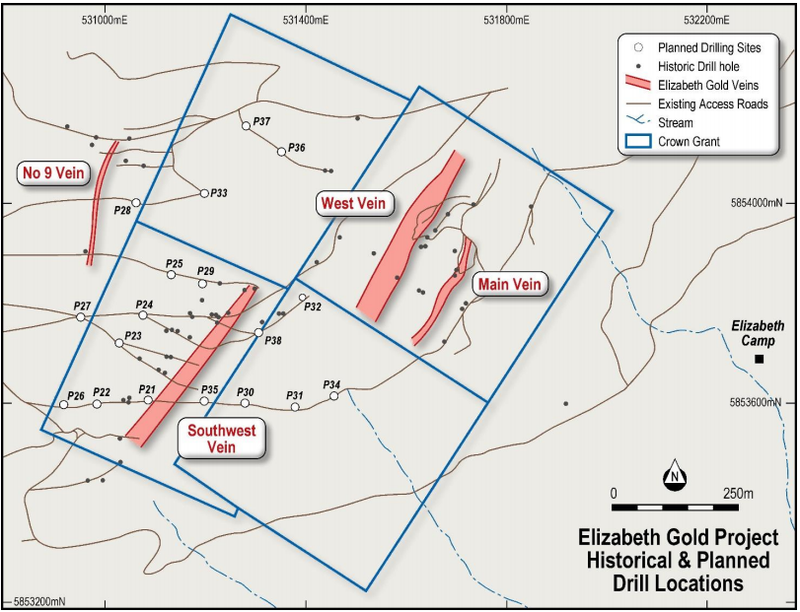 Upon completion, Tempus will prepare updated JORC 2012 and NI43-101 compliant estimates, expected to be published in March, 2021, once all data has been received and modelled.

This will be a significant milestone for Tempus as it will allow peer comparisons to be made with other companies that have an established JORC 2012 resource.

Managing Director, Brendan Borg commented, “We have very much been looking forward to receiving this key approval to allow drilling to commence at Elizabeth, and are appreciative of the support received from the local First Nations communities for exploration to proceed at the project.”

‘’In addition, Tempus is pleased to announce that the resource modelling process for the Blackdome sector of the project has commenced, with receipt of final data and reporting for that part of the project expected in the coming days.’’