Importantly, these results show that previously overlooked zones are poised to significantly contribute to an updated mineral resource being undertaken by the group.

This represents a double dose of good news for TMR as management has informed the market today that it has received conditional approval to list on the Canadian TSX Venture Exchange (TSX-V).

The latter will significantly increase the group’s access to capital markets, particularly in North America.

Given Tempus has made good ground in terms of progressing its Blackdome-Elizabeth Project in British Columbia by drilling extensions to existing mineralisation and other high-priority targets, funding is likely to increasingly come into the group’s planning strategy.

On this note, managing director Brendan Borg said, “Blackdome drilling has been successful in verifying past work at the project.

‘’The historically dismissed broad and continuous mineralised haloes provide further evidence of the size of the system and we are excited about the potential impact these may have on the pending Mineral Resource update, given current gold and silver prices, and the infrastructure and permitting advantage Blackdome benefits from.”

Indeed, the price environment remains extremely robust despite a slight retracement in the gold price over the last three months, including a decline of 1.5% last night.

However, to put this in perspective, the precious metal has traded in a range between US$1460 per ounce and an all-time intraday record high of US$2090 per ounce over the last 12 months.

A mix of broader intersections and robust grades

A total of 26 holes (5,087 metres) were completed at various targets at Blackdome, including the Giant Vein, No.17 Vein, No.19 Vein, Redbird Vein, New Vein and the No.3 Vein (formerly the No.1/No.2 Vein) as indicated below. 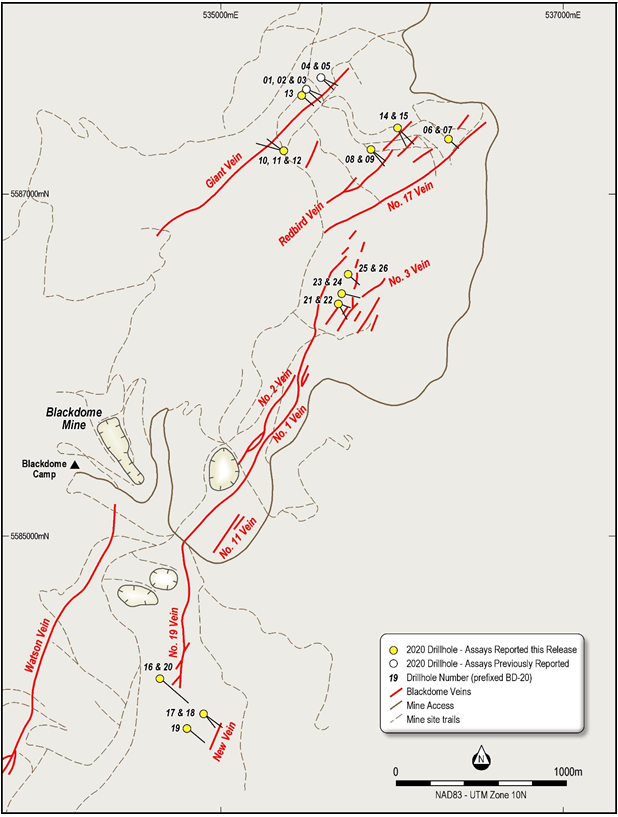 The substantial silver mineralisation is also important as the silver price is hovering in the vicinity of US$24 per ounce, up by about 40% from US$17 per ounce 12 months ago.

One of the more prominent drill holes in terms of silver mineralisation featured 113 metres at 0.5 g/t gold from 49 metres including 2 metres at 2.2 g/t gold and 108 g/t silver from 83 metres.

Credits from silver production can substantially drive down costs of production, resulting in both increased rates of return and the potential to include lower grade ore that would otherwise be uneconomical.

The results in the No. 3 Vein are very encouraging as they confirm high grades and continuity in the No. 3 Vein/structure. With respect to the No. 1 and No. 2 veins at Blackdome where over 90% of historical production occurred, the 2020 drilling by Tempus in the No. 3 zone are above the historic production levels of 1,870 to 2,000 metres elevation.

The No. 3 vein is essentially an extension of the No. 1 vein which was only explored at shallow levels. Hydrothermal vein textures identified in the 2020 drill core further indicate an upper level of mineralisation within an epithermal gold deposit and there still remains significant untested depth extension potential.

The Giant Vein, Redbird Vein and the No. 17 Veins are separate vein sets from the main 1 and 2 vein structure and appear to have a different range of gold mineralisation with respect to elevation.

As in the No. 3 Vein zone, hydrothermal vein textures in the Giant, Redbird and No. 17 Veins also suggest a high level of mineralisation within an epithermal deposit.

This is likely a factor in grade variability as the veins are typically more ‘nuggety’ at these levels. This is evident in a twin hole drilled in 2006 by Sona Resources where a vein intersected at an elevation of 2100 metres, B06-03A intersected 1.9 metres at 14.2 g/t gold and B06-03 intersected 2 metres at 0.8 g/t gold. These holes are collared 2 metres apart.

To further understand the variance in grade, Tempus selected 78 samples from 2020 drilling to be re-analysed for gold.

However, the overall grades did not have a significant effect on the weighted average intervals.

Further to this, 43 samples were taken from historical drill core, either halved core that previously wasn’t sampled or quartered core to duplicate historical samples.

A total of 15 duplicate core samples were assayed from six historic holes.

Mineral Resource Estimate at Blackdome to include bulk sampling

The modelling process to prepare an independent Mineral Resource Estimate (MRE) for Blackdome has commenced, which will provide an updated estimate compliant with the applicable Australian and Canadian standards for reporting of Mineral Resources.

It is expected that updated MRE for the overall Blackdome-Elizabeth Project will be completed after the Elizabeth drilling program currently underway is completed, and all assays have been returned.

This will be an important milestone for Tempus Resources as it will provide investors with the scope to undertake meaningful and accurate peer comparisons, as well as attributing valuations to the ore in ground-based on the levels of confidence categories that point to commercial viability.

Previously, miners at Blackdome relied on extensive drilling to delineate the presence and extent of gold mineralised structures, but due to the nugget effect, grade determination could often be unreliable.

This lack of understanding led to a consistent underestimation of the grade that was ultimately processed through the mill and difficulty in gold recovery reconciliation.

Based on this historical evidence, supplemented by the 2020 work completed by Tempus, exploration activities at Blackdome in 2021 will include a significant component of bulk sampling from underground workings, once access to these areas has been re-established.

Larger bulk samples help to overcome the natural variability in the grade of nuggetty gold style mineralisation systems, providing a more accurate determination of contained gold, and assisting in mine planning.