This is the group’s flagship project, having been the source of high-grade gold production in the past.

The group is currently midway through a drill program at Blackdome-Elizabeth that will form the basis of an updated NI43-101/JORC resource estimate.

The 2021 drilling campaign began on 5 June 2021, and diamond drill holes have been completed to date for a total of 774 metres.

Drillhole EZ-21-04 that was drilled on the northern extension zone of the South-West Vein has intersected a wide zone of quartz veining (approximately 4.2 metres), from 121.8 to this 126.0 m, with visible gold evident over approximately one metre.

The grouping of the aforementioned drill holes can be seen below. 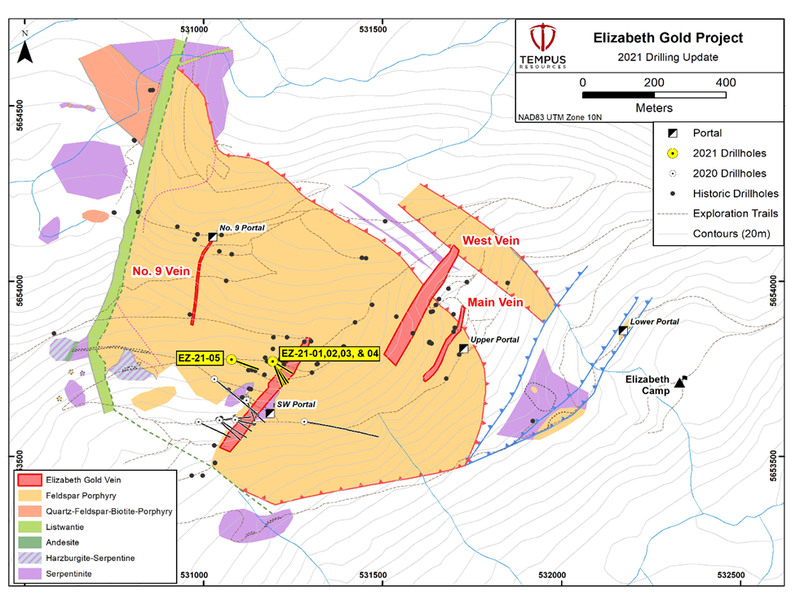 President and chief executive Jason Bahnsen expressed his confidence in the group’s ability to identify more high-grade mineralisation in saying, "The 2021 drill campaign is off to a great start with this the presence of visible gold in the first few holes.

"We are looking forward to more high-grade results as we continue to demonstrate the extensions to the known vein systems at Elizabeth.”

The South-West Vein has been identified in drilling along a total strike of 800 metres and to a depth of 200 metres below surface.

Results for drilling undertaken during the last campaign are shown below, highlighting the apparent extensions to known mineralisation. 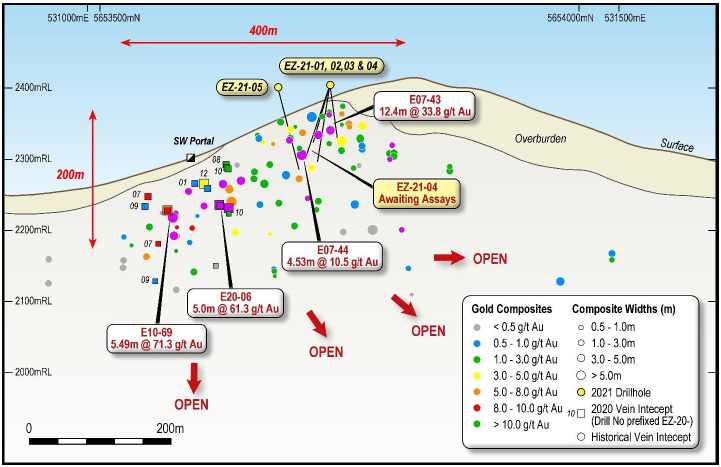 The initial five holes of the 2021 drilling campaign are focused on confirming and expanding an interpreted high-grade shoot (referred to as the North Extension Shoot) in the centre of the currently defined structure.

All five holes have intersected the vein that typically varies in width between one metre and 4.2 metres, and it is associated with strong sericitic alteration of the dioritic wall rocks.

From a geological perspective, multiple phases of brecciation and quartz precipitation are evident, with visible gold typically associated with fine limonitic partings and blebs, or with dark irregular bands of sooty sulphide composed of pyrite, arsenopyrite, galena and chlorite.

The high-grade quartz veins encountered in the 2020 (and visually in 2021) drilling at Elizabeth show close geological similarities to the Bralorne mesothermal vein system which has been mined to a depth of approximately 2,000 metres from surface.

This suggests there is strong potential to extend the mineralisation down plunge from the current deepest intersections that are approximately 200 metres below surface.

Tempus is in the process of logging and sampling the core in preparation for analysis, and assay results will be keenly awaited given observations to date, particularly in terms of identifying visible gold.

Weather conditions impact mining activity in British Columbia, and it would appear that a hiatus in news flow during the northern hemisphere winter has seen the company slip off the radar.

However, with assay results coming on the back of the identification of visible gold it wouldn’t be surprising to see a resurgence in the group’s share price.