The project has up to 30 kilometres of prospective strike extent and consists of three Exploration Licences covering a combined area of 199 square kilometres and upcoming soil sampling will be followed by reverse circulation drilling.

The area under exploration is ideally located in between the Lawler’s and Mount Ida mining districts.

The current soil geochemistry program will consist of approximately 1,100 samples taken along east-west sample lines stepping out to the north and south of the central area where previous soil and rock chip sampling identified gold anomalism.

Peak results from the project to date are 884 ppb gold in soils and 6.6 g/t gold in rock chips.

The recently completed RC drilling program was undertaken as a first test of this area of soil and rock chip gold anomalism.

As indicated below, less than 10% of this newly identified greenstone belt has been tested by soil geochemistry so far. 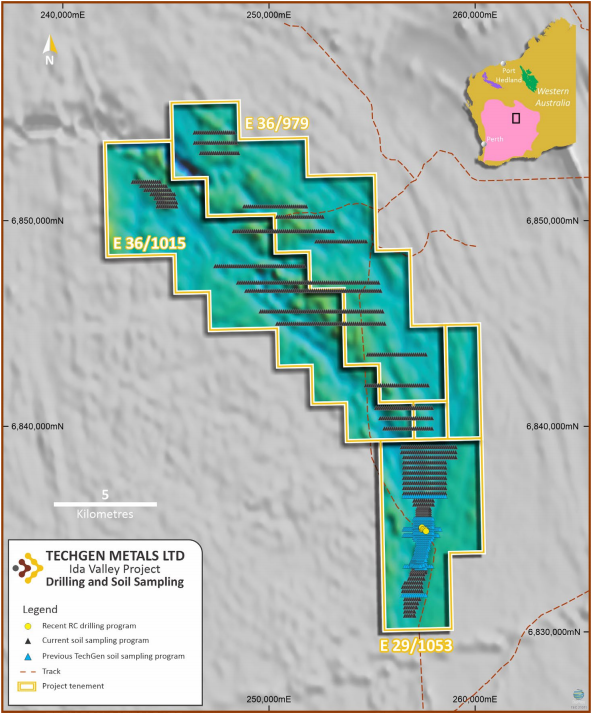 Results from the RC drilling program that were completed in May 2021 (see yellow dots to the south of E 29/1053) should be to hand shortly.

Soil geochemical samples will be assayed for gold and a range of pathfinder elements that are associated with the current known gold mineralisation within the project.

Underlining TechGen’s confidence in the area, as well as its exploration strategy, managing director and Ida Valley Project vendor Ashley Hood said, “The project has continued to deliver encouraging geology at surface and backed up within the recently completed inaugural RC drilling campaign.

"Given this encouragement we have taken the earliest opportunity to step out our soil geochemistry sampling coverage both to the north and south of the previous identified anomalies whilst we await RC drilling assay results.

"The soil geochemistry program will cover strike extensions of the Ballard Fault and other interpreted shear zones as well as test localised airborne magnetic targets.

"The company anticipates that the soil sampling program will take two weeks to complete with assay results to follow."