From a broader perspective, multiple mineralised zones were intersected, while multiple geochemical targets are still to be tested.

Composite four-metre samples were collected throughout each drill hole with a total of 249 samples assayed for gold.

Having analysed this recent data, management intends to follow-up with reverse circulation and diamond drilling.

Examining the geological characteristics, the Ida Valley Gold Project covers a northerly to north-westerly trending greenstone belt truncated in the east by a faulted contact with a gneiss/migmatite complex.

To the west lies the Ballard Fault which wraps around a large granite batholith.

As illustrated below, the project consists of three Exploration Licences covering a combined area of 199 square kilometres. 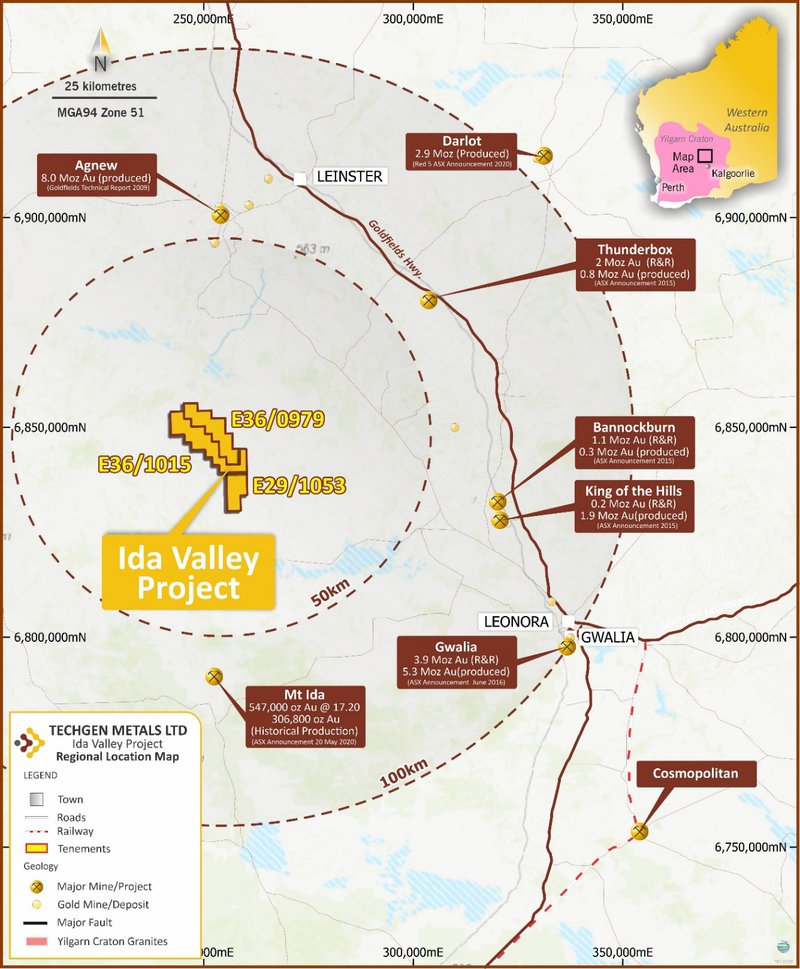 Management confirmed the presence of a new gold mineralised greenstone belt with four of the eleven drill holes returning assay results of greater than 1 g/t gold.

Other promising results include 8 metres at 1.25 g/t gold from 20 metres in hole (IVRC001) which is up-dip of the mineralisation intersected in hole IVRC002.

Hole IVRC011 intersected 4 metres at 1.63 g/t gold from 52 metres, the only hole to test an interpreted western shear zone.

Gold mineralisation is associated with quartz veining, arsenopyrite and pyrite within amphibolite and ultramafic rock units.

Gold mineralisation open at depth and along strike

The gold mineralisation intersected in drilling remains open at depth and along strike, and a long soil gold anomaly of more than one kilometre in length that is located south of the current drilling remains to be drill tested.

The soil sampling program announced at the start of June to step out to both the north and south of previous areas of sampling has now been completed and 1,131 soil samples, along with 20 rock chip samples have been submitted for assay, potentially identifying further targets.

TechGen’s managing director Ashley Hood was impressed with the exploration results, and he highlighted their significance in terms of opening up new growth opportunities in saying, “We are pleased to have discovered a new gold mineralised greenstone belt in between two highly mineralised regions in the heart of Western Australia’s goldfields.

‘’From a blank canvas of outcropping greenstone some 18 months ago with no historic gold or base metals exploration, to this brand new and first-ever RC drilling campaign confirming impressive gold grades over multiple zones, today’s results open up exciting new growth opportunities and have delivered new target horizons as the company’s technical team continues its approach of simultaneously exploring and evaluating its project pipeline.”