The VTEMTM Max survey at the Mt Boggola Project will consist of approximately 320 line kilometres of surveying with nominal 200-metre spacings between flight lines.

The airborne survey will cover the northern granted project area (E08/2996) as shown below. 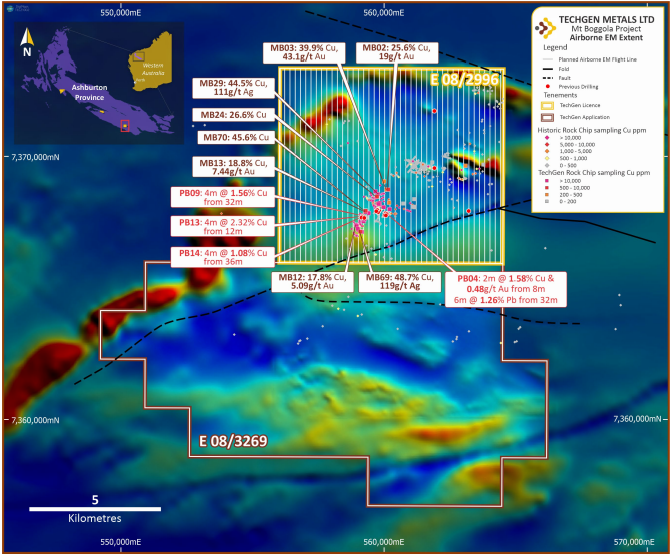 In tech-talk, when you combine this with a high dipole moment transmitter, the result is unparalleled resolution and depth of investigation in precision electromagnetic measurements.

However, setting aside the upcoming surveying, TechGen has had boots on the ground, and historic drilling, rock chip and soil sampling and exploration completed by the group has identified areas of high-grade copper-silver-gold, as well as outcropping copper mineralisation (malachite) within the project area.

Several areas of anomalism are known and the VTEM-Max survey is being undertaken to identify possible sulphide mineralisation at depth across the project area.

XRD analysis has been undertaken on a single rock chip sample which assayed 48.7% copper and 119 g/t silver.

The results of the XRD analysis have indicated that in addition to the presence of copper oxide minerals, the copper sulphide mineral djurleite is also present within the sample.

To provide context, most copper ore bodies are mined from minerals created by weathering of the primary copper ore mineral chalcopyrite.

Minerals in the enriched zone include chalcocite, bornite, djurleite - by contrast, minerals in the oxidized zones include malachite which as we mentioned was identified in outcropping copper mineralisation.

Consequently, TechGen has already identified two key markers in its quest for unveiling a copper resource that could also contain traces of precious metals.

The VTEM survey is anticipated to take 4 to 5 days to complete.

The same type of airborne survey being conducted at Mt Boggola was just completed last week at the company's Station Creek Project, and these results will emerge prior to those from Mt Boggola, indicating there are potentially multiple catalysts on the horizon.