Tando paves the way for SPD funding and construction

Tando Resources (ASX:TNO) has received firm commitments from UK and domestic investors for $1.7 million via a share placement at 8.5 cents, representing a 15% discount to the last sale price.

The proceeds will be used to advance offtake agreements for Phase 1 of Tando’s SPD Vanadium Project in South Africa.

In keeping with the usual reaction to discounted capital raisings, the placement price resulted in a retracement in the company’s share price.

However, the fact that the company has traded at levels above the placement price is a positive indication in terms of market acceptance.

Tando will also raise up to $300,000 via a Share Purchase Plan on the same terms as the Placement.

Importantly, offtake agreements will underpin project level funding for Phase 1, which has an estimated capital cost of just US$18 million and very high annual operating margins of US$17 million together with a short payback period of less than two years.

Swiftly moving to this stage will enable the company to quickly and economically upgrade the recently completed scoping study to a prefeasibility study (PFS).

As a backdrop, the scoping study confirmed the potential for Phase 1 to be an early, low-cost starter operation generating strong average margins of US$17 million per annum with a short payback period of less than 2 years due to the high grade nature of the mineralisation and the low capital expenditure requirement of $18 million.

Phase 1 is based on a proposed 2.2 million tonnes per annum standalone mining and beneficiation operation to generate a +2% vanadium concentrate for sale at mine gate. 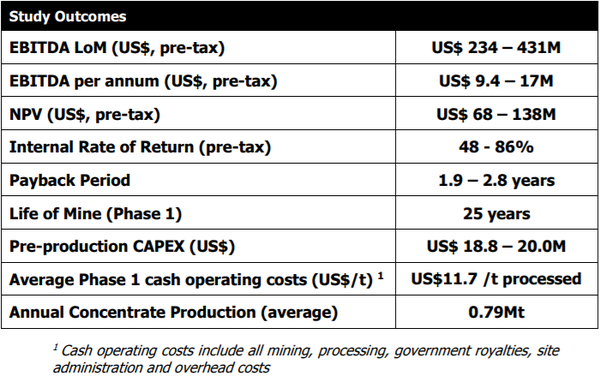 The details are indicated above, but it is important to note that as impressive as these figures are, they only account for a base case scenario, and it is worth viewing the next graphic to gain an appreciation of the potential upside from variations in a wide range of metrics, but particularly the vanadium price as it is expected to be supported by the surge in production of electric vehicle batteries.

Phase 1 is forecast to enjoy low capital and operating costs due to the high grade nature of the vanadium mineralisation at SPD.

The Mineral Resource for the high grade surface component of the SPD deposit stands at 169 million tonnes at 1.07% vanadium (Indicated and Inferred categories).

Discussing the significance of the raising in terms of near and medium-term goals, managing director Bill Oliver said, “This raising will enable us to put in place the final pieces of the jigsaw needed to secure project funding.

“This includes the offtake contracts, which will underpin project funding, and completion of the few pieces of additional work which will upgrade the scoping study to a PFS.

“Given that Phase 1 at SPD has a capital cost of just US18 million, we will be very well placed to secure project level funding and start construction.”

Tando has also informed the market that negotiations with the South African joint venture partners and the original vendors of the SPD Vanadium Project have resulted in a restructure of ownership arrangements and board composition.

These include the acceleration of the maximum ownership permitted to the company of the SPD Vanadium Project to 73.94%.

There has also been a waiver of share milestones with management viewing the revised arrangement as much more accommodative in terms of providing certainty surrounding developing the asset both in relation to offtake discussions and corporate finance.

The issue of shares and options under the restructure will be the subject of shareholder approval in a meeting to be held prior to July 31, 2019.

In the event that shareholder approval is not obtained then all agreements related to the SPD Vanadium Project shall be terminated with the company retaining a 15% interest but not earning any further interest in the project.

To acquire more than 49.9% of the SPD Vanadium Project the company must obtain approval under S11 of the South African Mineral and Petroleum Resources Development Act 2002.