SVM closer to PFS with completion of infill drilling at Malingunde

Sovereign Metals Limited (ASX:SVM) informed the market this morning that the aircore drilling campaign at its Malingunde saprolite-hosted graphite project in Malawi has now concluded.

The drilling campaign, designed to rapidly advance the low-cost project towards a Pre-Feasibility Study, covered 5000 meters in total. An aircore rig used in the drilling has now been moved to test additional saprolite-hosted graphite targets within relative proximity to the project site.

The map below shows the location of additional targets in relation to the Malingunde project: 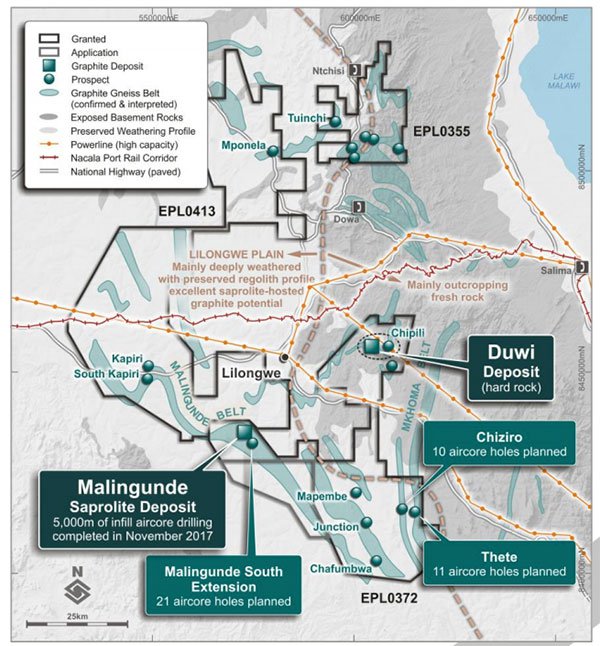 Drilling is now underway at targets Malingunde South Extension, approximately 2km along strike to the SE of the main Malingunde deposits, and the Thete and Chiziro Prospects, both located approximately 40km to the east-south-east of Malingunde.

A recent Scoping Study undertaken by SVM outlined a total production target of 8.0Mt @ 10.0% TGC over an initial 17-year mine life. The Malingunde project is the world’s largest reported saprolite-hosted graphite deposit with a total resource estimate of 28.8Mt @ 7.1% TGC (80% Indicated, 20% Inferred).

However it should be noted that SVM is an early stage play and investors should seek professional financial advice if considering this stock for their portfolio.

The below images show the aircore drill rig in operation at the project, and the drill samples used for logging.

Along with testing a number of nearby prospects, SVM’s key outcome for the resource drilling program was to further define and upgrade the resource estimate for use in the upcoming Pre-feasibility Study mine plan.

The company expects to release infill and regional drilling assay results in Q1 2018. The company also has a further rig drilling a hydrogeological borehole which will provide essential data for defining various requirements for the PFS design and mine plan.