In the lead up to its upcoming maiden drilling campaign, ScandiVanadium Limited (ASX: SVD) has commenced a high-resolution helicopter electro-magnetic (HEM) survey over the company’s 100% owned Pascalle Gold Project.

The Pascalle Gold Project is located in the heart of the Paterson Province in Western Australia, one of the most sought-after exploration districts in the state.

In this first phase, the high-resolution geophysical surveying will provide detailed geological information and allow three-dimensional modelling of targeted anomalies. This leads into the design of a maiden drill program which is expected to commence in the coming months.

Anticipated to take six to seven days, the high-resolution geophysical survey will be conducted with the NRG flying XciteTM HEM system at 100m line spacing.

The system provides uninterrupted ‘soundings’ from near surface to >300m depth of investigation, sufficient to see through Permian cover and reveal conductivity anomalies in the basement rock beneath.

The shallow depth to basement for the Pascalle Project enhances the effectiveness of the survey. 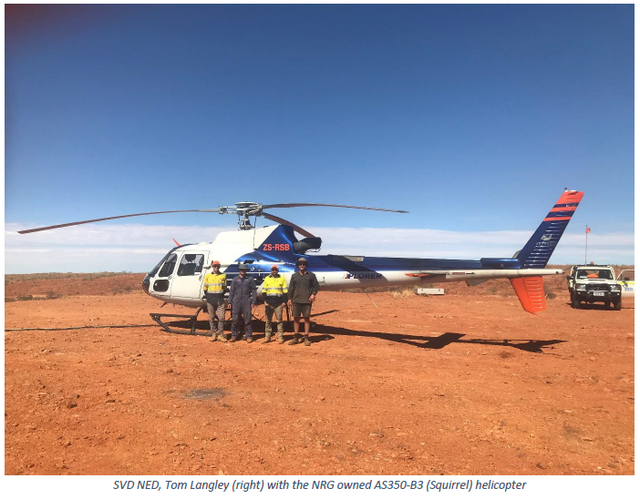 HEM systems have previously been successful in identifying mineralisation in Paterson Province, including at Rio Tinto’s (ASX:RIO) Winu deposit.

The company’s Executive Chairman, David Frances, explained that “the system selected is the same as was involved in the discovery of Winu beneath similar depths of cover and will be vital in the planning of our maiden drilling campaign in H2 2020”.

Winu is a high tonnage copper discovery made by Rio Tinto (ASX:RIO) in the Paterson Province in 2017, where Rio recently a released maiden Inferred Mineral Resource. Rio has also revealed the discovery of a new zone of gold dominant mineralisation approximately two kilometres east of the Winu deposit.

The Pascalle Project sits between Newcrest’s 32Moz Telfer Mine and processing plant, 20 kilometres to the west, and Greatland’s Havieron discovery, located 14 kilometres east. 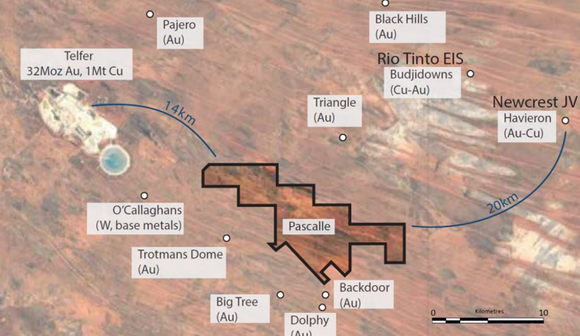 Here you can see a recent Airborne ElectroMagnetic survey at Greatland Gold’s nearby landholding:

While still in possession of its European vanadium assets, the company is now squarely focused on exploration at its newly acquired WA projects — the Pascalle Gold Project in the Paterson Province, plus the Gnama Nickel Project in the Fraser Range.