A total of seven anomalies were identified through the DGPR survey at Sugarloaf.

With the previously announced high-grade chip result, reporting 5.19 g/t gold and 1.73% copper derived within the longer DGPR polygon, the management considers the DGPR survey has solidified Sugarloaf as a drill-ready target.

On this note, Krakatoa’s executive chairman Colin Locke said, “We are delighted with the DGPR results that have put the icing on the cake at Sugarloaf by reinforcing its drill readiness.

‘’The interpreted sub-surface anomalies appear directly under an appreciable magnetic low where surface rocks of high grade have already been reported.

‘’We look forward to sharing the DGPR survey results for Bell Valley with investors as soon as possible.”

Management conducted a survey across selected areas at Belgravia to map the sub-surface geology and provide evidence of favourable hosting environments for mineralisation.

The DGPR survey at the Sugarloaf Target Area was completed across a distinctive magnetic low feature considered as characteristic of a porphyry-style deposit as indicated below. 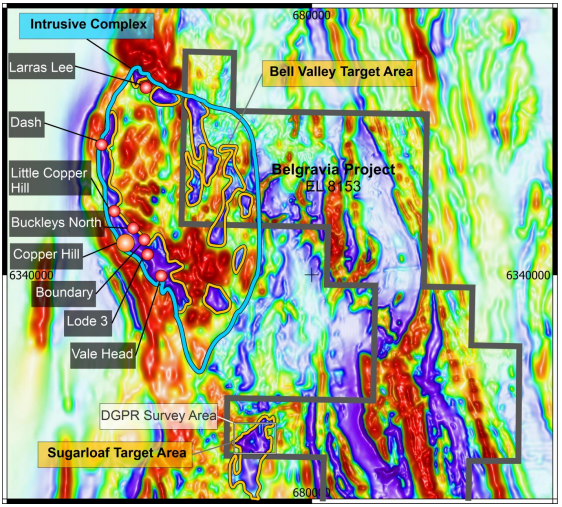 Identification of the magnetic low followed a reinterpretation of regional aeromagnetic data which was confirmed and refined through a later detailed airborne geophysical survey.

Management noted the critical relationship between the location of mineralisation and the expression of magnetic low features (outlined in orange) with the Copper Hill deposit (890,000 ounces gold and 310,000 tonnes copper) and several additional prospects lying within a discrete magnetic low.

Summing up, management considers the economic potential for copper-gold mineralisation associated with a porphyry may lie at depths of more than 200 metres, best exemplified in the expression of the magnetic response.

There is also a view that a shallower initial target lies in the high-grade copper-gold veins that may extend towards the surface from a deeper porphyry source, best exemplified in the DGPR, observed mineral alteration and existing geochemistry.

Based on these hypotheses, Sugarloaf is believed to present the geological characteristics, geochemical signature and geophysical expression of a porphyry copper-gold deposit.

It is also worth noting that DGPR results across the Bell Valley target area are imminent.