On Wednesday, shares in Kairos Minerals (ASX:KAI) spiked 35% from the previous day’s close of 1.4 cents to close at 1.9 cents prompting a speeding ticket from the ASX on Thursday.

Of course is should be noted that share trading patterns should not be used as the basis for an investment as they may or may not be replicated. Those considering this stock should seek independent financial advice.

Responding to the usual questions, KAI confirmed that it wasn’t aware of any information concerning it that had not been announced to the market which, if known by some, could explain the recent trading in its securities.

It’s not for KAI to speculate on what is happening outside the company, but there is a fair chance that developments at Breaker Resources (ASX: BRB) contributed to the share price surge which occurred under near-record daily trading volumes of more than 13 million.

Fleshing out the possible school of thought behind the rush for KAI, the company’s Roe Hills project is located along strike and immediately to the south of BRB’s emerging Lake Roe gold discovery.

Just prior to the market opening on Wednesday BRB entered into a trading halt, announcing that a capital raising was imminent. The word on the street was that the company had managed to raise circa $10 million at close to par (last closing price 74 cents).

While this hasn’t been confirmed, it was reported by the Australian Financial Review on Thursday morning that BRB had raised $10 million at an issue price of 70 cents per share.

The AFR reported that a mainstream broking house in Paterson Securities assisted in the raising. Putting this in perspective, you have a company with a market capitalisation of less than $100 million raising a sizeable sum at an issue price equating to only 5% discount to its last traded price.

Such a development should provide shareholders in BRB (and KAI) with a significant degree of confidence. Normally small miners have difficulty in raising large amounts of capital, in this case more than 10% of its market capitalisation.

Furthermore, it was done with the support of a major broker and executed at a minimal discount to the company’s last traded price.

Kairos a bordering neighbour rather than an oblique nearology play

This arguably implies confidence in both the company and the project, which in turn translates into a positive view from the investment community regarding the prospectivity of BRB’s territory.

Consequently, if streetwise investors have joined the dots that could well account for the interest in KAI which as the following map demonstrates is not just an abstract nearology play, it is sitting right in Breaker’s backyard, as well as being adjacent to other major projects/deposits, including those being developed by Silver Lake Resources (ASX: SLR). 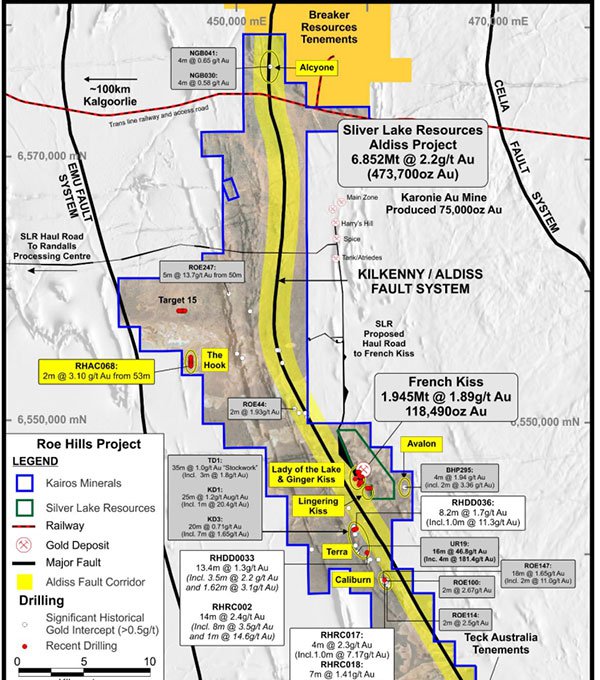 Kairos flying under the radar

It could also be argued that Kairos was, and still is, trading at a significant discount to fair value. Unfortunately, the last round of promising drilling results which featured hits of up to 5.26 grams per tonne gold at the Lady of the Lake deposit and 29.16% at the Lingering Kiss deposit were released at the same time as the gold price retraced after a strong run in July.

Furthermore, it coincided with a rally in base metals which to some extent saw some gold investors take money off the table and redistribute it into copper and nickel stocks. However, with the gold price recommencing its rally in the last week, perhaps KAI will come under the spotlight.

Certainly, if the reports regarding Breaker Resources’ capital raising are confirmed there could well be further share price support for KAI.