Superior Resources on track to upgrade resource at Steam Engine

Superior Resources Limited (ASX:SPQ) has reported promising results from a reconnaissance field visit that followed up historic reports of gold mineralisation along an alteration zone located 1.2 kilometres east of the Eastern Ridge lode.

The company recently followed up historic reports of gold mineralisation within an alteration zone adjacent to the known Steam Engine gold lodes on the basis that the feature may represent a new third lode zone for the Steam Engine Gold Deposit.

The Steam Engine Gold Deposit is an extensive mesothermal gold lode system on which an Indicated and Inferred Mineral Resource Estimate of 1.27 million tonnes at 2.3 g/t for 94,000 ounces of gold has been established.

The Resource has been modelled on only 30% of at least 2.5 kilometres of strike length of outcropping lode and only modelled to relatively shallow depths.

As illustrated below, the alteration zone referred to as the Dinner Creek Lode crops out at surface over a continuous distance of at least 1.2 kilometres and is parallel to the Steam Engine and Eastern Creek lodes. 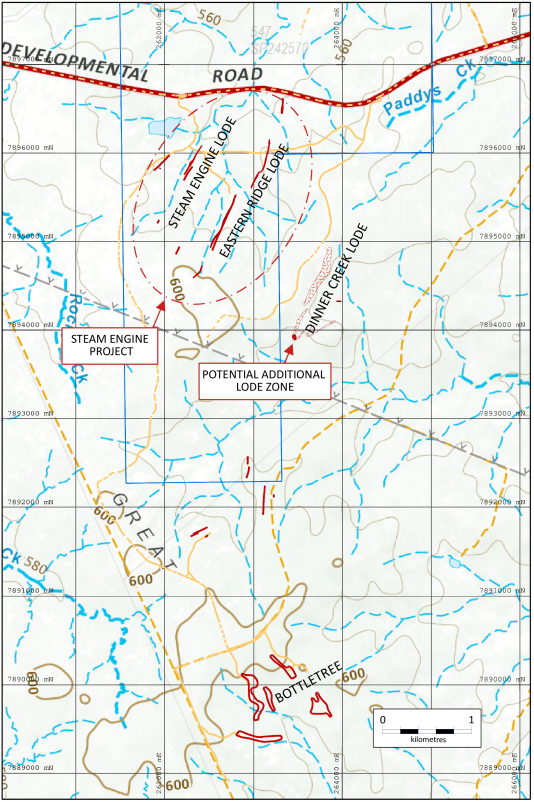 Similar altered rocks are exposed within a creek several hundred metres along strike further to the north, away from the outcrop area.

These samples were taken 500 metres to the north-east and within the same alteration zone.

Superior Resources’ managing director Peter Hwang underlined the significance of the results in terms of growing the resource and potentially making a new discovery in saying, “The new Dinner Creek Lode is an exciting development for the Steam Engine Project and confirms the project’s exceptional growth potential, both laterally at surface and at depth.

‘’This new zone hasn’t seen any exploration work for at least 25 years, which can also be said for much of the area adjacent to the known lodes.”

“The Steam Engine Gold Project currently consists of two main lode zones that have good continuity and are open along strike and at depth.

‘’The upgraded Mineral Resource Estimate is based on only 30 percent of the historically mapped lode strike length.

Success at Dinner Creek would be a game changer

If the Dinner Creek Lode shows the same consistency, it would result in a substantial upgrade to the Mineral Resource Estimate and significantly expand the scope of a potential mining operation.”

The current resource drilling program is well-advanced and Hwang expects assay results from the initial batch of samples to be received this week.

Management has also extended the drilling program by adding 995 meters of additional reverse circulation (RC) and diamond drilling aimed at expanding near-surface Mineral Resources that would be suitable for open-pit extraction.

The extended program is on schedule to be completed within the next few weeks, and management expects to deliver an upgraded Mineral Resource and the results of the Scoping Study shortly afterwards.