Superior Resources' shares surge on back of promising assay results

Investors have responded positively to the news with the company's shares rallying approximately 40% in morning trading.

The resource drilling program focused on only 30% of at least 2.5 kilometres of outcropping lode strike and only to shallow depths, and it is worth noting that mineralisation remains open along strike and down dip.

These results will contribute to a planned revised Mineral Resource Estimate which should reflect an improvement on the current MRE of 1.27 million tonnes at 2.3 g/t gold for a resource of approximately 94,000 ounces.

The drilling has produced consistent relatively shallow high-grade mineralisation at both the Steam Engine and Eastern Ridge Lodes, confirming the current geological model.

Drilling has ranged in depth from 30 to 90 metres at the Steam Engine Lode and from 20 to 60 metres depth at the Eastern Ridge Lode.

The first assays received are from 28 shallow reverse circulation (RC) drill holes for a total of 1,375 metres.

The Steam Engine and Eastern Ridge gold-bearing lodes are shown in red. 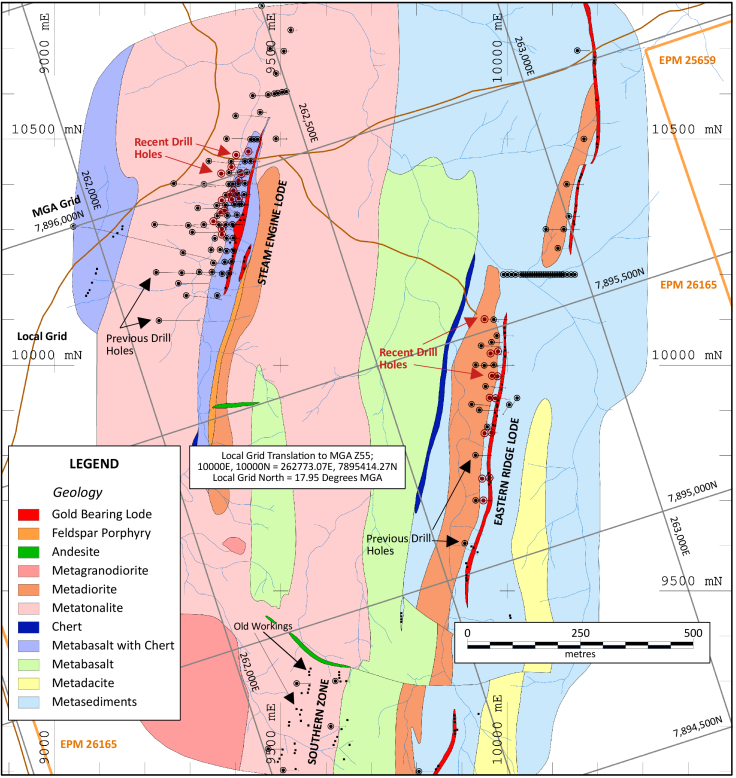 A combined total of approximately 3,500 metres of RC and diamond drilling is planned under the current extended program.

Discussing the tenor of the results and the group’s ongoing exploration strategy, managing director Peter Hwang said, “With this initial batch of assays all returning excellent gold mineralisation from near-surface, the near-term production potential of Steam Engine continues to build.

‘’The assay results further strengthen the current Mineral Resource and boosts our confidence for a positive scoping study.

‘’Based on visual observations during the drilling, we extended the program to give greater emphasis on expanding the near-surface Mineral Resource with holes along strike from the currently modelled Resource.

‘’So, our program is both a resource drilling program for the purpose of the Scoping Study and an exploratory program aimed at expanding the Mineral Resource.

“With mineralisation open along strike and down dip at both the Steam Engine and Eastern Ridge Lodes, there is obvious potential for growth.

‘’The current Mineral Resource Estimate is based on only 30% of at least 2.5 kilometres of outcropping lode strike and only includes near-surface mineralisation.

“Although the first batch of assays has taken longer than expected, we should see a regular flow of results going forward.

‘’In the meantime, we look forward to releasing a revised Mineral Resource Estimate after receipt of all assays and the results of a Scoping Study shortly afterwards.”