The promising assay results are from a total of 22 reverse circulation (RC) and diamond core drill holes.

This intersection is particularly important because, together with two earlier-reported holes from the Phase 1 program, they infilled a lower-grade near-surface portion of the current Mineral Resource.

The lower grade part of the Mineral Resource was based on adjacent historic drill holes that reported grades significantly lower than samples from the recent Phase 1 drilling.

The effect of the current result and the two earlier-reported holes will likely be a significant expansion of the high-grade portion of the Steam Engine Lode, potentially having a much more material impact when the resource is upgraded.

Deeper diamond core holes outside the established Resource area at the Steam Engine Lode has also increased management’s confidence, confirming a strong continuation of the lode down dip to at least 200 metres downhole depth.

Drilling from the poorly defined Southern Zone Lodes located to the south of the Steam Engine and Eastern Ridge lodes indicate that the lodes are of significantly high tenor with grades increasing at depth.

The location of drill holes which contributed to this latest batch of assay results are shown on the following map with previously defined gold-bearing lodes outlined in blue. 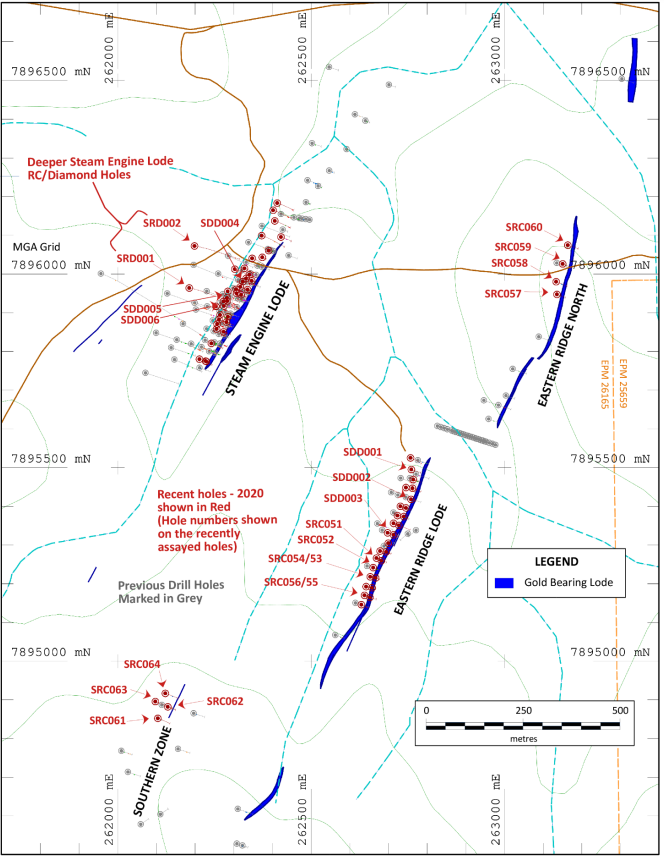 Highlighting the significance of these results in terms of resource expansion, Superior’s managing director Peter Hwang said, “We are very pleased with the latest batch of assays which continues to return robust high-grade intersections as well as further confirming the growth potential of the Steam Engine and Eastern Ridge lodes.

‘’The Phase 1 drilling has clearly demonstrated the robustness of the deposit and the significant potential for resource expansion along strike as well as down dip.

‘’This fourth batch of assays is expected to be the final batch relating to the mineralised zones.

‘’However, we won’t be slowing down at Steam Engine with plans being on track for the commencement of the Phase 2 drilling program next week.

‘’We are also advancing the initial Scoping Study, which we plan to deliver later this month.”