Program one consistently returned strong intersections of gold mineralisation in all holes and also extended the zone of mineralisation outside the current Resource envelope.

The company has been busy in the last few months. Just a week ago we reported that SPQ had released further promising assay results from the Steam Engine Gold Deposit, approximately 200 kilometres west of Townsville, Queensland.

The Steam Engine Gold Deposit is an extensive mesothermal gold lode system on which an Indicated and Inferred Mineral Resource Estimate of 1.27 million tonnes at 2.3 g/t for 94,000 ounces of gold has been established.

The assays were from a total of six reverse circulation (RC) drill holes that tested the potential to extend the Steam Engine Lode along strike.

This second program will comprise 3,000 metres of RC drilling and will focus on increasing the current Mineral Resource (1.27 million tonnes @ 2.3 g/t gold for 94,000 ounces) by:

- identifying new high-grade extensions at both the Steam Engine and Eastern Ridge lodes; and

- infill drilling of key zones within the Resource envelope where the first campaign returned significantly higher grades than reported by historic drilling.

The results to date are more than enough to complete a Scoping Study, but as is the nature of the company and managing director Peter Hwang, the SPQ is determined to get the best results possible.

The illustration below shows proposed drill holes compared with existing: 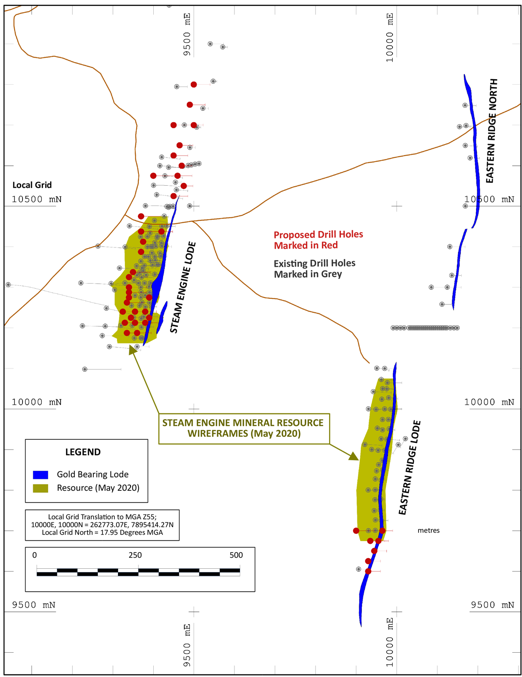 “Following the better than expected performance of the first program, we are very eager to continue drilling at Steam Engine,” Hwang said.

“Whilst the results received to date are more than sufficient to enable completion of our Scoping Study, launching the second drill program brings forward our focus on expanding the current Mineral Resources, which potentially increases the scale of any early mining operation.

“Notably, we are targeting a 100 percent increase to the strike length of the main Steam Engine Lode Resource area. The latest batch of assay results indicated a strong 150 metre continuation of high- grade mineralisation northwards in at the northern end of the Steam Engine Lode. The planned drilling will target a total of 400 metres of strike extension at this lode and up to a 150-metre extension of the Eastern Ridge Lode.

“In the meantime, we expect to receive the remaining 750 assays from the previous drilling in two batches, with the first batch due within a few days. We have also re-scheduled some of the deliverables in the Steam Engine development program, which will result in bringing forward the delivery of the Scoping Study to mid-November.”

SPQ continues to move forward and is approaching a series of milestones that could help it realise its aims and thus deliver substantial value shareholders.