The results triggered a surge of more than 30% in the company’s shares, and after opening strongly it continued to trade around these levels throughout the morning.

However, there could be more upside to come as there are 25 more holes still to be assayed, particularly given their significance in terms of an upcoming resource upgrade and prefeasibility study.

The results incorporated some spectacular bonanza grades of up to 184 g/t gold in smaller widths within high-grade intersections, including 5 metres at 38 g/t gold and 7 metres at 20.6 g/t gold, both from about 50 metres.

The results also featured wider intersections of 15 metres and 17 metres grading 2.3 g/t gold and 2 g/t gold at shallow depths ranging between about 20 metres and 30 metres.

The results are from the first 15 of 40 reverse circulation (RC) drill holes drilled in the Stage 2 program. 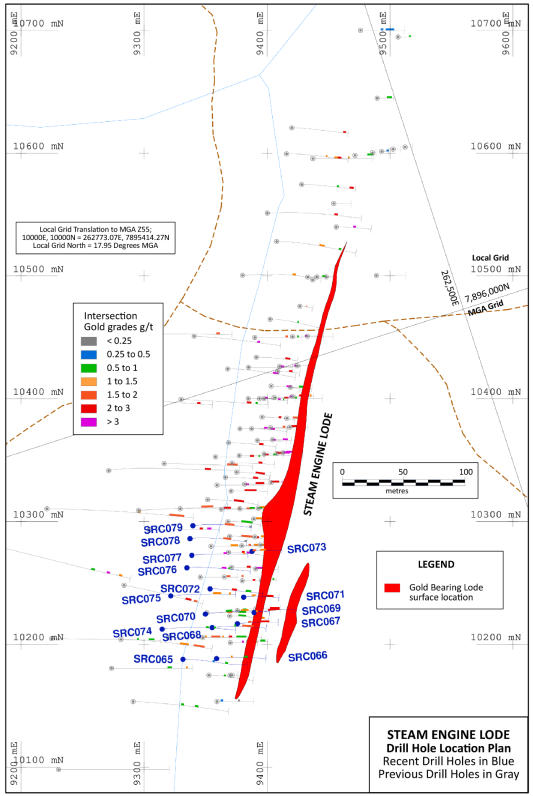 25 holes still to be assayed

By way of background, the 2020 Stage 2 drilling program at the Steam Engine Gold Deposit commenced on November 11 and concluded on 12 December 2020.

The program was a combination of exploration undertaken to increase the Mineral Resource, as well as additional infill drilling aimed at increasing the Measured and Indicated Resource categories.

The program comprised a total of 40 RC drill holes across 3,055 metres with drill hole depths ranging from 48 metres to 120 metres.

Each of the 15 drill holes targeted a large modelled low-grade zone of the Revised Mineral Resource and were designed to upgrade the zone.

The remaining 25 holes where assays are still outstanding were designed to extend the mineralisation envelope at the Steam Engine and Eastern Ridge Lodes and identify additional high grade ore shoots.

The Stage 2 drilling results will be incorporated into a planned PFS, which will commence immediately after the delivery of the Steam Engine Project Scoping Study, expected in early February 2021.

The upcoming results are much anticipated given the significant impact they could potentially have on the metrics that underpin a revised mineral resource and scoping study with that data feeding into the upcoming PFS.

Consequently, the impressive results returned from the first 15 holes suggest there could be more promising news on the horizon and this is likely to spark investor interest in the stock as they weigh- up the implications for the resource upgrade and PFS, traditionally market-moving developments for mining companies.

Commenting on these developments and the outlook for Superior Resources in 2021, managing director Peter Hwang said, “We are very pleased to have met one of the objectives of the Stage 2 program in the first batch of Stage 2 assays, which was to identify new high-grade ore shoots in the Steam Engine Lode.

‘’This has clearly been achieved with the results delivering the two best holes drilled to date at the project.

“The spectacular grade intercepts reported from these two holes together with an ounce and a half-grade intercept reported in September 2020, confirm the presence of a very high-grade ore shoot.

‘’This latest development together with the recent realisation of the size magnitude of the new Dinner Creek Lode, demonstrate that we are only just beginning to uncover the project’s potential.

“With the resources outlook extremely bright, 2021 promises to be an eventful year for Superior.

‘’Activities at Steam Engine will be ramping up with an accelerated resource and mining assessment program in conjunction with further resource expansion drilling programs and drilling to test the recently identified Dinner Creek Lode.’’

Timely exposure to copper and nickel

Superior Resources will also be developing a maiden Mineral Resource Estimate at the Wyandotte Copper Deposit and targeting other copper prospects at the Greenvale Project.

At Greenvale, the company holds ground covering the majority of the Ordovician sequences in the region, which includes at least three significant copper-gold porphyry and VMS prospects, an advancing high-grade gold deposit and a regionally large magmatic sulphide nickel-copper-cobalt prospect.

The sequence of rocks in the Greenvale area is believed to be the northern-most extension of the remnant New South Wales Ordovician Macquarie Arc rocks that host the large Cadia and North Parkes porphyry copper mines.

With copper and nickel being the predominant mineral endowment at Greenvale, the large Big Mag prospect will also be in the company’s sights.

It is a right place, right time story for Superior Resources with the gold price appearing to be well supported above US$1800 per ounce, equivalent to about $2350 per ounce in Australian dollar terms.

Furthermore, copper is close to an eight-year high, while nickel has also pushed up towards levels not seen since 2019.