The Santa Comba project is located in a productive tin and tungsten province adjacent to critical infrastructure: 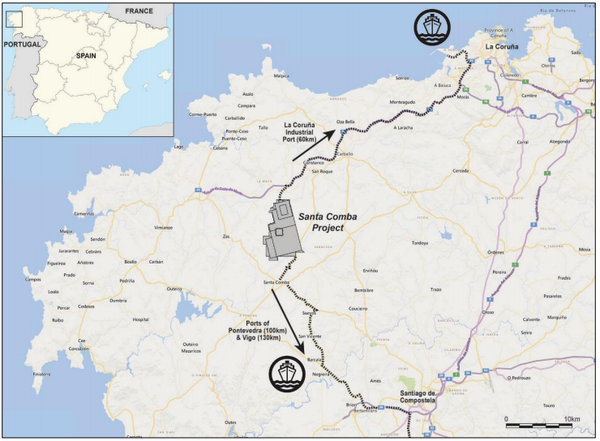 The results confirm the continuity of tungsten (wolframite) mineralisation with the initial drill hole being located ~60m along strike from pre-existing drill hole intersections. The tungsten mineralisation intersected occurs to the east of the JORC (2012) Inferred Mineral Resource Estimate, thereby supporting Rafaella’s ambition to expand the resource base.

Assay highlights from drill hole 19DD0001 are listed below:

These results come from the upper 150m of the drill hole with assays pending for the remainder of the hole (end of hole depth 213.85m).

To date, 15 drill holes have been completed on the project totalling 1,636m. The majority of the drilling has occurred in and adjacent to the operating aggregate quarry area where the majority of the JORC (2012) Inferred MRE was previously defined. 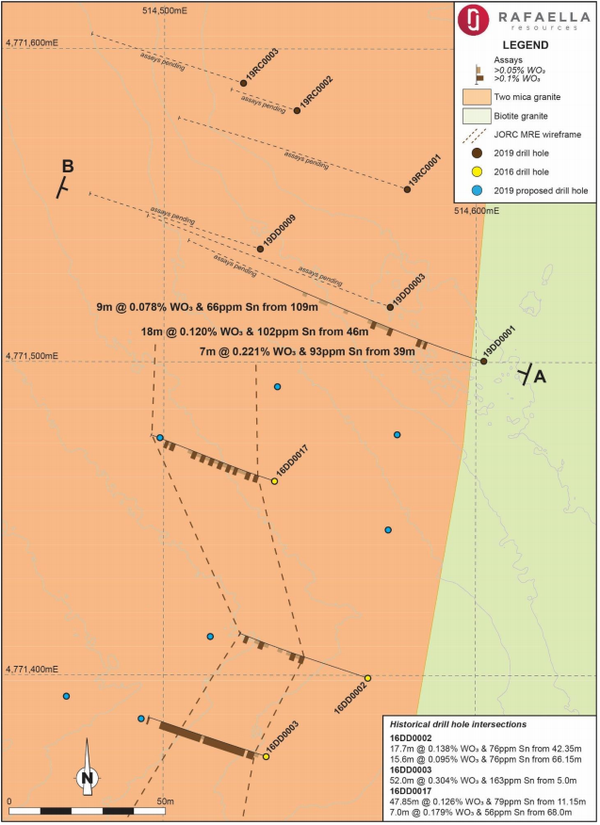 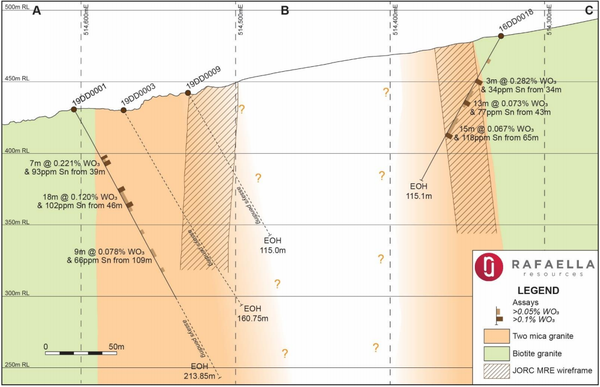 Local drilling contractor Geonor Sondeos y Peforaciones, S.L. now has two diamond drilling rigs at the site currently drilling around the Quarry prospect and is expected to bring a third rig within the next two weeks.

Rafaella has also contracted with Sondeos y Perforaciones Industriales del Bierzo, S.A. (SPI) for the use of a reverse circulation (RC) rig that is currently drilling the highly prospective Eliseo prospect to the east of the quarry. SPI is a Spanish drilling contractor with considerable experience in RC drilling.

With the German Government development funding already secured, subject to a positive feasibility study that has already commenced, and mining approvals in place, Rafaella intend to fast track the Project through to production and early cash flows.

Rafaella’s managing director Steven Turner said: “The drilling is progressing rapidly with over 1,600 metres drilled since drilling commenced on the 16th of August. This initial hole has provided further confidence around our aspirations to expand the Mineral Resource Estimate. We are very excited to share further results as they are delivered over the coming weeks. We remain on schedule to complete our initial drill programme and deliver an updated JORC Resource by the end of Q1 2020.”

In addition to the Santa Comba Project, Rafaella also owns the McCleery cobalt and copper project in Canada, and the Sandstone gold project in Australia, both of which were previously under-explored and hold significant potential.