Shares in Galileo surge on the back of exploration results 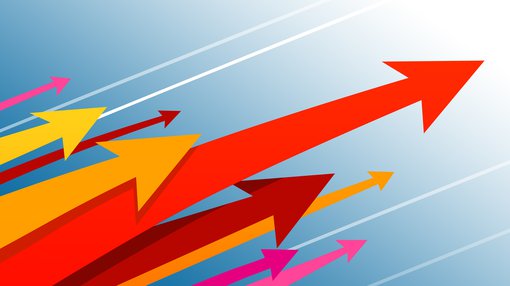 Galileo Mining Ltd (ASX:GAL) looks more and more likely to follow in the footsteps of Legend Mining Ltd (ASX:LEG) as exploration results from its Lantern Prospect in the Fraser Range, Western Australia come to hand.

After releasing some exceptional drilling results, investors flocked to the stock as it traded as high as 12 cents per share, up 14% on the previous day’s close.

However, this could be the start of a much more significant rerating when one considers the action that has occurred in close proximity to Galileo’s territory.

There are plenty of parallels between Galileo and Legend and their potential to be another Nova Bollinger with all of them looking to uncover high value Nova style targets in the Fraser Range nickel belt.

There is also a strong link on the personnel side with Mark Creasy being the founder and major shareholder (31%) of Galileo.

Creasy was integral to the discovery of Nova Bollinger, and he is one of the most successful players in the Australian mining industry when it comes to discovery strike rates.

He knows the Fraser Range like the back of his hand, and he went public when Legend Mining came up with some very promising, but early stage exploration results by Legend at what was then called the Rockford Project, but is now termed the Mawson discovery.

As results from the exploration hole at the Rockford Project came to hand Creasy said we have found the haystack, now we just need to find the needle.

There is a fair chance is making similar comments following the exploration results released by Galileo today.

Consequently, this isn’t just a nearology play - there are so many similarities, it is almost déjà vu.

The aircore exploration hole results from Rockford were released in April 2018, resulting in the company shares increasing some 50% to 3.5 cents.

The diamond drill results from a hole drilled immediately adjacent to the exploration hole were released in December last year, resulting in a 150% share price surge.

The following graphic shows the initial aircore hole that created all the excitement (RKAC183) which was the main basis for targeting the diamond drill hole (RKDD007) in the same location.

This is a graphic of the reverse circulation drill results released by Galileo today. 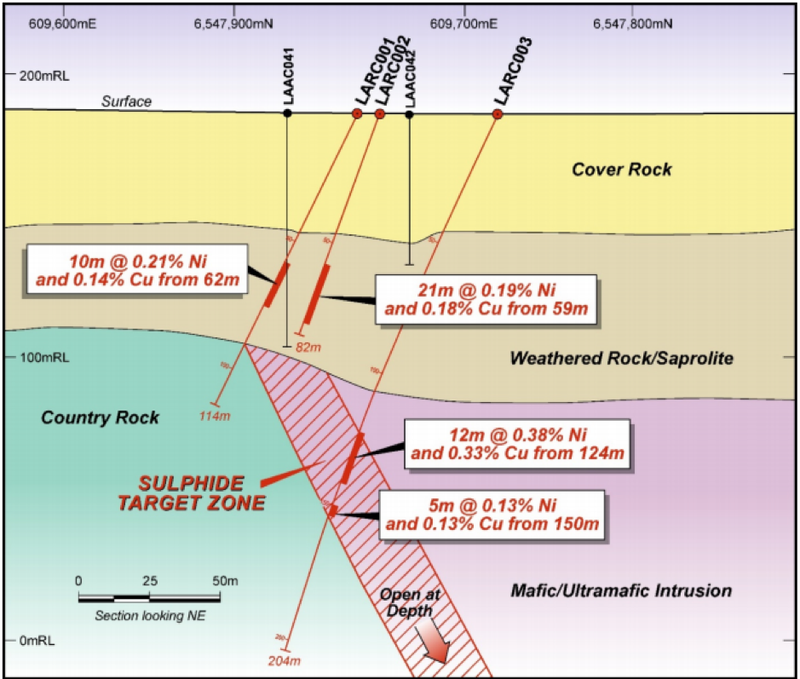 But also note the strong grades of LARC002 that hasn’t even entered the sulphide target zone - this could also be the start of something big.

Two drill holes (LARC001 and LARC002) confirmed the geochemical anomaly, while the third drill hole (LARC003) identified the source of the anomaly by intersecting nickel-copper sulphide mineralisation in fresh rock.

Disseminated sulphide mineralisation in LARC003, with an estimated maximum of 12 per cent sulphide over a one metre interval, occurs at a contact zone between a mafic/ultramafic intrusion and the host country rock.

This result is particularly important as the disseminated sulphide intercept may be close to a zone of increased sulphide mineralisation (massive, semi-massive or net textured) with the capacity to contain higher grades of nickel and copper.

The drill hole intersection occurs on the edge of a magnetic feature which is interpreted to represent the contact between the prospective intrusive rocks and the host country rock.

Over two kilometres of strike length remains to be tested for mineralisation and the intersection is open at depth. 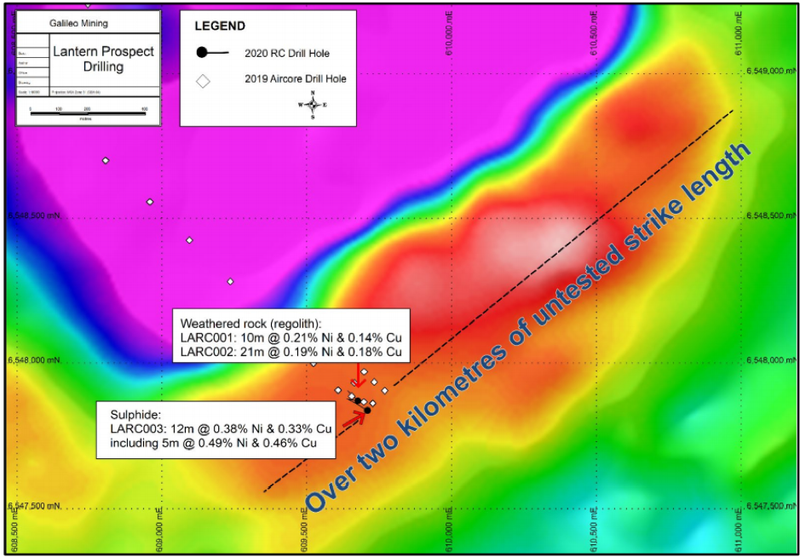 Commenting on the nickel and copper assay results, Galileo managing director Brad Underwood said, “This is an excellent result from the first ever RC drilling program at the Lantern Prospect.

‘’We have now discovered a fertile mineralised system containing nickel and copper sulphides.

‘’Our next step is to define the extent and quantity of the target metals and, given that we have over two kilometres of untested strike length at this one target alone, the potential for a large discovery is outstanding.”

The ultramafic target at Lantern is one of a number of prospective intrusions within an area of approximately 10 kilometres by 8 kilometres.

A separate EM conductor occurs two-and-a-half kilometres north of drill hole LARC003 and is the current subject of RC drilling for the purpose of downhole EM surveying.

Additional intrusive targets within the area have been developed from detailed magnetic and gravity data sets, and aircore drilling programs have been designed to look for geochemical anomalism using the same methodology as that which led to the initial discovery of sulphide mineralisation at Lantern.

The Lantern prospect is approximately 100 kilometres from the operating Nova nickel mine and 40 kilometres along strike from Legend Mining’s Mawson Prospect as shown below. 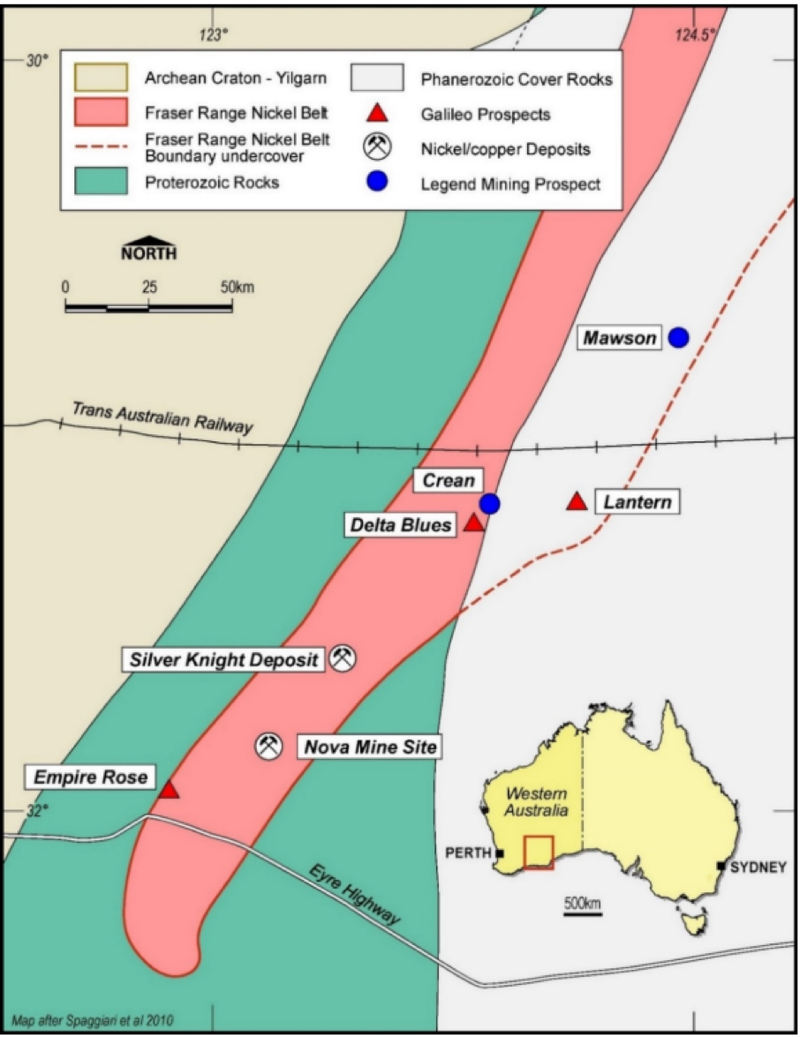 Galileo’s upcoming work programs include downhole electromagnetic survey at LARC003 with the prospect of highlighting something even bigger and better, or perhaps pointing to the prospect of a much larger mineralised zone.

Stepout aircore and RC drilling will also be conducted around LARC003 which could provide indications that it is part of a much larger strike.

Aircore drilling will be conducted at the newly identified magnetic and gravity targets to search for more geochemical anomalies associated with prospective rock units.

Management will also be developing a strategy to undertake diamond drilling of key targets with the potential of uncovering a discovery hole which would make this another Creasy coup.