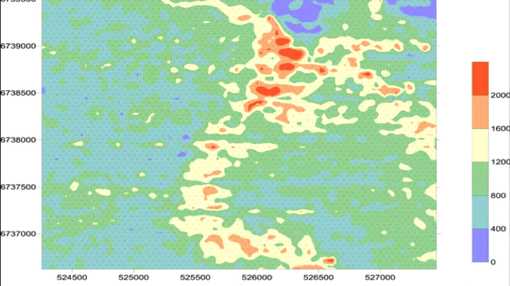 While the potential was recognised inthe past, virtually no VMS-focused exploration has been completed to date, as exploration at East Laverton has targeted greenstone‐hosted nickel and gold mineralisation.

These nickel-gold targets are largely exclusive of exploring for VMS deposits which are typically hosted by the surrounding rocks. A recent base metal intersection of 19.25 metresat 0.35% zinc and 0.1% copperhas provided this new VMS impetus at East Laverton.

The hole that intersected base metals was drilled to test an electromagnetic conductor identified to the west of the Stella Range ultramafic belt. Thisoff‐belt conductor, named Dragon 2, is situated where a VMS system could be expected tooccur.

A second adjacent conductor, Dragon 3, remains to be tested and may represent a more central partof a VMS system with higher grades of zinc and copper.

Further drilling at this VMS prospect will be completed as part of the next round of drilling for highpriority nickel sulphide targets, scheduled for early October.Details of drill holedesign will be announced shortly.

In addition, the moving loop electromagnetic (MLEM) survey currently underway at the project will beexpanded to the area around the base metal intercept to test for additional off‐belt EM anomalies which may represent VMStargets.

The survey is being arranged by Newexco, who are also involved with exploration at Sandfire Resources’ (ASX:SFR) DeGrussa VMS deposit, as well as a string of high grade nickel sulphide discoveries.

A prospectivity assessment of the larger project area for VMS‐style mineralisation has been initiated andwill continue concurrently with the ongoing testing of this more advanced target.

This review is expected togenerate additional VMS prospects with a number of new drill targets to betested in 2015.

VMS deposits usually form in clusters, with several deposits possible within a district area of tens ofkilometres. SGQ has a dominant landholding in this region with over 2,000 km2which provides a strategic advantage and exploration upside following an initialVMS discovery.

The emplacement of high magnesium oxide komatiiteultramafics at East Laverton demonstrates that these favourable conditions are present.

VMS deposits and komatiite hosted nickel deposits represent the most primitive phases of economicmineralisation in the Yilgarn Craton, and form early and in similar settings. As such, they are often seen as“proxies” for one another.

“The recent and encouraging drilling results at conductor Dragon 2, together with the positive assessmentof the broad VMS potential at East Laverton, make the escalation of VMS exploration compelling.

We will be drill testing conductor Dragon 3 in October, and establishing more VMS targets for explorationas soon as practicable. The VMS potential is a real bonus for the company, on top of our high quality nickel sulphide prospectswhich will also be drilled in October.”

Copper soil anomalism extends from Desert Dragon for over 5 km and overlies the intersection of the Stella Range belt and a major cross‐rift structure known as the Churchill lineament.

At the Balmoral gold prospect to the south, the copper anomaly is interpreted to beassociated with a local east‐west cross structure.

The correlation of the soil anomaly with underlying structures addsimportance to this geochemical response.

The intersection had lowcorresponding nickel and zinc values, suggesting a supergene concentration, and was below the transported, indicating the copper could be sourced from underlying basement rocks.