Is ScandiVanadium sitting on another Nova Bollinger?

ScandiVanadium Limited (ASX:SVD) has provided an update on progress at its 100% owned Gnama Nickel Project in the Fraser Range of Western Australia, including details regarding the existing geophysical database and upcoming electromagnetic survey.

The former was discovered by Sirius Resources which was subsequently taken over by IGO (ASX:IGO) in a $1.8 billion deal.

There is still significant activity at the Mawson discovery. Legend Mining (ASX:LEG) has released drilling and downhole electromagnetic results in recent weeks suggesting there is the potential for expansion of what is already shaping up as a high profile project.

Legend entered a trading halt on Friday pending the release of an announcement regarding exploration results after defining a ‘’very strong’’ off hole conductor with the results supported by DHTEM survey, a factor that will resonate with Frances based on his upcoming exploration strategy.

LEG has a market cap of $417 million, having increased substantially on the Mawson discovery.

With a market capitalisation of $18.5 million, there's upside potential in SVD, however is in the very early stages of exploration and success is no guarantee.

The following map shows the close proximity of the Vanatech (wholly-owned subsidiary of SVD) tenements to Nova Bollinger and the other Creasy Group interest, Silver Knight. 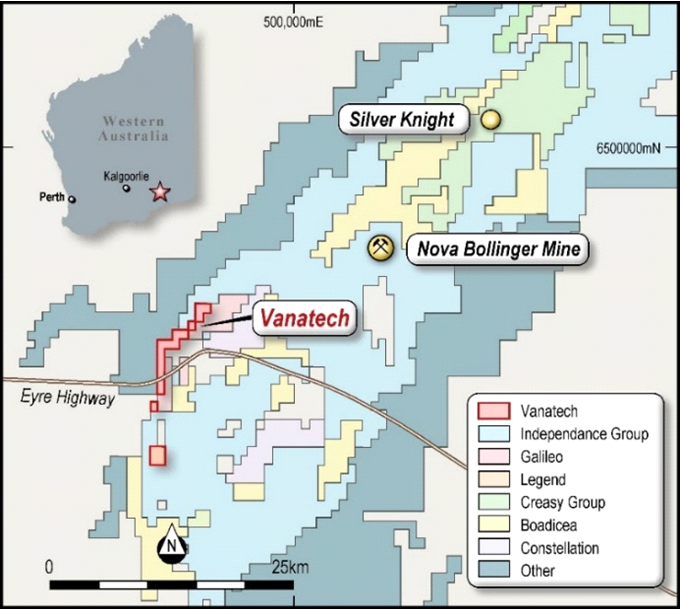 Frances discussed SVD's strategy in employing similar techniques in saying, ‘’The ability to run a higher-powered ground EM over our project compared to previous surveys completed in 2005 allows us to investigate deeper parts of the system that have not previously been tested.

‘’We are planning a SQUID survey to test up to 550 metres depth, potentially identifying the source of the 20 metre thick nickel-copper-cobalt anomaly in historic drilling.”

According to the CSIRO, SQUIDs (Superconducting Quantum Interference Devices) are highly sensitive sensors capable of detecting magnetic fields which are one hundred millionth smaller than the earth’s magnetic field.

This makes them ideal for detecting and distinguishing deeply buried, highly magnetic sulphide ore bodies, including nickel and silver ores.

As indicated above, the Gnama Project is located at the southern end of the Fraser Range, and the discoveries that have occurred along the trend to be surveyed by SVD bear similar characteristics.

These include shallow oxide nickel-copper-cobalt anomalies within barren intervals below supergene enrichment.

Gnama was first identified by Newmont in the 1960's from geochemical sampling and shallow drilling.

Sirius then held the tenement from 2004 to 2011 where the group intersected significant elevated nickel, copper and cobalt enrichment in the oxide zone at depths of between 28 metres and 36 metres.

Frances drew attention to comments made by Sirius at the time when the group said, “Whilst the elevated levels of nickel and cobalt could be explained by lateritic enrichment, the presence of copper suggests that the underlying rocks may contain sulphide mineralisation.”

While Sirius discovered Nova in 2012, a year after drilling the Gnama tenement, management noted that there was still potential to test for sulphide mineralisation below significant enrichment zones at Gnama South.

The following diagram shows the aforementioned intercepts that occurred in the vicinity of the 30 metre mark. 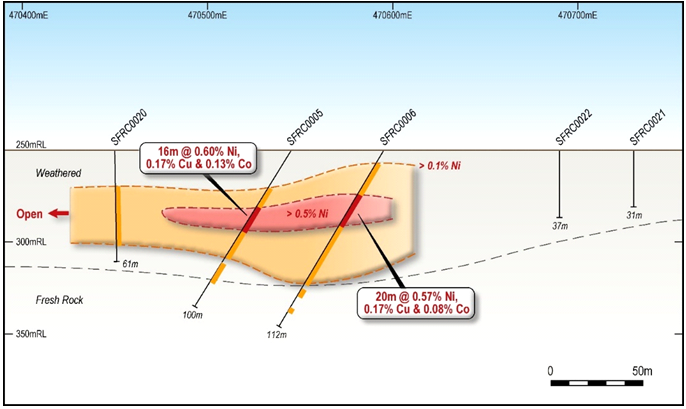 ScandiVanadium has secured access to a database of historic geophysical survey data including ground-based MLEM and FLEM surveys conducted in 2005.

Surveys are thought to have targeted shallow EM anomalies identified by the Questem airborne survey in 1997.

The 2005 ground-based surveys used both fluxgate (B-field) and coil (dBdt) antennas, which was common practice at the time as B-field fluxgates were still considered a relatively new technology.

Five EM anomalies were identified in historic data, however none of the anomalies persist into the late time channels.

Given this backdrop, Frances said, ‘’Using modern surveying techniques, SVD intends to expand the depth of investigation beyond what was achieved in the 2005 survey to depths of approximately 550 metres.

‘’This can be achieved by increasing the size of the transmitter loop from 200 metres to 400 metres and using a Jessy SQUID receiver in the slingram configuration.’’

The company is planning to undertake a SQUID survey in December half with the aim of identifying nickel-copper mineralisation.

This next phase of ground EM will provide valuable data to help determine the sulphide source of the 20 metre thick nickel-copper-cobalt oxide mineralisation identified near-surface.

The combination of high-tech SQUID surveying and ground electromagnetic exploration could well provide an insight as to whether SVD is sitting on another Nova Bollinger.