The White Rose prospect is located within the company’s Munarra Gully copper gold project, which is located 50km north to north east of the township Cue. 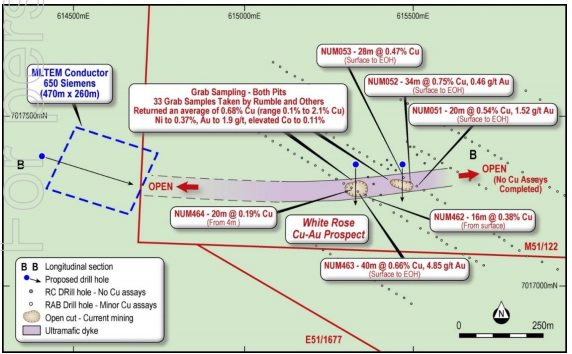 The conductor lies approximately 600m west along strike from the open cut workings, where historic data has returned the following high-order intercepts:

According to RTR, the parameters of the conductor have been modelled as a west north west dipping plate measuring 470m by 260m with a conductance of 650 siemens, which is in line with disseminated to semi-massive pyrite – chalcopyrite mineralisation. Depth to the top of the plate is estimated at 120m.

About the White Rose prospect

The White Rose prospect is a mineralised intrusion that hosts two open cuts and runs from east to west. Historic RAB drilling has defined exceptional copper-gold mineralisation that is completely open along strike.

Over the last eight to 10 years, the current owner established a small gold plant on site to process shallow saprolitic gold mineralisation as defined by previous RAB drilling.

The company is currently earning into the Munarra Gully project as per acquisition terms in ASX announcement 27 February 2018.