EHR Resources (ASX:EHX) and its joint venture partner, Eloro Resources, have both updated the market regarding results of the recently completed first reconnaissance drilling program at the La Victoria Gold-Silver Project in Peru.

As noted in Eloro’s announcement, this initial reconnaissance drilling has intersected 7.31 grams of gold per tonne over 3.4 metres in the upper part of a major epithermal system.

2,261 metres of reconnaissance diamond drilling in eight holes at the Rufina Target on the La Victoria gold property has been completed. 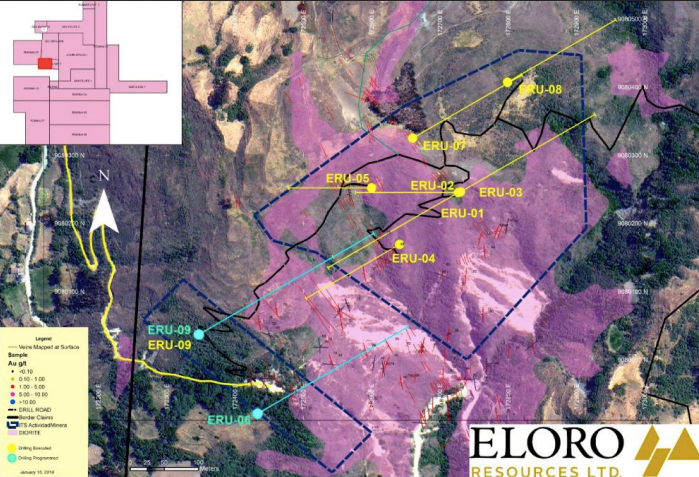 Highlights include (all core lengths):

This will now be followed up with further deeper drilling in the Rufina zone to test for potential high-grade zones below this upper area.

It should be noted here that EHX remains a speculative play and investors should seek professional financial advice if considering this stock for their portfolio.

In commenting on today’s announcement, Eloro CEO Tom Larsen said: “We are now proceeding with deeper drilling on the Rufina zone. The reconnaissance drilling completed thus far is primarily in the hill side, hence the deeper part of the system is potentially just below the level of the main access road where there are a number of artisanal workings.

“We have also retained the services of Rhind, a Peruvian-based consulting firm, to facilitate the permitting for the next phase of drilling on our other major targets including Victoria-Victoria South, Ccori Orcco, San Markito South and San Markito.”

P.Geo. Chief technical advisor for Eloro, Bill Pearson said: “All of the reconnaissance drill holes intersected wide zones of mineralization and alteration with a significant number of gold intersections in different structures.

“These intrusives are marked by prominent magnetic anomalies. Our recently completed ground magnetic survey, which extended coverage in the south part of the property, has identified an additional 8 likely prospective intrusives, bringing the total to 18 including those already confirmed in our major target areas.”

Pearson also noted that the geological work done so far indicates an extensive multi-phase low sulphidation epithermal gold mineralising system on the La Victoria property which extends from Rufina north-eastwards to Victoria-Victoria South — a distance of some 2.5 kilometres.

“Gold mineralization occurs in a variety of structural settings both parallel to the northeast trending Puca Fault as well as perpendicular along likely tear faults related to this structure. Mineralization has been identified vertically over 1 kilometre from elevation 3100 metres at Rufina to elevation 4200m at San Markito as well as along strike on different structures for up to 3+ kilometres,” Pearson concluded.

EHX has until February 20 to elect to proceed to the Stage 2 earn-in period, whereby it could acquire an additional 15 per cent interest in La Victoria by spending an additional CAD$3 million on exploration on the project by July 31.