Prioritised assay results for the first four drill holes at the Mt Maitland South prospect have returned significant gold intercepts, including 7 metres at 3.3 g/t gold from about 37 metres (MMC001) and 8 metres at 1.7 g/t gold from just over 100 metres.

As a backdrop, the Maitland South Prospect is a long outcropping shear zone of more than 550 metres hosting mineralised sulphidic quartz veining as shown below. 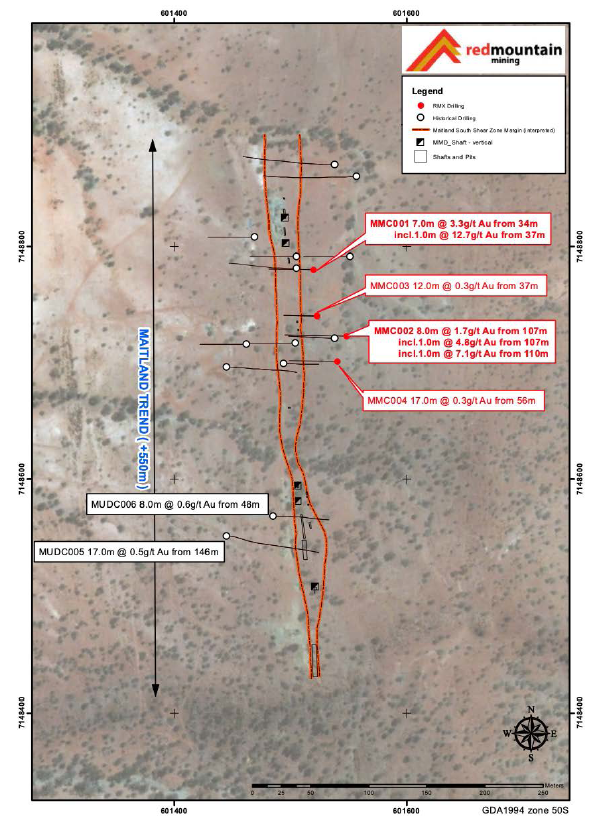 The prospect is characterised by numerous historical workings and shafts in addition to several historical drill holes proving endowment along its entire length.

Drilling results from both holes were particularly encouraging as they contained a higher grade core, and both highlight the potential for a high-grade system which is currently open down-dip of these holes.

Assay results from MMC003 and MMC004 intersected significant shallow mineralisation, highlighting the thickness of the Maitland South Shear Zone in general and also the potential for hosting significant widths of mineralisation.

All assay results have now been returned from the ore zones at the Maitland South prospect, with remaining samples from the prospect to be reported over the coming weeks.

Aside from Maitland South, the Lenanphyl Prospect is characterised by a series of historical shafts, workings and drilling that have featured significant results.

Twelve RC holes for 849 metres were drilled at the prospect with assays expected to be announced over the coming weeks.

Zones of magnetite-silica alteration were intersected with quartz-carbonate veining bearing disseminated sulphide within the interpreted ore zone, a positive sign in terms of the quality of upcoming results.

Elsewhere, the Second Chance South Prospect is a coincidental geochemical and structural target that has never been tested by drilling.

Nine holes for 531 metres were drilled at the prospect in the form of a single traverse of 25 metre-spaced angled holes to test the key zones of the target.

Fresh rock was intercepted close to surface, and there were some encouraging minor zones of sulphide bearing quartz veining.

These results are expected to be released over the coming weeks once reported by the laboratory.

Red Mountain also has the Jacia Prospect in play, a multi-element (copper-zinc-gold-silver) geochemical anomaly hosted within sheared basalts on the western margin of the greenstone belt.

Two RC holes for 127 metres were drilled into areas of geological interest with both intersecting zones of silicified quartz breccia with minor disseminations of sulphide hosted within sheared basalts.

Again, these results are expected to be released over the coming weeks, suggesting today’s share price momentum could be continued. 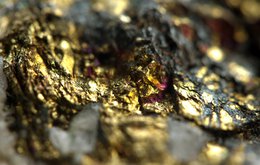 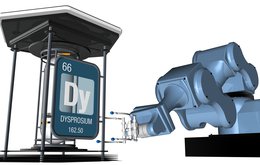 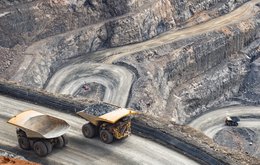