Red Mountain Mining Limited (ASX:RMX) has today outlined its plans for the second phase of drilling at its 100% owned Mt Maitland Gold Project in Western Australia.

The Mt Maitland Gold Project comprises a 62km2 parcel of tenure located approximately 90km north of Meekatharra in the Murchison Goldfield and contains two mineralised shear zones over a strike length of 19km within an Archean greenstone belt.

This particular phase of drilling will focus on the high priority, high grade Maitland South prospect, with drilling expected to commence in March 2021 once approvals from Department of Mines have been received and necessary heritage clearances have been completed.

The phase II ~2,000m, ~20 hole RC program is aimed at assessing the continuity of the high grade mineralisation both along strike and down dip of existing intercepts, as well as systematically testing the entire ~500m length of endowed Maitland South Shear Zone. 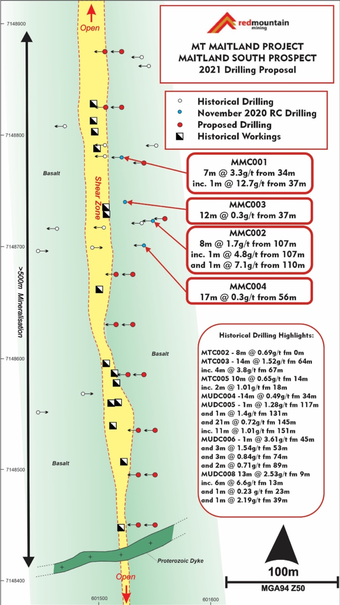 Prior assay results from maiden Maitland drilling in November 2020 returned significant intercepts from all four holes at the prospect. Results included:

These results are complemented by significant historical drilling results from July 2020 when RMX acquired the project.

Such promising assay results from prior drilling programs demonstrates the thickness of the Maitland South Shear Zone and a high grade component to the zone which eludes to the potential for it to host an economic gold deposit.

Mineralisation is currently open at depth, with the mineralized structure remaining open and untested to the north and south of the current drilling footprint.

Collectively, 1,850m of RC drilling was completed for 27 holes and focused on four primary targets: Maitland South, Jacia, Lenanphyl and Second Chance South, and gold assay results from the latter two have been received.

The Second Chance South Prospect is a coincidental geochemical and structural target that had never been tested by drilling.

Notable assay results received from drilling at the prospect include:

Fresh rock was intercepted close to surface, with basalts, mafic and ultramafic schist, BIF and a Proterozoic dolerite dyke was intersected within drilling. Mineralisation is associated with quartz veining hosted within sheared zones within this package of rocks.

RMX considers these results as particularly pleasing as these drill holes are the first holes drilled at this ~1.1km long geochemical target. 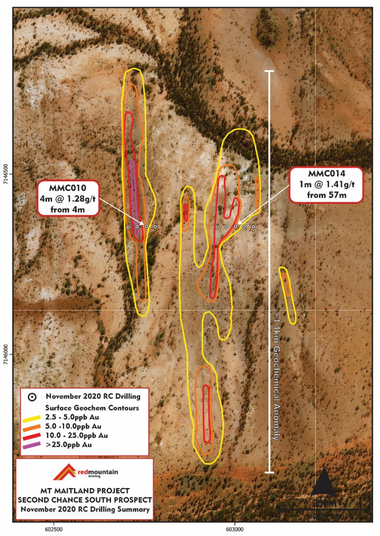 The Second Chance South assay results are considered highly promising as they have validated the use of the historical geochemical data set as an exploration targeting tool.

Further, numerous mineralised intercepts were received from RMX’s drilling at the Lenanphyl Prospect.