This incorporates a marketing services and offtake agreement and equity investment of up to $1.5 million.

As a cornerstone investor, Transamine must believe the project stacks up and has agreed to provide marketing and logistics services to Galicia Tin & Tungsten S.L. (GTT), the 100% owner of the project.

In terms of a heads of agreement negotiated in May, GTT is currently the subject of an agreed acquisition by Rafaella.

Rafaella is targeting Santa Comba as a development project capable of being fast-tracked to production and the group has received an offtake offer from H.C. Stark Tungsten GmbH (HCS) with associated development funding from the German government.

Highlighting the importance of this development for Rafaella, Executive Director Ashley Hood said, “The financial and strategic endorsement of such a well-respected and venerable trading house such as Transamine is a real vote of confidence for the Santa Comba Project and its potential.

“Transamine’s marketing and logistical support will be vital as the project ramps up production during its early stages and we look forward to working with Transamine in the years to come.”

The project also boasts proximity to deep-water ports and has considerable infrastructure already in place, including a partially completed process plant.

As part of the services agreement, Transamine will assist in facilitating the logistics for the delivery of the tungsten concentrate already under an offer by HCS and will acquire any additional concentrate not subject to the HCS offer on standard market terms.

Furthermore, Transamine Holdings and Investments, Hong Kong (THIL) has agreed to support Rafaella’s proposed $2.6 million equity raising with the commitment of $1 million followed by a further $500,000 upon the delivery of a positive feasibility study and the execution of the approved German government development funding.

The subscription agreement and marketing services and offtake agreement are subject to final documentation.

As a condition precedent of the project acquisition completion, Rafaella needs to raise $2.6 million, with Transamine committing $1 million and the remaining $1.6 million by institutional investors.

As indicated below, the project, which is already permitted for underground and open pit mining, is located near the township of Santa Comba in Galicia, north-west Spain, and covers the seven kilometre long Santa Comba granite massif. 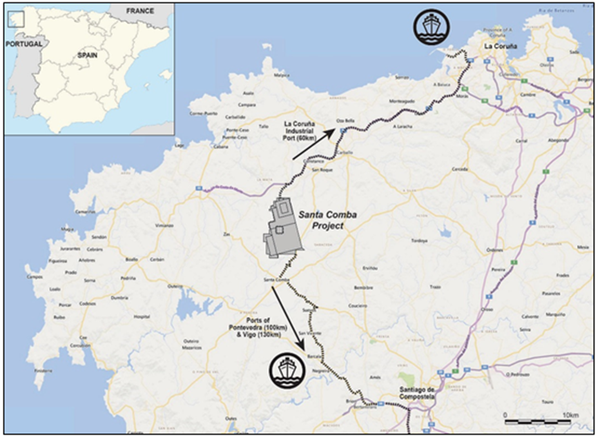 The project also offers significant upside potential with a recently announced near-surface Exploration Target of between 16.2 million tonnes and 48.6 million tonnes of prospective rock, grading between 0.15% and 0.23% tungsten.

As is usually the case at this stage, the potential quantity and grade of the Exploration Target is conceptual in nature.