Rafaella has entered into a conditional Heads of Agreement to acquire 100% of the shares of the private Spanish company Galicia Tin & Tungsten (GTT), owner of the Santa Comba project.

GTT, holds 15 granted mining licences that are valid to 2068, in the Spanish province of La Coruña, which is part of the autonomous community of Galicia – a top-tier mining jurisdiction in a known rich tungsten and tin province. The tenements cover the seven kilometre long Santa Comba mineralised granite massif. 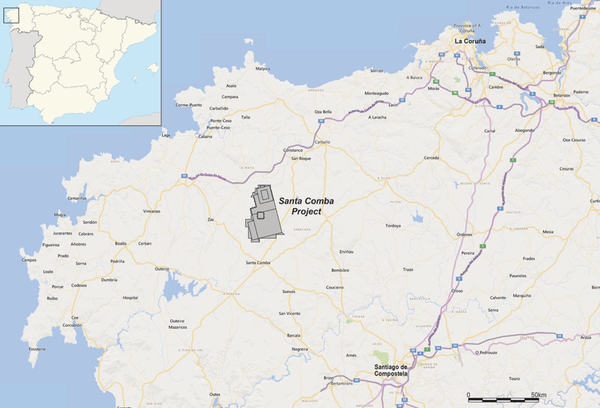 The company intends to focus on development of the newly discovered near-surface mineralisation, potentially as an open pit, and restarting the high-grade Mina Carmen underground mine.

Previously, the Santa Comba underground was mined in commercially significant quantities between 1980 and 1985. However it became uneconomic due to low tin and tungsten prices at the time.

Demand for tungsten and tin is now surging – as are their prices. This comes down to the metals’ varied industrial uses including construction, automotive, aerospace and electronics.

These improved economic present RFR with a compelling opportunity to re-commission the mine.

On top of that, there’s GTT’s recent discovery of the near-surface Resource at Santa Comba, suggesting significant additional low cost tonnage could be developed via open pit mining.

The project is fully permitted for underground and partial open pit mining. 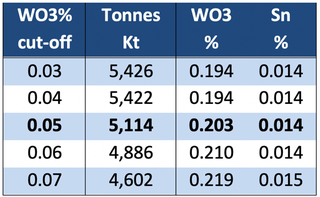 The near-surface disseminated and veinlet JORC (2012) Inferred MRE is based on 23 drill holes (2,219m) conducted over less than 10% of the prospective endogranite lithology. Individual lode widths range from 2m to 30m, while 5.1 million tonnes grading an average 0.21% WO3 (0.05% WO3 cut-off) has been defined.

As part of feasibility studies, the company will assess this style of mineralisation for potential open pit mining.

The project also hosts a high-grade, vein-hosted underground JORC (2012) Inferred Mineral Resource estimate of 234,000 tonnes at 0.95% WO3 and 0.28% Sn contained within four primary veins within the historic Mina Carmen underground mine.

However, that represents just a part of a non-JORC historical estimate completed in 1987 by previous owners. That estimate identified vein-hosted mineralisation across seven primary veins.

Considerable exploration potential has been identified both along strike and at depth at the primary prospects of the Quarry and Eliseo where mineralisation is still open. These prospects will be the main focus of proposed Resource extension and infill drilling program.

Drilling and resource modelling has covered only a fraction of the prospective endogranite lithology, providing further encouragement for additional resource potential. Significant underground development of circa 7,000m remains accessible at the project, including the large capacity primary access ramp. 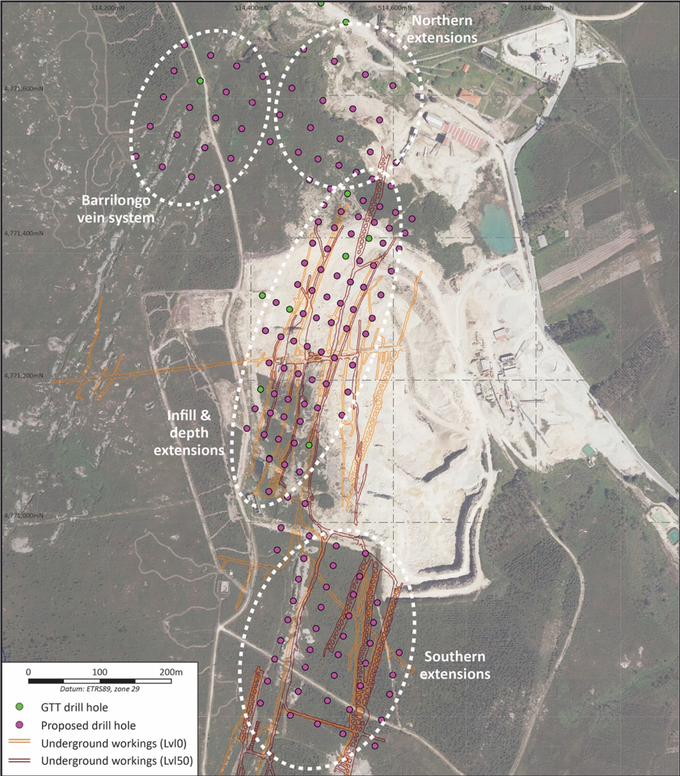 Rafaella is targeting a low cost, high margin tungsten-tin mining operation based on the shallow open pit Resource and the sunk capital expenditure.

The project is subject to an offer for offtake with leading global supplier, H.C. Starck Tungsten GmbH, which has obtained pre-approval for a Federal German Government Untied Loan Guarantee Scheme of up to €11.0 million (A$17.8M) to fund pre-production development capital expenditures at the project.

Post-acquisition, Rafaella plans to spend $1.3 million on a circa 8,000 metre drilling campaign to upgrade the Inferred Resource and increase the overall Resource base.

The company also intends to carry out a $1 million feasibility study, as required to access the German Untied Loan Guarantee Scheme.

To support the development of Santa Comba, Rafaella has proposed a share placement aiming to raise $2.6 million at 20 cents per share.

Details of the Deal

The proposed transaction would see Rafaella issue 17.5 million shares to the vendors at 20c per share.

The vendors will earn 15 million more shares once GTT achieves a JORC-compliant Resource (Measured and Indicated) of a minimum 10,000 tonnes contained WO3, grading at least 0.18%.

GTT will issue a further 15 million shares to the vendors upon Santa Comba securing debt funding, subject to a mineral reserve of at least 7,000 tonnes of contained WO3.

RFR will conduct 30 days of final due diligence before making a final decision, which shareholders will then vote on.

Rafaella Resources Executive Director Ashley Hood said, “The proposed deal is a transformative one for the company, which currently holds copper-cobalt and gold projects in Canada and Western Australia. I believe the project represents an attractive tungsten opportunity with low entry costs and the prospect of great returns for shareholders”.