The AEM survey will commence flying next week and should be completed in early March.

It is located approximately 20-170km north and northeast of Chalice Mining’s Gonneville PGE-Nickel-Copper discovery on the Julimar Project.

Chalice’s discovery was Australia’s first major palladium discovery, in an entirely new minerals province and is shaping up to be a major deposit of critical metals for a clean energy future and includes palladium, nickel and copper.

Since CHN’s discovery, PUR has taken up most of the ground in the province, leaving limited options for other companies to take a position and giving it the most leverage.

The aim of PUR's AEM survey is to find conductors due to massive sulphide PGE-Ni-Cu mineralisation associated with mafic and ultramafic intrusions.

These rock types host the PGE-Ni-Cu mineralisation at Chalice Mining’s Gonneville PGE-Ni-Cu deposit on their Julimar Project. Conductors associated with interpreted mafic and ultramafic intrusions will be prioritised for ground follow up and then drill testing.

Subject to concluding land access agreements, Pursuit is planning to undertake drill testing of priority targets during the second/third quarter 2021.

Utilising AEM surveys in this area has been done successfully by Chalice Mining, Caspin Resources Ltd (“Caspin”) and Devex Resources Ltd (“Devex”), and has assisted in identifying new targets for follow-up drilling.

“The commencement of flying the AEM survey over the prospective areas we have already identified on the Calingiri East, Calingiri West, Wubin and Wubin South exploration licences, will be a significant milestone for the Warrior Project and it demonstrates the rapid rate of progress we are making on the project.

"Being able to undertake such a critical part of the exploration process such as flying the AEM survey, two months after acquisition of the Warrior Project, shows how swiftly we are progressing the project towards our maiden drilling program.

"Once we obtain the data from the AEM survey, we will prioritise targets and our objective is to drill the best targets within the second or third quarter of this year. It is definitely full steam ahead on the Warrior Project.”

As we reported last year, the discovery of PGE-Ni-Cu mineralisation on the Julimar Project held by Chalice Mining Limited, is the first significant PGE-Ni-Cu discovery in the region.

It is becoming apparent that the prospective mafic-ultramafic intrusions which host Chalice Mining’s PGE-Ni-Cu mineralisation are far more widespread than previously thought throughout the western margin of the Yilgarn Craton.

The area of the Warrior Project remains poorly explored for PGE-Ni-Cu mineralisation due to the lack of outcrop, predominance of farmland and the prior focus of exploration companies on bauxite and iron.

Pursuit will fly detailed airborne EM survey blocks over the Calingiri East, Calingiri West, Wubin and Wubin South exploration licences on the Warrior PGE-Nickel-Copper Project, as detailed in the table below.

The airborne EM survey will commence next week and will be completed in early March. The survey blocks to be flown are shown in the below Figures. 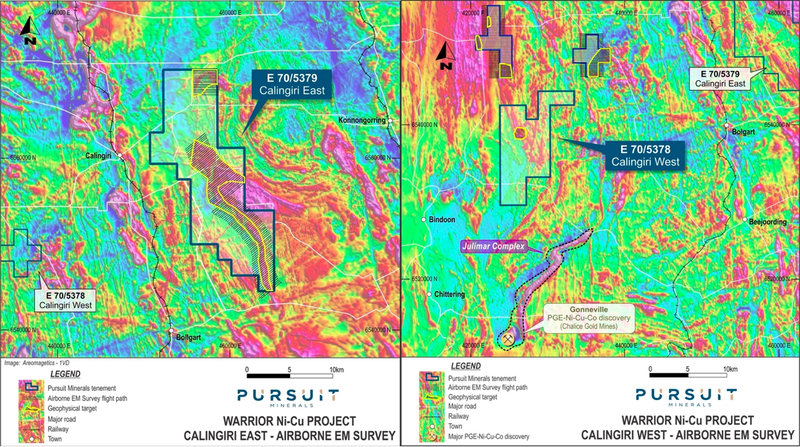 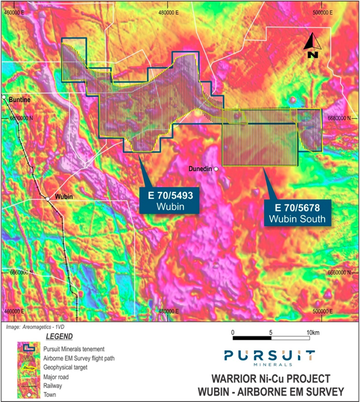 Ground follow up will involve a mix of soil geochemistry and potentially ground EM surveys to provide greater definition of interpreted conductors, although it may also be possible to target conductors directly from the airborne EM data. Whether Pursuit undertakes ground EM follow up of targets identified from the airborne EM survey will be made on a case-by-case basis.

Subsequent to the ground follow up of the conductors identified from the airborne EM survey, targets will be selected and prioritised for drill testing. It is anticipated that drill testing of priority targets will occur during the second or third quarter 2021.

Pursuit assures it will keep the market updated during the flying and subsequent follow up of the Warrior Project airborne EM survey.

Pursuit Minerals (ASX:PUR) is a mineral exploration and project development company that has acquired two highly prospective and complementary projects in Tier I jurisdictions in Western Australia.

The Warrior PGE-Nickel-Copper Project covers a series of prominent magnetic anomalies whose magnetic response is similar to the mafic and ultramafic Gonneville intrusion, which has the potential to be the most important deposit of palladium in Australia.

Exploration is underway at Warrior PGE-Ni-Cu Project, and new results suggest there is the potential for mafic-ultramafic intrusions equivalent to the Julimar Complex.

Additionally, a prominent belt of aeromagnetic anomalies over a 14-kilometre strike length on the Calingiri East tenement has the potential to host PGE-Ni-Cu mineralisation.

The company has also acquired the Gladiator Gold Project in Laverton, WA, which is currently undergoing geochemical surveys to define targets for drilling in early 2021.

PUR is well funded, with active exploration programmes planned in the first half of 2021, including EM surveys and drilling across its projects, potentially providing near term catalysts.