Whilst Pursuit Minerals (ASX:PUR) has been quiet lately, today’s news indicates the company is once again about to ramp up operations at its Paperbark and Bluebush Projects North Queensland’s Mt Isa Super Basin.

Pursuit is planning five drill holes for 1,325m for the Paperbark Project to further investigate the new zinc discovery at the JE Zone Prospect.

A second drill hole will test the down dip extent of surficial copper mineralisation at Grunter North and test for shallow extensions to the JB Zone Mineral Resource.

Three of the five hills drilled at Paperbark are set to determine the extent and grade of zinc sulphide mineralisation at the JE Zone.

Down the road at its Bluebush Project, Pursuit Minerals has lined up six holes for the north-west sector of Bluebush following confirmation that this area hosts enhanced grade sedimentary exhalative (SEDEX) style zinc mineralisation.

The goal of the Bluebush follow-up drilling, will be to determine if a globally significant SEDEX style zinc deposit occurs in the north-west sector of the Bluebush Project.

Bluebush is believed to host the largest zone of zinc mineralisation (>100km2) in Australia, with both projects in close proximity to the $490 million capped New Century Mine’s (ASX:NCZ) Century Zinc Mine.

Pursuit’s projects have the same SEDEX style mineralisation as that found at Century Mine.

Yet Pursuit has a long way to go to match New Century Mine and investors should seek professional financial advice before making an investment decision with regard to this stock.

Drilling is planned to commence at the Paperbark Project in late April, following the conclusion to the northern Australian wet season, with the drilling at Bluebush to commence immediately after.

The map below indicates the areas to be drilled. 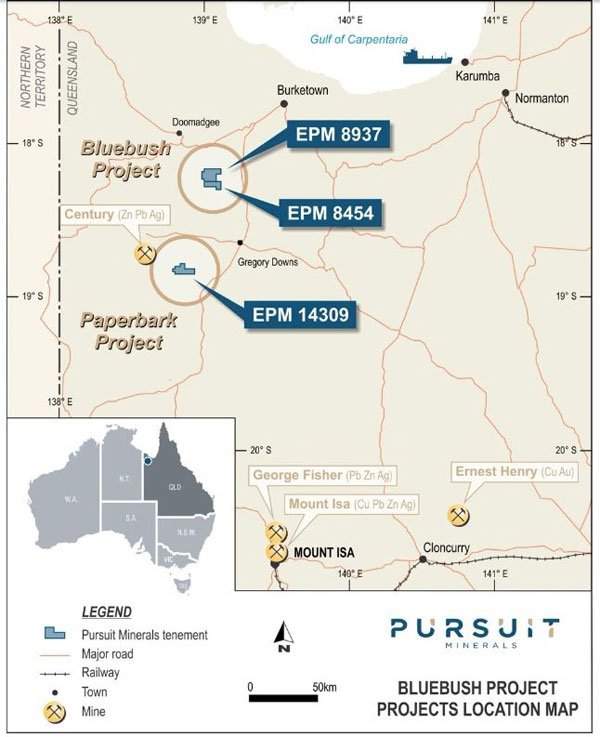 Pursuit Minerals Managing Director Jeremy Read said the company was now in a position to begin following up encouraging results from 2017 and will begin drilling as soon as possible to determine the full potential of both projects.

“In 2017 we discovered a new zinc system at the JE Zone Prospect on the Paperbark Project and confirmed that the north-west sector of the Bluebush Project hosts significantly higher grade zinc mineralisation than occurs elsewhere within the 120km2of zinc mineralisation at Bluebush,” Mr Read said.

“To better determine the potential of the JE Zone at Paperbark we need to drill beneath the depth of oxidation and into the sulphide zone, so we can accurately determine the grade of this new zinc system.

“In the north-west sector of the huge Bluebush zinc system our 2018 drilling program is designed to determine if a globally significant zinc system is present in this area of enhanced grade zinc.

“As soon as the wet season completes and the ground dries out, we will roll in the drill rig,” Mr Read concluded.