Pursuit Minerals Limited (ASX:PUR) advised the market on Friday that drilling had been completed on the Bluebush Project and has now commenced on the Paperbark Project in north-west Queensland.

Having acquired zinc and copper projects in the heart of the Mt Isa Province, PUR is uniquely placed to deliver value as it seeks to discover world class deposits adjacent to existing regional infrastructure while also extracting value from its existing mineral resources.

The following map illustrates the relative proximity of its tenements to the region north of Mt Isa, a location that has yielded long life/high production projects such as the Century zinc and lead mine, which on its closure was one of the catalysts behind the recognised imminent contraction in global zinc supply. 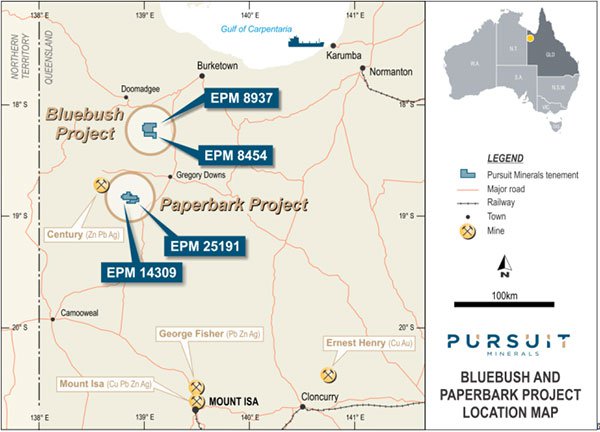 Given the substantial share price impact of PUR’s drilling campaign at Bluebush, results from the Paperbark result are likely to be keenly monitored. In just over a week, PUR’s share price has increased circa 20 per cent as results have been released from drilling conducted at Bluebush.

The company is planning to complete seven diamond drill holes for approximately 1500 metres at the Paperbark Project, testing targets prospective for copper and lead-zinc mineralisation at the Grunter North, JB, JE and Stonemouse Prospects.

The map below illustrates the area of focus for the drilling program relative to the Grunter North and Stonemouse prospect. 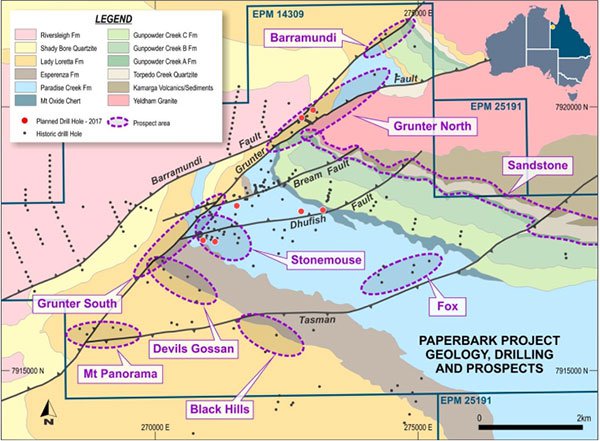 The first hole to be drilled has a planned depth of 550 metres and is aimed at testing an historical drill hole (JB006, 08) which intersected 6 metres grading 1.1 per cent copper, but wasn’t further investigated with follow up drilling.

This first hole will also investigate the potential southern extension of the JB Mineral Resource (Inferred Mineral Resource of 10.4 million tonnes grading 2.7 per cent zinc, 0.2 per cent lead and 1 gram per tonne silver at a zinc cut-off grade of 1.5per cent.

The second and third holes to be drilled at the Paperbark Project will investigate the source of surficial copper oxide mineralisation which forms a zone 900 metres in strike length where rock chip samples all exceeded 1 per cent copper.