Pursuit Minerals Limited (ASX:PUR) has today revealed that drilling at the JE Zone and Grunter North prospects at its Paperbark Project in north-west Queensland has intersected a new zinc mineral system.

Drill hole PB03-17 intersected strongly weathered rocks with iron oxides after sulphides and locally abundant zinc sulphides (sphalerite), from a depth of 116.0 metres to the end of the hole at 166.0 metres (downhole depth).

Further to that, hole PB03-17 was drilled to test the highest amplitude lead and zinc soil geochemical anomaly recorded to date on the Paperbark Project.

PUR managing director, Jeremy Read, said the result in drill hole PB03-17 was highly significant – although the rocks are strongly and deeply weathered, visible sphalerite and galena were recognised in the drill core, indicating that a new zinc mineral system has been located.

“Due to the deeper than usual weathering at the JE Zone, we need to undertake follow up drilling, so we can intersect the mineralisation at the JE Zone where the sulphides are fresh, allowing us to get an accurate determination of the grades of the zinc and lead mineralisation,” said Read.

“What we have seen in drill hole JB03-17 is extremely encouraging as we see indications of mineralisation over a downhole width of 50m, suggesting the JE Zone mineralisation has significant size potential.”

It should be noted here that PUR remains a speculative stock and investors should seek professional financial advice if considering this stock for their portfolio.

66 one-metre core samples have been submitted for geochemical analysis and results are expected in early December. Drilling to further investigate the mineralisation in hole PB03-17 will also be undertaken.

Drill hole PB02-17 was completed at the Grunter North prospect and 35 one-metre core samples have been submitted for geochemical analysis, with results anticipated by the end of November.

PUR’s Paperbark Project is located some 215 kilometres north‐northwest of Mount Isa and 25 kilometres south-east of the Century Mine in north-west Queensland. It occurs within the Lawn Hill Platform of the Western Succession of the Mt. Isa Province.

The project comprises two exploration permits (EPMs 14309 and 25191), spanning an area of around 110 square kilometres: 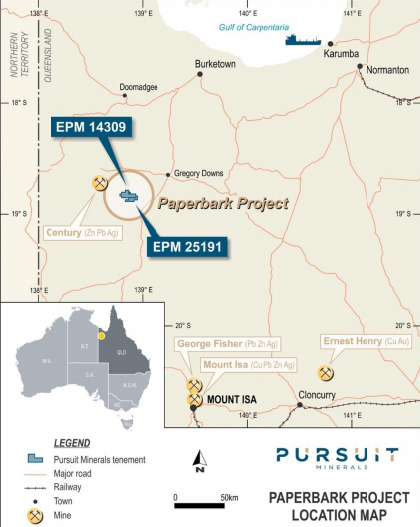 Previous exploration focused on the JB Zone, where a Mineral Resource of 10.4 million tonnes at 2.7 percent zinc, 0.2 percent lead, 1 gram per tonne silver at 1.5 percent zinc cut-off grade and classified as Inferred (JORC 2012), has been defined.

At Paperbark, Proterozoic basement rocks, members of the McNamara Group sediments, are well exposed. Geological mapping by previous tenement holders has contributed to a sound understanding of the distribution of the various geological units.

The Paperbark Project drilling program is underpinned by a number of objectives: