Microcap mining exploration group, Pure Minerals (ASX: PM1) has made one of the most stunning debuts of 2017. The revitalised group’s IPO price was 2 cents, and Friday, August 25 marked the three-week anniversary from commencement of trading.

On that day the company’s shares hit an intraday high of 3 cents per share, representing a 50% premium to the IPO price. There was strong interest in the stock in the latter part of last week as it surged 25%.

There was particularly strong buying activity on Friday with a record 64.8 million shares traded, and there was further strong support at this level when the market opened on Monday morning.

One would expect a steep premium to the IPO price to attract profit-taking from stag investors, but as evidenced in the chart below, retracements have been slight and importantly have occurred under low volumes relative to upward recoveries. 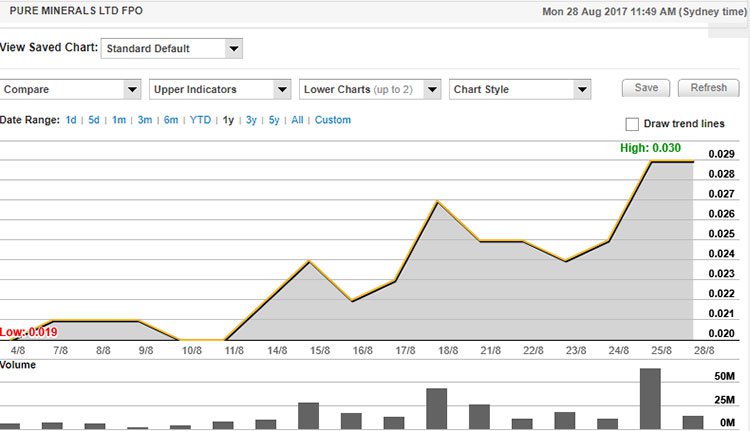 Interest in the stock appears to be driven by its exposure to highly favourable battery technology metals, especially manganese and electrolytic manganese. There is a school of thought that manganese batteries may become a dominant form of electric vehicle battery, but with all the hype surrounding graphite, lithium and cobalt, manganese has flown under the radar.

The market is currently attributing very little value to the company’s diversified range of assets which aside from manganese, covers regions prospective for lithium, tantalum, copper, uranium and gold.

PM1’s market capitalisation is circa $7 million, and the company has cash of $4 million, indicating that the market is valuing the company’s assets at $3 million.

Management has identified a movement towards utilising cheaper input materials in lithium battery manufacture and energy storage technology. End users in electric vehicles, utilities and technology sectors are actively developing next generation of batteries containing manganese as a key ingredient.

Among those companies recently cited by PM1 were Tesla and BMW in the auto sector, Siemens and General Electric in the utilities/energy sector and Samsung and LG Chem in the technology sector. 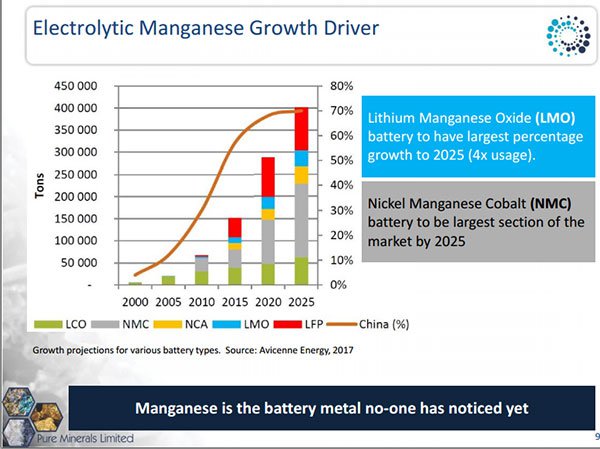 Of course, manganese will retain its position as a major input in steel production which currently accounts for circa 85% of demand.

US Geological Survey (USGS) noted in 2016 that the US was 100% import reliant on 19 commodities including rare earths, manganese and bauxite which are among a suite of materials designated as ‘critical’ or ‘strategic’ because they are essential to the economy and their supply may be disrupted.

Manganese supply is particularly prone to disruption because nearly 80% of the metal is produced in South Africa, a region that carries a high degree of sovereign risk. A further 10% is sourced from the Ukraine. 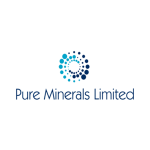