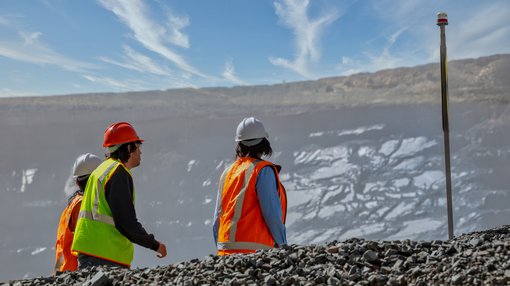 The AEM survey is expected to be completed in early March.

Interpretation of preliminary AEM data from the Calingiri East exploration licence has identified the new targets.

The AEM conductors are associated with magnetic anomalies which are interpreted to be due to mafic or ultramafic intrusive rocks, which are known to host the PGE-Ni-Cu sulphide mineralisation at the Gonneville intrusion on Chalice Mining Limited’s Julimar PGE-Ni-Cu Project. 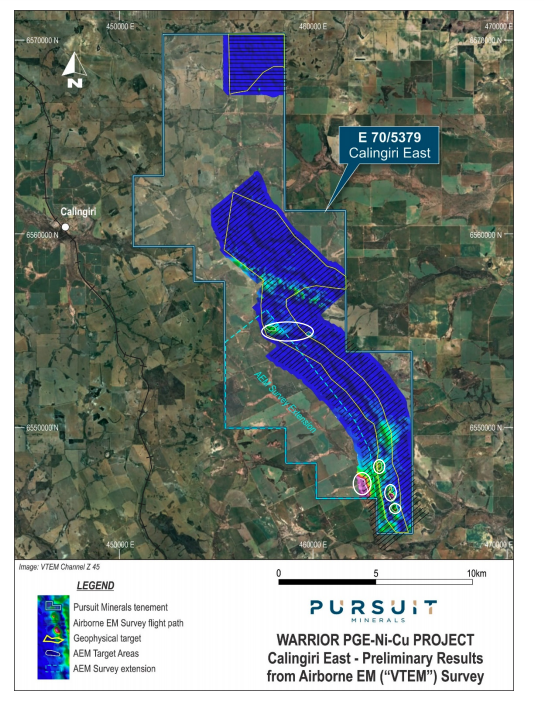 The five EM conductors are highlighted in white.

“The PGE-Ni-Cu targets which have been recognised from the preliminary data from the Calingiri East AEM survey block, demonstrate how the application of AEM surveys to PGE-Ni-Cu exploration can rapidly advance a project and generate highly prospective targets for drill testing,” PUR MD Mark Freeman, said.

“To have defined focused quality targets from the preliminary data is very encouraging and we look forward to identifying further targets from the remainder of the Warrior AEM survey and then drill testing the highest priority targets as soon as practicable.” 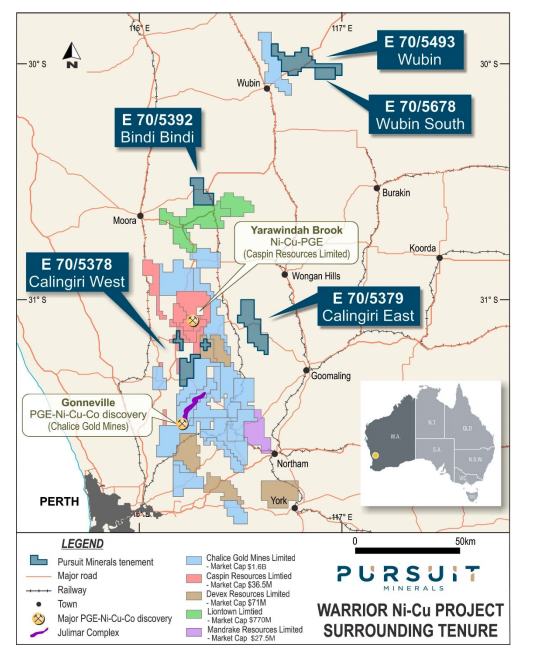 Is PUR holding a golden Chalice?

Chalice’s discovery was Australia’s first major palladium discovery, in an entirely new minerals province. However, PUR has now taken up most of the ground in the province, leaving limited options for other companies to take a position and giving it the most leverage.

With the prospective mafic-ultramafic intrusions, which host Chalice Mining’s PGE-Ni-Cu mineralisation, more widespread than previously thought, PUR’s position could prove to be strong one long-term.

Intrusions are spread throughout the western margin of the Yilgarn Craton and appear to be present at Calingiri East.

Chalice Mining’s success demonstrates that the exploration approach of identifying prospective mafic-ultramafic intrusions from aeromagnetic data and then generating drill targets from EM surveys, is an effective method for targeting PGE-Ni-Cu sulphide mineralisation within the West Yilgarn province.

The company will prioritise conductors associated with magnetic anomalies, interpreted to be due to mafic and ultramafic intrusions for ground follow up.

The Warrior AEM survey is currently ongoing and is expected to be completed before the end February 2021.

Fully processed AEM data will be delivered by mid-April.

A full interpretation of the AEM data will follow as PUR looks to generate targets for ground EM follow up.

PUR intends to test its highest priority PGE-Ni-Cu targets during the second or third quarter 2021.

Pursuit builds on Wubin South and opens up gold prospectivity