These extensive widths were also encountered in the first hole which supported management’s belief that the Bluebush deposit was a major SEDEX style zinc-lead system.

Bluebush along with the Paperbark and Coober Pedy projects were acquired from Tech Australia. Both Bluebush and Paperbark are located within the Bluebush Basin in the Mt Isa region of Queensland, which is classified as a second-order sub-basin analogous to the sedimentary basin at the Century Zinc Mine, where zinc mineralisation extends over an area of 120 square kilometres.

Bluebush consists of two exploration permits covering an area of 214 square kilometres. As indicated below, the third drill hole was looking to test for the formation of a SEDEX style mineralisation zone in the north-east quadrant of an intersection between the Boga and V8 faults. 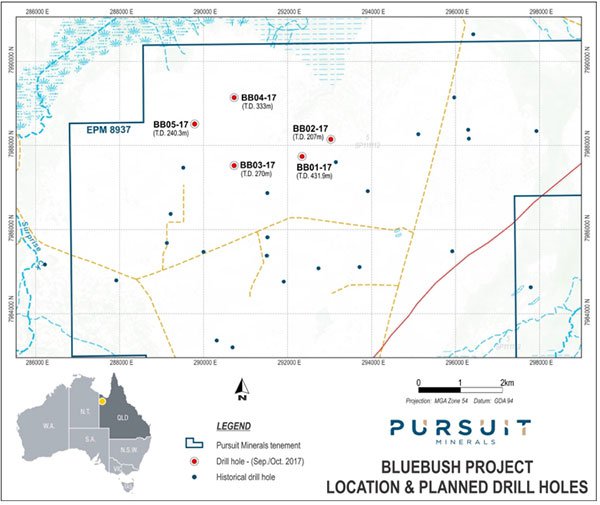 This hole is interpreted to be positioned in the same sub-basin as an historical drill hole which returned 11 metres grading 2.3 per cent zinc and 0.1 per cent lead.

Drilling operational issues prevented sampling of a 12 metre interval of the third drill hole from the basement interface at 163 metres until 175 metres downhole depth. Consequently, the zinc and lead mineralisation intersected could be up to 12 metres thicker.

From a broader perspective, and also taking into account historical data, highly significant zinc and lead mineralisation has now been intersected along and across a strike distance of 1400 metres.

Importantly, the higher grade mineralisation delineated in the third hole suggests that exploration closer to the Boga Fault Zone could unveil a source of high-grade ore.

In referring to the geological trends that exist in that region, management said, “World-class zinc ore bodies at Century and McArthur River both have fault controlled mineralisation, similar to what was intersected in drill hole BB04-17 (see above), up sequence, but in close proximity to the main orebodies”.

These two important outcomes from holes BB03-17 and BB04-17, and the fact that the Boga Fault Zone has been confirmed as an important structure in controlling the higher-grade zinc and lead mineralisation at Bluebush, have significantly advanced management’s understanding of the zinc mineralisation across the entire Bluebush sub-basin.

Furthermore, the drilling completed in 2017 at Bluebush has allowed PUR to define a clear focus for follow up drilling to be completed in 2018, which will aim to determine if a major zinc deposit occurs between, and in close proximity to, drill holes BB03-17 and BB04-17.