In choosing my stock of the week in a volatile market I looked at some of the action across different stocks and sectors to get a feel for where there was some resilience.

From a stock specific perspective it was the likes of Rio Tinto (ASX:RIO), BHP Billiton (ASX:BHP) and Fortescue Metals Group (ASX:FMG) that were largely instrumental in pulling the ASX 200 back into the black from a 100 point deficit on Wednesday.

Once again, those stocks showed resilience in the face of a 1% decline in the broader market on Thursday.

One factor they have in common is their exposure to iron ore, the metal that has experienced strong commodity price accretion in the last week particularly.

Making iron ore even more attractive is the emerging trade war with China which has the potential to significantly impact our agricultural industry, and from a mining perspective coal has the most exposure.

China can’t do without our iron ore because of the lack of domestic production, whereas it is fairly rich in thermal coal and produces a reasonable amount of coking coal.

But this week I’m not touting the prospects of iron ore stocks, but identifying a company that generates a substantial amount of revenue from servicing the likes of Rio and FMG.

Particularly impressive has been the company’s ability to do more than just pick and shovel work.

This company has presented state-of-the-art technical solutions for the processing of iron ore that have added significant value to iron ore projects in the Pilbara, particularly those operated by FMG.

The company is Primero Group Ltd (ASX:PGX), and here is an example of its technology. 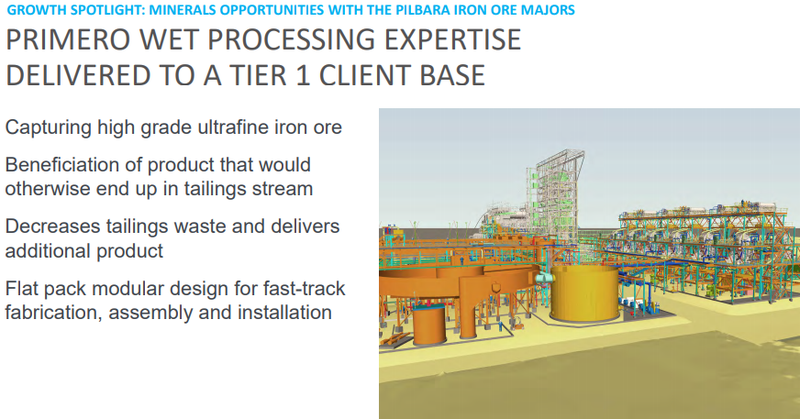 Being able to provide tailored solutions for blue-chip players sets the likes of Primero apart from what is sometimes are fairly crowded space with contractors often scurrying for work and accepting low margins.

The group provided a complete end to end solution that included a wet iron ore beneficiation plant, enabling the processing and upgrading of fines material from the Christmas Creek 2 ore processing facility.

Works are in progress and at its peak, Primero will have approximately 150 personnel on-site.

Based on Primero’s fiscal 2020 order book of $195 million, iron ore projects should account for approximately 50% of revenues.

The company has already generated $112 million in the first half of fiscal 2020, and the projects it has been working on haven’t been unduly affected by coronavirus related shutdowns.

Management provided an update on Tuesday of this week which is helpful for potential investors who are wondering what other stocks will come out of the woodwork with earnings downgrades because of coronavirus related interruptions.

Primero’s managing director, Cameron Henry addressed this issue, reaffirming that the company was operating at a run rate consistent with its fiscal 2020 contracted order book guidance of approximately $195 million.

Further, he was able to inform the market that there had been no major reduction scope or contracted works volumes for the projects in hand.

Providing further medium-term revenue visibility, he said that the contracted order book for fiscal 2021 currently stood at $200 million with scope for further growth in contracted work, including that already booked for fiscal 2022.

Management has a track record of under-promising and outperforming, and it is evident from the following charts that Primero has demonstrated its ability to generate significant growth.

Management’s achievements shouldn’t come as a surprise given the experience within the group.

Of particular note is the actual site experience of the chairman and the managing director.

Non-executive chairman, Mark Connelly is one of the most sought after figures for companies that are looking to build a project from the ground up.

Connelly has managed some of the world’s most prominent projects, and he has successfully negotiated challenges presented in sovereign risk regions.

Previously, he was Chief Operating Officer of Endeavour Mining Corporation following the merger of Adamus Resources Limited where he was the Managing Director and CEO.

Connelly is a director of West African Resources (ASX:WAF), one of the fastest-growing junior gold developers on the ASX.

Since the start of 2019, its shares have increased four-fold, largely due to its quick progression from explorer to the pouring of first gold in March this year.

Consequently, Connelly’s expertise is highly sought after by mining companies that are undertaking large projects, a big plus for Primero.

Cameron Henry also has extensive experience in managing developments on-site, meaning the company is well-positioned to make decisions on industry knowledge rather than boardroom semantics.

Leading up to the onset of coronavirus, it could be said that investors view the company positively with its shares hovering in the vicinity of 40 cents.

However, they are now trading in the vicinity of 25 cents despite any change in the company’s inherent value.

In fact, consensus forecasts which were updated post the coronavirus sell-off attributed a valuation of 54 cents to the stock.

With regard to the company’s financials, Primero had available cash of $19 million as at May 8, 2020.

Broker forecasts for fiscal 2020 are based on the company generating revenues of $207,000, broadly in line with management’s guidance.

Based on these metrics, the analyst expects Primero to generate a net profit of $6.6 million, representing earnings per share of 4.1 cents.

This implies a PE multiple of 6 based on the company’s current share price, extremely conservative given the status of its current operational and financial position.

It looks even more enticing when considering broker forecasts for fiscal 2021 which are projecting a net profit of $8.5 million, representing earnings per share of 5 cents (year-on-year growth of 22%) and a forward PE multiple of 5.