MinRex Resources Limited (ASX:MRR) has delivered an update on its current pre-acquisition due diligence for three cobalt-scandium-nickel projects in NSW and WA being undertaken by a geology consultant.

Due diligence work by the geology team on the Pacific Express project in NSW is now focused on six prospective areas for high-grade cobalt-scandium mineralisation. Proving up the region’s prospectivity for cobalt-scandium mineralisation, further desktop work has uncovered a 159ppm scandium assay within the now granted NSW tenement as well as a 13,200ppm cobalt assay 2.5 kilometres to the east.

MRR is also undertaking desktop work on the Knight and Dragon projects in WA, and indicated that it expects to release a preliminary report on these findings in the near-term.

Today’s update from the company focuses on the promising Pacific Express project in NSW, wherein it has identified six key prospects in the project boundary, as shown below: 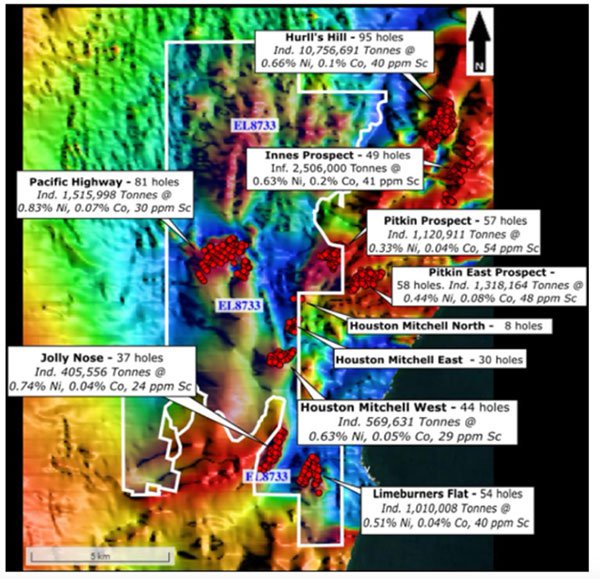 Reconciling legacy drilling data with geophysical aero-magnetic images across the project (from Geological Survey NSW) has confirmed and extended the six areas. The key target, the Pacific Highway prospect, has a legacy Indicated Resource (1.52Mt at 0.83% nickel, 0.07% cobalt and 30ppm scandium) which was determined by historic JORC (1996) Resources completed under Jervois Mining.

MRR’s geology team is reviewing the legacy drilling data for all six high-priority areas, re-orienting the focus on cobalt-scandium mineralisation (from nickel) with the findings intended to contribute to the development of an upcoming drilling program.

This was determined through MRR’s current process which leverages existing legacy data from 15-20 years ago. That data was gathered via 506 drill holes over an enlarged area which included the Pacific Express tenement.

This resulted in the reporting of a historical total Resource reported to the JORC (1996) code of 19.2Mt at 0.63% nickel, 0.10% cobalt and 40g/t scandium. Of the six highly prospective areas now identified, the Pacific Highway prospect is the most significant — with proven mineralisation defined by 81 drill holes, it is the standout candidate for closer scrutiny at this stage.

Further, the 81 drill holes did not cover the extent of the underlying magnetic anomaly, which means the mineralisation remains open. There is potential, therefore, for the prospect to be expanded in future through exploratory drilling.

Building a new model for exploration at Pacific Express

Following settlement, MRR’s geology team will then be able to commence building a geological model with the primary aim of estimating a JORC 2012 Resource relating to cobalt and scandium mineralisation at Pacific Express. It should be noted that this plan may not materialise if the legacy data proves inadequate.

Historic reporting from the area focused on nickel, and as such, cobalt and scandium rich horizons were largely overlooked. This provides an obvious opportunity for MRR in its exploration efforts at the site now.

MinRex Executive Director, Simon Durack commented on today’s update: “The geology team has made solid inroads with the due diligence process, which has significantly aided the Board’s understanding of the Pacific Express project and highlighted the potential exploration upside for cobalt and scandium mineralization.

“Moving forward, the Board looks forward to receiving preliminary geological views on the WA projects and final desktop review on the Pacific Express tenement,” he said.

Next steps for MRR

Beyond the NSW projects, MRR is conducting a desktop review of the two WA projects, the Knight and Dragon projects, and expects to release a preliminary report as soon as possible.