PolarX Limited (ASX:PXX) has announced wider, locally high-grade intersections of gold and copper at its Zackly East prospect within its Alaska Range Project.

It sits immediately adjacent to the Zackly Main skarn deposit, where the JORC Inferred Resource currently stands at 213,000oz of gold, 41,000t of copper and 1.5Moz silver.

It has been a solid couple of months for PXX.

PXX is clearly onto something, with the positive news continuing.

The highlight of today’s announcement is that Zackly East continues to grow with 69m near-surface intercept hosting 11.2m @ 2.5 g/t gold and 1.1% copper.

These results are all outside the existing JORC Resource estimate.

Assays are now pending for a further 17 holes.

Below you can see the sum of assays to date: 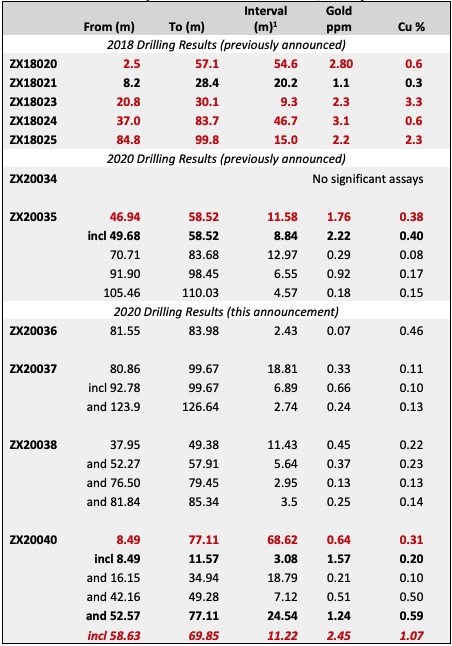 PolarX Managing Director Dr Frazer Tabeart said Zackly East was continuing to grow to the east and remained open in all directions.

“Our most recent drilling has been to the east and north of these results. This again revealed strong skarn alteration in structures associated with very strong magnetic gradients. The high-grade mineralisation at the Zackly Main skarn is also associated with a similar magnetic gradient so further growth in mineralised strike is expected on receiving those assays. At least 2km of these newly identified structures remain untested to the north and east of current drilling these are now high priority drilling targets. We have also observed features in the new magnetic data consistent with a nearby porphyry target, which also remains untested.”

While mineralisation at the Zackly Main Skarn deposit is spatially associated with a structure running along a strong magnetic gradient, it also appears to be spatially related to such structures.

Drill holes ZX20050, ZX20053 and ZX20056 all tested a strong magnetic gradient ~150m to the north of that which hosts the known mineralisation at Zackly East.

Intense skarn alteration (assays pending) was observed in all three holes and further drilling to test eastwards extension of this structure will be carried out, along with a similar structure a further 100m to the north.

Over 2km of strike-length remains untested.

In addition to these structures, the recently acquired ultra-high-resolution magnetic data has highlighted a potential porphyry target to the north and east of current drilling, in which a magnetic high is surrounded by a magnetic low, producing an “eye” structure consistent with geophysical models of porphyry style mineralisation.

This is a high priority target for PXX and has never been drilled. The company will follow up shortly.