PolarX Limited (ASX:PXX) is planning a scoping study at its Zackly gold-copper-silver project in Alaska.

The preliminary study will assess the key economics, including costs, tonnages and recoveries and take into account Zackly Main, Zackly East and Caribou Dome.

The decision follows the receipt of final drilling results from Zackly East with the final batch of results further confirming the conclusions reported in December that 4 kilometres of strongly magnetic structures at Zackly East are a high priority for further drilling as they are either known to be strongly mineralised, or have the same structure as that which hosts the known mineralisation.

From a geological perspective, skarn deposits such as Zackly are often found associated with or close to large porphyry deposits.

Further work is required to assess the porphyry potential of the Stellar Property, but of considerable note is the porphyry mineralisation discovered in drilling at Mars in 2019 (102m @ 0.22% Cu, 0.1g/t Au) which remains open in all directions and requires further drilling.

Additional porphyry targets at Jupiter and Gemini were identified by previous project owners through soil sampling and rock-chip sampling but have never been drilled.

These targets are shown below, and it is interesting to note their close proximity to the Zackly Resource. 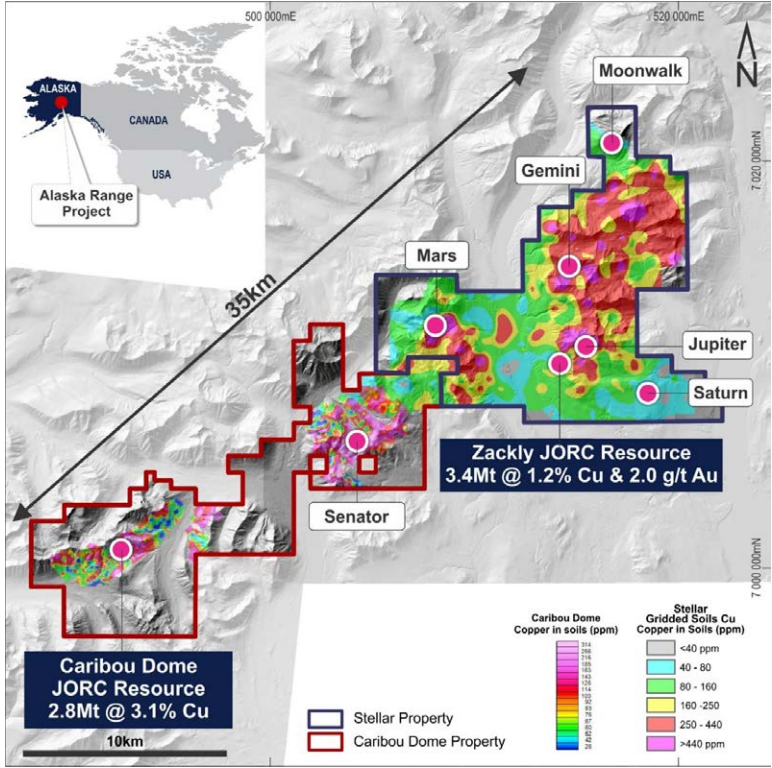 A scoping study based on Zackly Main, Zackly East and Caribou Dome will provide valuable information regarding project economics.

Drilling has identified mineralisation along 2.5 kilometres of strike-length since work commenced at Zackly in 1981, predominantly along a series of strongly magnetic structures.

Drilling density in the western one kilometre section of the system is sufficient to formulate a JORC resource as outlined below.

Drilling further to the east, over another 1.5 kilometres of strike-length intersected mineralisation in most holes, but drill density is not yet sufficient for resource modelling.

PolarX has commenced the following work programs to advance Zackly to evaluate its economic viability, either as a stand-alone project, or in some form of combined operation with Caribou Dome.

It is worth noting that over 2.6 kilometres of strike-length remains untested at Zackly East, and Zackly Main remains open at depth.

In addition to the Zackly skarn mineralisation, the recently acquired ultra-high-resolution magnetic data has highlighted a potential porphyry target to the north and east of current drilling, in which a magnetic high is surrounded by a magnetic low, producing an “eye” structure consistent with geophysical models of porphyry-style mineralisation.

This target as shown below has never been drilled and is a high priority for follow-up. 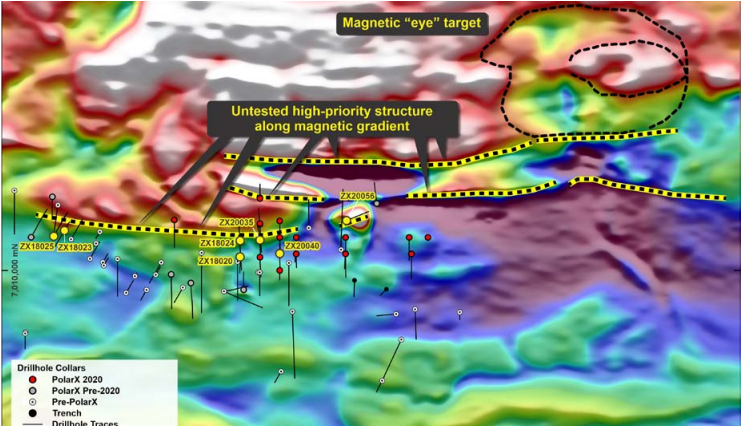 In terms of funding upcoming exploration activities, management is still pursuing farm-out opportunities for its major copper-gold porphyry exploration plans and it expects this to accelerate as COVID-19 restrictions ease and vaccination programs take effect.

What could be of significance in terms of generating interest in a farm-out venture is more evidence of porphyry presence, including the Mars drill intersection (102 metres at 0.22% Cu + 0.1g/t Au), and it is worth noting that this has been demonstrated since the previous farm-out arrangement was negotiated.