In a promising development for PolarX Limited (ASX:PXX), the company has confirmed that its new drilling program at the Zackly East prospect within its Alaska Range Project has extended the known gold-copper mineralisation a further 320 metres along strike with visible gold noted in three drill holes.

This means mineralisation at Zackly East has now been outlined over 900 metres with a further 300 metres to the east still to be tested as part of the current drilling program.

Assays from the first hole were particularly impressive, featuring 11.6 metres at 1.8 grams per tonne gold and 0.4% copper from 47 metres.

Another significant intersection of 8.8 metres with gold grading 2.2 grams per tonne and copper of 0.4% was delineated at a similar depth.

It is worth noting that this hole lies 60 metres to the east of wide high-grade discovery intersections featuring gold grades of 2.8 g/t and 3.1 g/t, along with copper mineralisation as illustrated below (55 metres and 47 metres respectively). 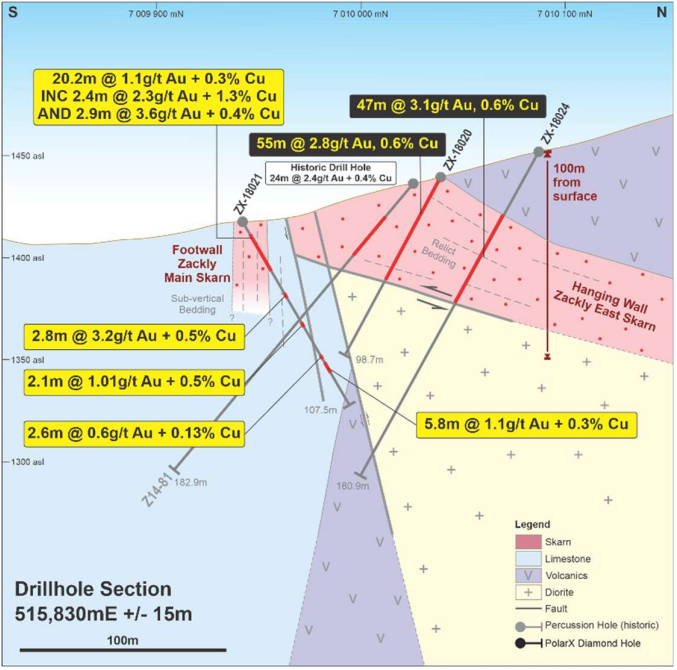 “When the rapidly growing size of Zackly East is combined with the significant open-ended Resource nearby at Zackly Main, it is clear that we have a strong project with immense potential on our hands.

“And this is before any allowance is made for the copper-gold porphyry potential at depth.”

Value of in-ground resource not reflected in market capitalisation

Zackly East was discovered by PolarX in 2018, and it sits immediately adjacent to the Zackly Main skarn deposit where the JORC Inferred Resource stands at 213,000 ounces of gold, 41,000 tonnes of copper and 1.5 million ounces of silver.

As illustrated below, the Zackly skarn system occurs within the company’s Alaska Range Project, comprising the Caribou Dome Property and the 100% owned Stellar Property. 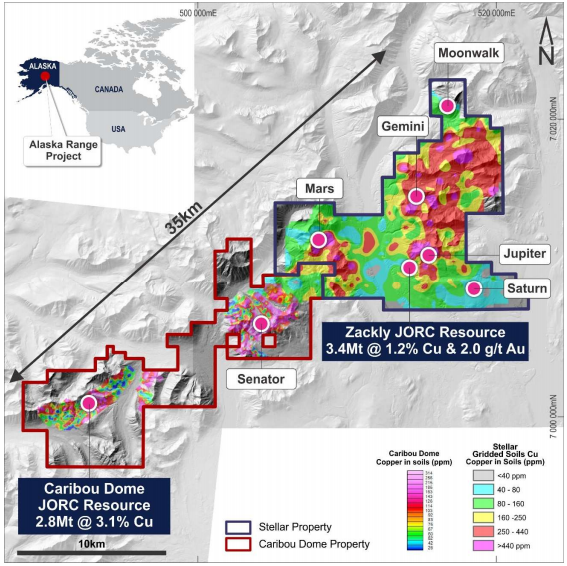 Zackly occurs on the southern edge of an extensive copper in soils geochemical anomaly, within which are several targets for porphyry copper-gold (note targets Mars, Saturn, Gemini, Jupiter).

Skarn deposits such as Zackly are often found associated with or close to large porphyry deposits.

Further work is required to assess the porphyry potential of the Stellar Property, but of considerable significance is the porphyry mineralisation discovered in drilling at Mars in 2019.

This yielded 102 metres at 0.22% copper and 0.1 g/t gold, and it remains open in all directions with management intending to conduct further drilling.

An ultra-high-resolution drone magnetic survey on a 12.5 metre line-spacing has been completed over the entire Zackly system, covering an area of approximately 3.5 kilometres by 1.5 kilometres.

Mineralisation in the entire Zackly system is broadly coincident with a strong magnetic gradient running approximately east-west along the axis of the project.

Using this new magnetic data, additional lines of drilling have been planned to evaluate untested targets both east and west of the drilling completed to date, and the following graphic indicates the upcoming program. 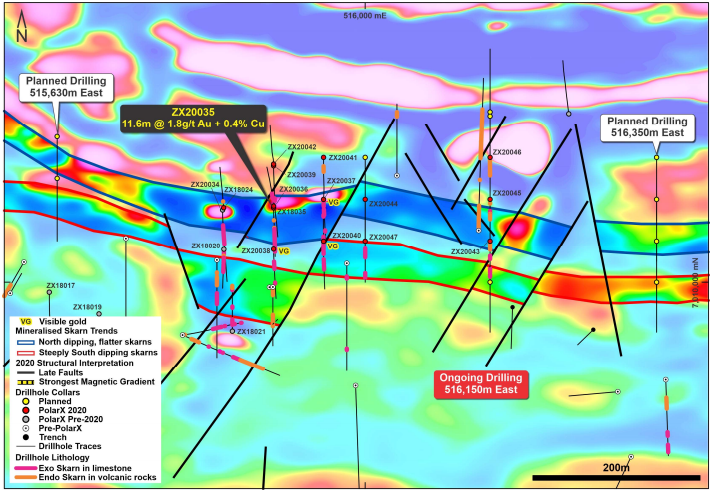 This will cover approximately 750 metres of strike length at Zackly East, and 3D inversion modelling of the new magnetic data is underway.

Integration of the 2D and 3D magnetic models is expected to underpin further refinement of target generation at Zackly and is expected to lead to more drill targets.

Consequently, PolarX is shaping up as a news-driven story over the coming months.