PolarX confirms there is life on Mars

PolarX Limited (ASX:PXX) has provided a promising update on the single diamond drill hole completed into the Mars porphyry target within its Alaska Range Project.

The Mars porphyry target occurs in the Stellar Project, an area subject to the strategic partnership with global mining group, Lundin Mining Corporation.

Mars occurs at the western end of a 12 kilometre long mineralised corridor which also hosts the high‐grade Zackly copper-gold skarn and the Saturn porphyry target.

A single angled hole to a final down‐hole depth of 417 metres has been drilled into the Mars target by PolarX.

The hole was stopped whilst still in mineralisation in heavily broken ground which coincided with increasingly heavy snow falls necessitating the termination of the drilling program.

It was just at the start of October that Finfeed underlined the nature of a preliminary program of core drilling to evaluate Saturn and Mars, an initiative that was undertaken in August and September.

At that stage we noted that initial results of the core drilling program designed to evaluate the Saturn and Mars porphyry targets within its Alaska Range Project had provided evidence supporting management’s expectations that a deeper porphyry source may be present at the prospect. 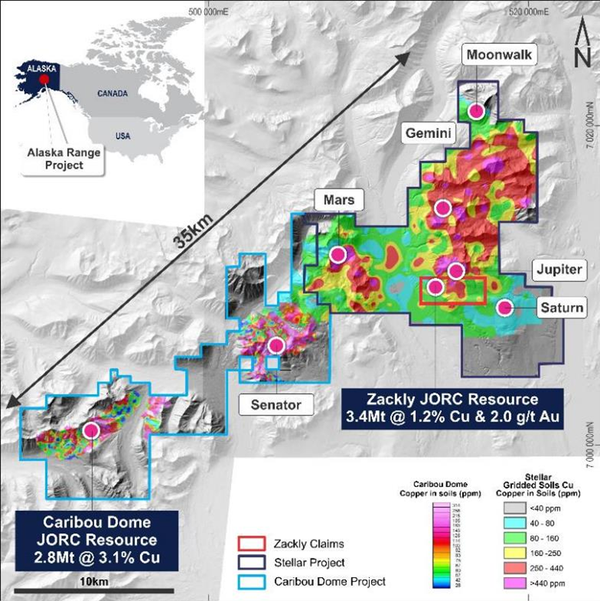 While acknowledging at the start of October that further work needed to be done to combine a range of geological information to confirm current consensus of a deeper porphyry system, managing director Frazer Tabeart highlighted the significance of the upcoming developments in saying, “Visual confirmation of porphyry-style veins containing chalcopyrite and molybdenite in the first hole at Mars is extremely encouraging.

‘’Given the large size of the coincident copper-gold-molybdenum geochemical anomaly and the geophysical anomalies at Mars, this has the potential to be a very large mineralised system and clearly warrants considerable follow-up drilling.”

Speaking with greater confidence on Monday morning, Tabeart said, “Visual confirmation of even more intense porphyry‐style veining containing chalcopyrite and molybdenite from 321 metres to the end of the first hole at 417 metres depth at Mars is extremely promising.

‘’The 400 metres+ down‐hole thickness of mineralisation, the large size of the copper‐gold‐molybdenum surface geochemical and geophysical anomalies at Mars support our view that a very large mineralised system may be present.”

While further drilling is required to make definitive statements regarding the orebody, there are some important key takeaways to be noted that suggest PolarX may be onto something big.

Firstly, mineralised porphyry‐style veins occur from within 6 metres of the surface to the end of the hole at 417 metres down‐hole depth.

Providing further confidence, the mineralisation intensity broadly increases with down-hole depth, but quite noticeably increases at 321 metres to the end of the hole with abundances of chalcopyrite visually estimated at between 0.5% and 2.0% within this interval. 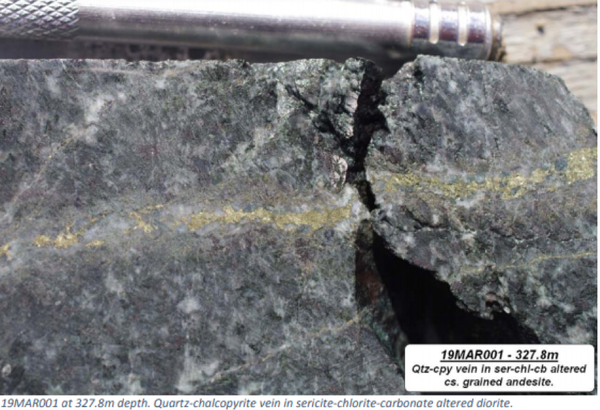 Taking these factors into account, there could be a continuation of last week’s positive share price activity, particularly given assays for base and precious metals are expected in November.