PNR On Target For Q3 Production At Halls Creek

This is a crucial step for PNR, which wants to use the project to become strongly cash flow positive to help fund production growth in WA and further afield.

At PNR’s main exploration project in Papua New Guinea, the Garaina Project, exploration work had been farmed out to MGL Limited until recently. After MGL spending $3M, PNR terminated the MGL partnership as that company had run out of funding options.

PNR retains a 100% interest in the project, and is now in discussions with several other parties to advance the project, which could be valued at many multiples of the company’s market cap if further exploration is successful.

Halls Creek project up and running

PNR has carried out a campaign of diamond drilling of 11 holes at its Halls Creek project, which confirmed a narrower but higher grade mineralisation than worked up by previous reverse circulation (RC) drilling. 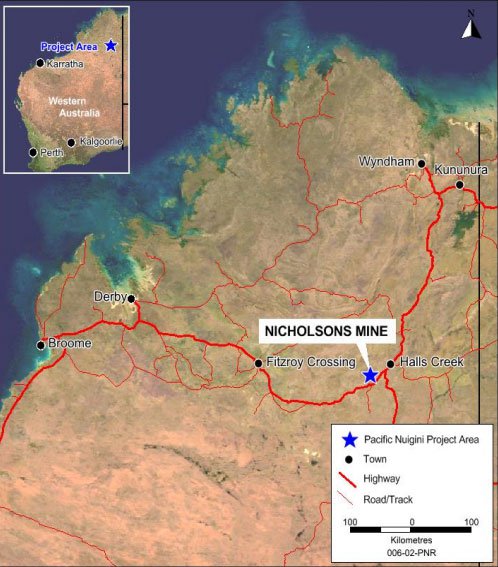 With the project being fully financed and having received the necessary approval, production is now expected to commence by the beginning of Q3 this year.

The Nicholson Mine sits between Halls Creek and Fitzroy Crossing and has a high grade resource and reserve and sits below an existing open pit.

The position of the site is advantageous because there’s already a complete processing plant built and other infrastructure either in place or being refurbished.

Another plus for the Nicolsons site is that the project has low capital to get up and running, with a feasibility study pointing to capital costs of just over $10M.

The company is expecting production costs of A$850/oz, and with the facility already fully financed and a gold pre-pay facility with the Commonwealth Bank of Australia, and all DMP and DER (Department of Environmental Regulation) approvals lined up, the site is ready for first production in the third quarter of this year.

Regarding ownership of the project, 80% is now held by PNR, with a 20% equity owner also contributing to their share of costs.

Positive finances on the cards

PNR says its finances are looking positive for the future, and once the project is underway expects to see positive cash flow in just six months with annual production forecast to hit 130,000t and 30,000oz.

With a mine life set at four and a half years, including the six months of construction, PNR says that if all goes to plan it wants expand the project.

At the moment, major processing equipment at the site has been sent down to Perth for refurbishment and due back on site during May. All major components have been ordered and works are progressing in line with schedule.

PNR’s project is ideally situated at Halls Creek because most of the infrastructure in the area is ready to go, and the site is also close to the Great Northern Highway.

On track to drill

PNR’s Nicholsons Project was acquired just one year ago and already a significant amount of diamond drilling (DD) has been completed. Drilling demonstrated exceptionally high grades in the areas pinned for initial mining.

Along with diamond drilling, the mine feasibility and re-start estimate assessments have also been completed.

Project financing is in place too, with the agreed terms for a gold pre-payment facility completed in December 2014 and carried out earlier this year.

In February, the civil works, mine remediation and plant refurbishment began at Nicolsons, meaning the first production is on track for the scheduled date of Q3 this year.

PNR’s first diamond drilling campaign at Nicolsons comprised 11 holes, for around 2,500m, and was completed to design, extend and validate a producing mine.

Overall, diamond drilling showed potential for site expansion and further high grade potential. In fact, PNR says the initial mine plan is only ‘a fraction of its potential’. 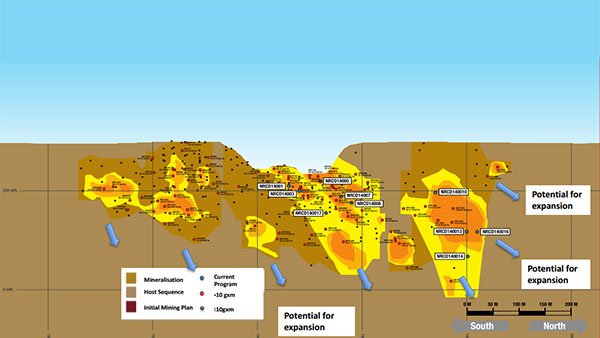 Historically there have been a number of high grade intercepts of +20g/t at sites nearby to Nicolsons, including Rowdies, Wagtail North and Wagtail South. These haven’t yet had diamond drilling actioned as yet and represent a potential growth option for the project.

Regardless of the amount of drilling conducted to date, multiple exploration targets have been identified with high-grade mineralisation, which was found in rock chip sampling and in drilling.

While the Halls Creek project moves forward, at PNR’s Papua New Guinea site, Garaina, the company has produced positive drilling results that are showing strong potential for the project.

Already at the site, PNR has confirmed significant epithermal gold and copper gold porphyry mineralisation on a classical transfer fault break through the Owen-Stanley Ranges.

Promising results from progress at Garaina so far

Back in 2011, PNR made a virgin discovery, where detailed magnetic surveys and petrology showed porphyry copper-gold potential at Garaina.

As indicated earlier, PNR recently terminated its farm-in agreement with MGL Limited at the Garaina site because it failed to meet its minimum requirements to earn interest for the project. PNR has kept its 100% interest in Garaina.

PNR is now on the hunt for another party interested to join it in the project.

While it seeks an interested party to join it in Papua New Guinea, PNR’s main focus will be on the successful development and operation of the Nicolsons Mine near Halls Creek in Western Australia.