The below map shows the location of the Five Fingers prospect. 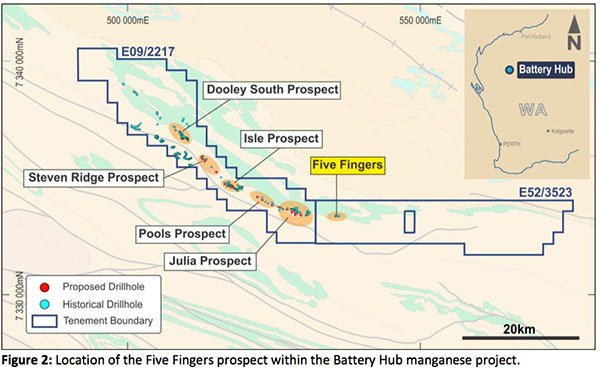 The below table shows the recent results in full.

Exploration at the Five Fingers prospect has indicated it contains multiple outcropping and subcropping manganiferous beds over a strike length of over five kilometres, however it has only been subject to limited drill testing so far. PM1 has confirmed that today’s results will see Five Fingers treated as a priority target as the company commences the upcoming drilling programme.

Regarding today’s news, Pure Minerals’ Executive Director and CEO, Sean Keenan said: “These surface results have identified multiple zones of manganese mineralisation at-surface, many with an enriched grade that is above the thresholds required for direct shipping operations. Five Fingers will be a priority target area once the Plan of Work has been approved and Native Heritage clearances have been attained.”

The company has now submitted to the WA Department of Mines, Industry Regulation and Safety (DMIRS) a plan of work to begin RC drilling within the Battery Hub project.