Shares in PolarX Limited (ASX:PXX) have surged in the first few weeks of January, responding positively to management’s acquisition of an exclusive option to acquire the rights to the Humboldt Range Gold-Silver Project in north-western Nevada.

Humboldt Range is situated between two large active precious metal mining operations, the Florida Canyon Mine (+5Moz gold) and the Rochester Mine (+400Moz silver/+3Moz gold), and the region is host to numerous small-scale historical mine workings which had ceased operations by 1927.

The project comprises two groups of lode claims, Black Canyon and Fourth of July, neither of which has been extensively explored using modern techniques.

Recent soil sampling in the area under option has yielded exceptional grades with isolated instances of more than 3000 g/t gold.

The following map shows the location of the claims and their relatively close proximity to large producing mines such as Florida Canyon and Rochester. 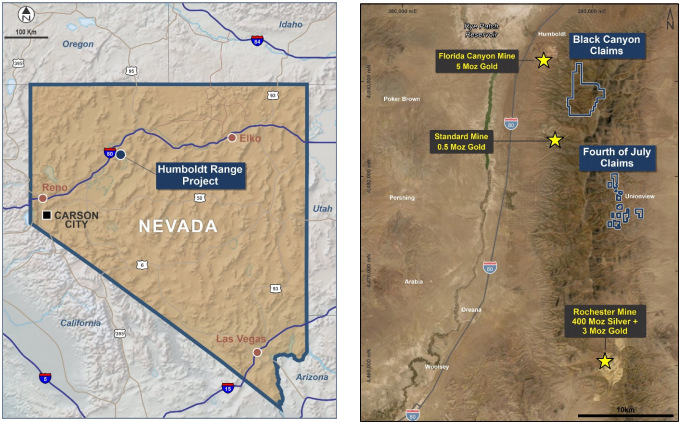 While there can be sporadic instances of outstanding grades when soil sampling is conducted, it is worth noting management’s comments regarding ‘’multiple samples’’ of bonanza grade gold, with managing director Frazer Tabeart saying, “Surface grades from rock-chip sampling and mine dumps at Humboldt Range are exceptionally high, with multiple samples exceeding 100 g/t gold along with high-grade silver, lead and zinc.

‘’It’s surrounded by large producing mines which shows the geology is conducive to significant modern-scale operations.

“Seasons in Nevada will allow us to work from April to December each year, enabling us to generate strong news flow virtually all year round, leveraging our current team, most of who live in relative proximity and are familiar with the region.”

Not only is PolarX poised to capitalise on a new exploration program in highly prospective territory, but the company also continues to build on progress made at its flagship Alaska Range Project which contains the Caribou Dome Project (PolarX: 80%) and the Stellar Project (PolarX: 100%).

Response to the potential Humboldt acquisition has been significant with the company’s shares surging 60% from their closing mark of 2.7 cents on 31 December 2020 to 4.3 cents in the last week.

It is important to note that the Humboldt Range transaction represents more than just a bolt-on asset.

PolarX has found it challenging in recent years to maintain investor interest during lengthy seasonal time lags at the Alaska Range Project.

It doesn’t matter how good the newsflow is leading up to December, investors are aware that as the snow starts to fall the drill bit stops turning for some three months.

At Humboldt Range, management will have the ability to continue exploration activity throughout most of the year, a factor that will also result in the company making better use of its physical and human resources as they can be deployed to both projects.

Investors also tend to warm to companies with dual assets as one can provide a buffer if challenges emerge at the other.

We will examine both the Alaskan project and PolarX’s prospects at Humboldt Range - but with the company having made good ground at the high-grade Caribou Dome VMS copper deposit in 2020, it is worth gaining an appreciation of what lies ahead in 2021 for the group’s flagship asset.

This is of particular significance at the moment with the copper price nudging eight-year highs and the gold price looking resilient at around US$1850 per ounce.

The following map shows the main deposits and prospects at the Stellar and Caribou Dome projects in central Alaska, as well as illustrating regional copper geochemistry in soil sampling. 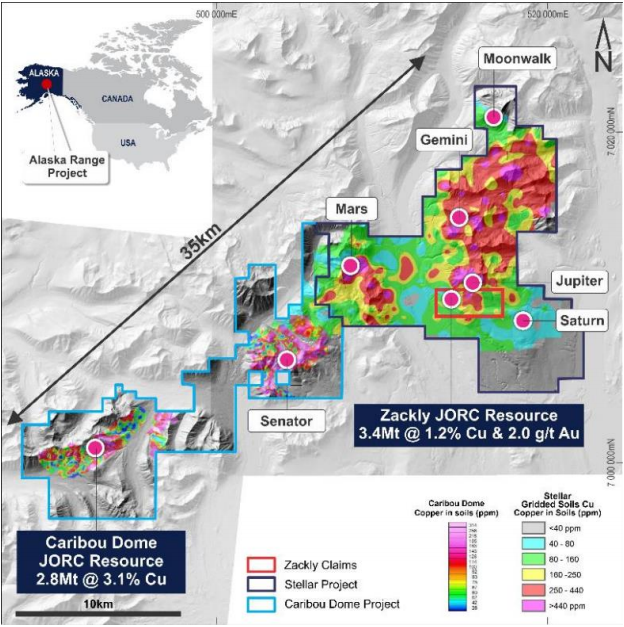 Both deposits remain open at depth and along strike and are likely to increase in size with further drilling.

As recently as 17 December the return of assay results culminated in a 200 metre extension of the Zackly East discovery with another two kilometres of similar geological structure still to be tested.

Importantly, there was continued evidence of nearby porphyry mineralisation, and the assay results featured some strong returns including 1.5 metres at 5 g/t gold and 3.1% copper.

The regional geological setting, presence of large copper anomalies in soil sampling, and the occurrence of skarn mineralisation at Zackly also support the potential presence of a major porphyry copper-gold deposit in the Stellar Project (outlined in black in above map).

Consequently, further drilling is warranted at the Mars and Saturn porphyry targets, with less advanced but highly compelling porphyry targets also noted at Jupiter and Gemini.

Management is seeking an earn-in JV partner to fund a large porphyry exploration program but will continue to fund its own resource expansion drilling at Zackly and Caribou Dome.

As well as offering the aforementioned strategic benefits, PolarX’s decision to secure the high-grade gold-silver Humboldt Range project comes at an ideal time.

Gold isn’t far off the all-time record highs that were struck in 2020, and at around US$25 per ounce, silver is sitting above the long-term average price, having doubled from about US$12 per ounce less than 12 months ago.

Limited geological data is available for the Humboldt Range claims, but management has gleaned some information from geologists who reported on behalf of Victoria Gold Corp who briefly evaluated the area between 2005 and 2009.

During this period, Victoria Gold Corp collected rock-chip samples from outcropping quartz veins and sampled mine dumps near many of the abandoned underground workings and adits.

A total of 227 samples were collected on the claims being reviewed by PolarX, and management has copies of the assay certificates for these samples

These have been compiled to form a database of results which assisted management in assessing the claims in late November 2020 when they validated several sample locations.

Samples were taken at these locations, and PolarX is awaiting confirmation of assay results.

Assay results for the historical data are plotted on the following maps, highlighting the very high-grade nature of mineralisation at both Black Canyon and Fourth of July, as well as surrounding areas. 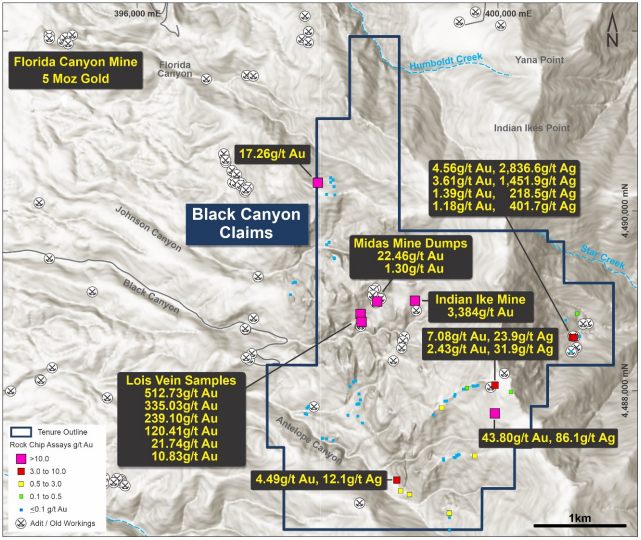 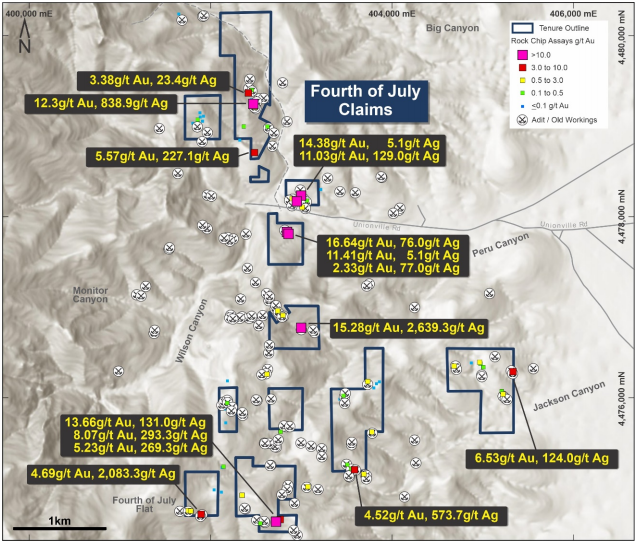 Of particular note are clusters of very high gold grades associated with narrow veins in the Indian Ike and Lois Vein mine dumps and veins in the centre of the Black Canyon Claims where bonanza gold grades have been identified.

Of the 227 samples previously collected on the Humboldt Range claims, 44 returned assays over 1 g/t Au, of which 19 were above 10g/t Au.

The mineralogy, assay results and geological setting are all consistent with low-sulphidation epithermal mineralisation, typified by laminated quartz veins in altered and locally mineralised volcanic rocks as shown below. 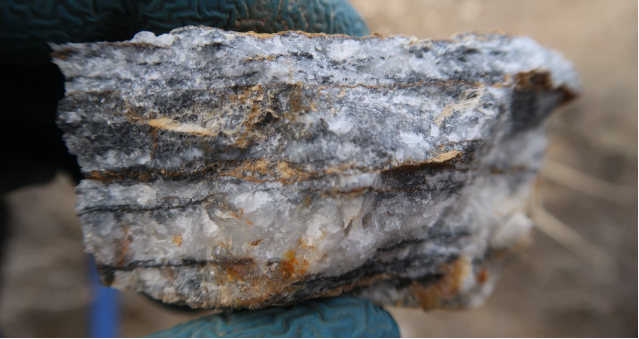 Within the structural corridors, there are hundreds of quartz-sulfide veins that carry visible gold and which range in width from 5 centimetres to over 1.5 metres.

Previous studies have indicated that the strongly altered host rock can also carry good gold values up to 2 metres away from 20-30 centimetre wide veins.

In addition to evaluating individual high-grade veins as possible mining targets, PolarX intends to evaluate these structural corridors to determine if modern-scale bulk mineable widths and grades are present.

This will include geological mapping, rock chip and channel sampling and ground geophysics with IP used to detect resistivity highs associated with the silicification.

PolarX has commenced staking approximately 100 additional lode claims in the Fourth of July area to consolidate the land holdings, and given the initial positive response to the acquisition, one would expect that the successful expansion of the group’s territory should provide share price momentum.