Pacific American Coal (ASX:PAK) has sold its remaining 30% stake in GCI, a coal exploration and development company, in order to fully concentrate on its flagship Elko Coking Coal Project in British Columbia, Canada.

PAK completed a “strategic review” of its activities and decided to sell its stake in GCI for A$1 million (US$720,000) in order to raise development capital for Elko. The sale means that PAK recovers its entire initial investment amount of US$731,250 which it now intends to deploy at Elko to advance exploration.

The proceeds from the sale will be paid incrementally over the forthcoming two years, commencing in January 2017. Until the entire sum is repaid, PAK is able to retain a Board position at GCI and maintains full voting rights until the outstanding amount is repaid. As a safety measure, PAK will receive an 8% premium on any outstanding payments in addition to a 4% penalty rate for late payments.

PAK’s coal exploration is progressing well seeing its summer work program at the ELKO Project rewarded, with the announcement of its maiden JORC Resource of 257 million tonnes.

However, the US coal downturn has seen coal production levels fall to their lowest levels since 1986 with the closure of 264 mines in the US. PAK says this factor has forced it to “limit its investment in this sector, and to review all of its US projects to ensure the longer term viability of the company.”

To assist in this, PAK says it has “implemented a swathe of initiatives to help reduce overheads and ensure the business can conserve cash to weather the downturn in the current market conditions”.

Coal prices have been under severe pressure for several years under the weight of oversupply and lower demand for energy globally. Particularly detrimental to the coal industry was/is the sharp pullback in demand for steelmaking and the introduction of alternative energy sources that continue to erode coal’s dominance as the prime fossil fuel on the planet.

Metallurgical coal prices have started to show signs of upward mobility, rising from around $78/t at the start of the year, to around $100 today.

PAK sees this recent improvement as a cue to accelerate development of its North American asset portfolio and has therefore taken steps to focus all its energy on Canada rather than America.

According to a company statement to shareholders, PAK said “The recent increase in coking coal prices has resulted in renewed interest from Asia in potential off-take arrangements”.

With its coal exploration hopes boosted by improving prices, PAK is determined to accelerate its exploration schedule. First on the agenda is improving its official JORC Resource definition, first announced in November 2015. Next, PAK must prepare a ‘Notice of Works’ to obtain the required permits from Canadian authorities. And finally, PAK is already working on its conceptual mine design, layout and infrastructure which will be summarily added to its permitting application.

PAK’s most recent development timetable indicates a Pre-feasibility Study (PFS) will commence sometime in Q4 2016 to be completed in mid-2017. 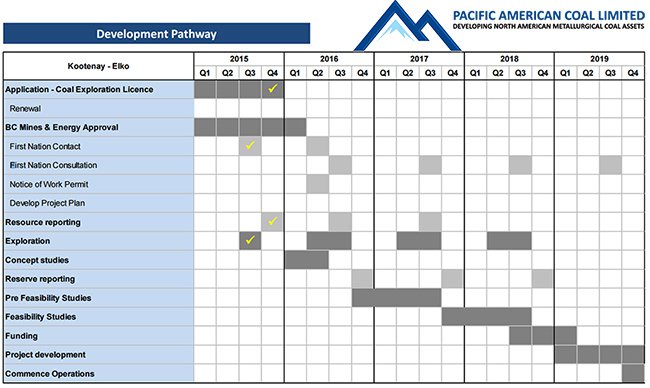 In addition to coal exploration in North America, PAK is also moving into the fledgling graphene market after entering into a Heads of Agreement (HOA) to take a controlling interest in Imagine IM, the leading Australian developer of graphene-based coatings for industrial textiles and fibres. Founded in 2014 by Chris Gilbey and Phillip Aitchison, the company develops commercial applications for graphene and associated advanced carbon based materials. Imagine IM is the first company in the world to develop conductive geomaterials using functionalised graphene.

Imagine IM intends to build Australia’s first commercial graphene manufacturing plant in the foreseeable future with a focus on geosynthetics.

The pilot plant will have an output capacity of up to 10 tonnes per year of graphene. Imagine IM plans to use two tonnes of the graphene output in the first year of operation for products aimed at customers in Australian manufacturing.

For PAK, Imagine represents a significant commercial stake in the developing graphene space and may make a material contribution to PAK’s bottom line once Imagine begins to generate sales revenues.