The news comes just days after it highlighted the significant progress it has made in the last three months, including a 20% increase in the global resource at Sorby Hills: a 53% increase in the total indicated resource to 16.6 million tonnes at 4.8% lead equivalent and 0.4% zinc through conversion of the Inferred Resource.

The total resource now stands at 36 million tonnes at 4.7% lead equivalent and 0.5% zinc.

These results confirm the possibility of a new zone of shallow mineralisation.

Significant shallow drill intercepts from both B Deposit and Omega deposit include:

The Phase 111 program was focused on shallow mineralisation above 100m depth, that may be mineable by open pit, at B and Omega deposits.

Phase III consisted of 49 reverse circulation holes for a total of 3,265m.

Most holes were inclined at 60° and drilled at 270° towards the west.

Looking at Omega specifically. Intersections support the estimated grades and targeted mineralisation geometry at the Omega deposit and have further confirmed the geological continuity of the mineralisation.

The Omega deposit remains open to the west and southeast towards the B deposit. 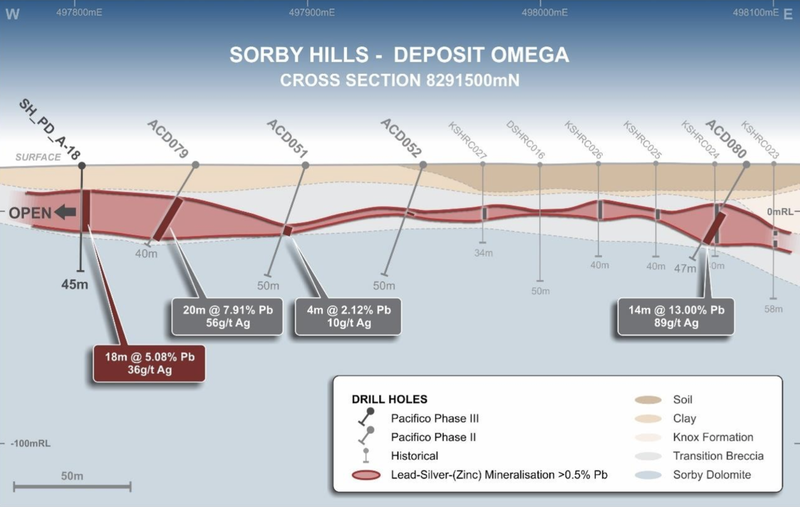 The B Deposit is considered contiguous and is particularly shallow with only 9m of cover to the top of the mineralised horizon. Most of it lies above 40m depth.

It is possible the B Deposit links up with the Omega Deposit to the north. Pacifico geologists are confident that the mineralisation can be extend incrementally during future drilling campaigns. 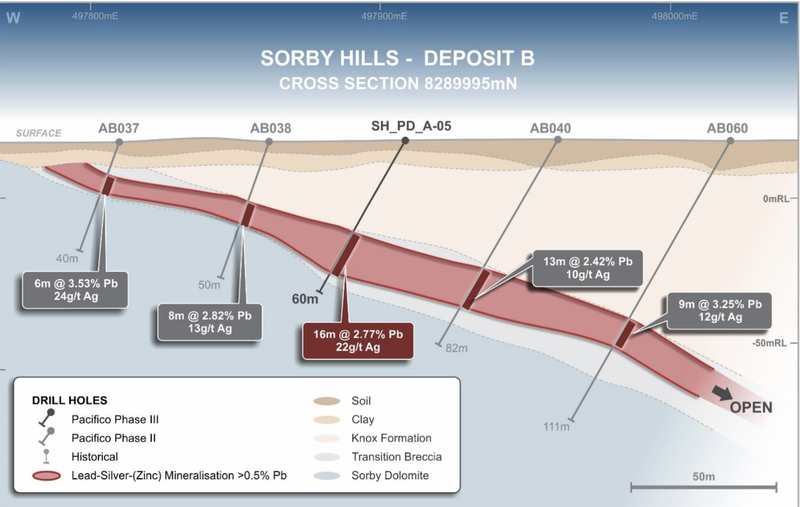 Interpreted geology section 8289995N, B deposit. The new drill hole confirmed the continuity of the mineralities.

Pacifico will continue its detailed review of the technical information to move the project forward.

It will also continue subsequent infill drilling and at the same time is focusing on delivering the PFS in the coming months.

The company is preparing for the next series of drilling campaigns to increase the mineral inventory.